Did Political Rallies Contribute to an Increase in COVID-19 Cases in India?

As the election rallies continued, the growth rate of average daily cases accelerated. The result is the explosion of cases that has overwhelmed the healthcare system. In the backdrop of the terrible human tragedy unfolding in India, a fierce debate is playing out in the media: Did political rallies contribute to the tsunami of COVID-19 cases that has overwhelmed the rickety healthcare system since the middle of April 2021?

The answer seems obvious. Large gatherings of people without masking and physical distancing, no matter the purpose of the gathering, can transmit the virus that causes COVID-19.

Political rallies in all the five states that witnessed assembly elections in the last few weeks were large gatherings of people. Newspaper reports and TV coverage of these rallies provide overwhelming visual evidence that masking and physical distancing were almost completely ignored. Therefore it seems extremely likely that these events contributed to the rapid transmission of the virus and the subsequent rise in the number of COVID-19 cases.

To test this hypothesis, I collected data on daily confirmed COVID-19 cases in the top 25 states in India which together account for more than 99 percent of the daily COVID-19 cases today. I divided these 25 states into two groups. The first group, which I call ‘Election States’, consists of the five states that went to the polls from late March: Assam, Kerala, Puducherry, Tamil Nadu and West Bengal. The second group consists of the other 20 states; I call this group the ‘Non-Election States’.

Also read: What the SOS Tweets Tell us About the Second Wave of COVID-19 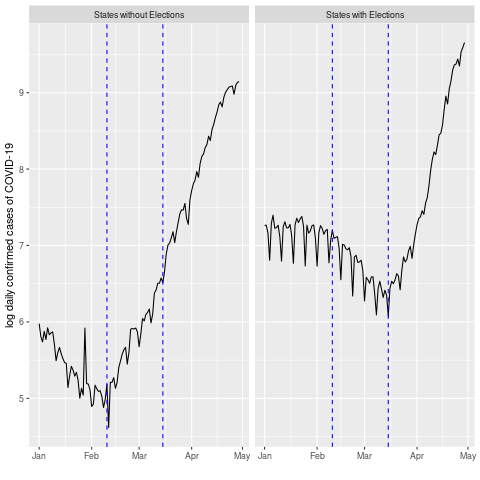 Figure 1. The black solid line in this chart is the logarithm of average daily confirmed cases of COVID-19 in two groups of states between 1st January 2021 and 29th April 2021. The vertical blue dashed lines are drawn to point to two dates, 10th February and 15th March. Source: Chart created by author using data from https://www.covid19india.org/

From mid-February, we start seeing differences emerge in the trajectory of the COVID-19 outbreak in the two groups of states.

The downward trajectory of daily COVID-19 cases is reversed in the Non-Election States on February 10. Since then, the average number of COVID-19 cases has been rapidly rising in the Non-Election States. This reversal was most likely caused by the incorporation of new variants of the virus into the Indian population and the letting down of the guard related to masking and physical distancing in states like Maharashtra, Karnataka and Gujarat.

The difference in the trajectories of the COVID-19 outbreak in the Election and Non-Election States lines up with the timing of the election process and provides evidence that election rallies contributed, at least in part, to the rapid rise in cases in many states in India.

By mid-March, election campaigning had kicked off in real earnest in all these states. Almost on a daily basis, these states now witnessed large gatherings of people in election rallies, without masks and without social distancing. This created a fertile ground for the rapid transmission of the virus across a wide section of the population. The trajectory of COVID-19 cases in these states reversed – from declining trajectories, we see rising trajectories since early March. As the election rallies continued, the growth rate of average daily cases accelerated. The result is the explosion of cases that has overwhelmed the healthcare system.

There are differences across the five Election States, as can be seen from the bottom panel of Table 1. The worst performer is Assam, where the growth rate surged from 10% to over 15.5%, before declining to 13.34%. West Bengal and Kerala are the next worst performers. Both Puducherry and Tamil Nadu manage to contain the spread much better than the other three states. Tamil Nadu is clearly the best performer, where the growth rate barely went above 7%.

The only sliver of positive news is that the growth rate of daily confirmed cases has started declining in all the Election States (as can be seen from the last column in Table 1). This is likely the result of the election process winding down across the five states and the welcome, if belated, response by political and administrative leaders to the dangers of mass gatherings in the context of the pandemic. But this only further reinforces the basic hypothesis that election rallies contributed to the surge of COVID-19 cases in India and visited this enormous tragedy on the people of the country.

If our political administrative leaders had even an iota of concern for the common people, then public health measures would have been more strictly enforced during election rallies and other mass gatherings and this man made tragedy of enormous proportions could have been avoided.

Deepankar Basu is Associate Professor in the Department of Economics at the University of Massachusetts Amherst.