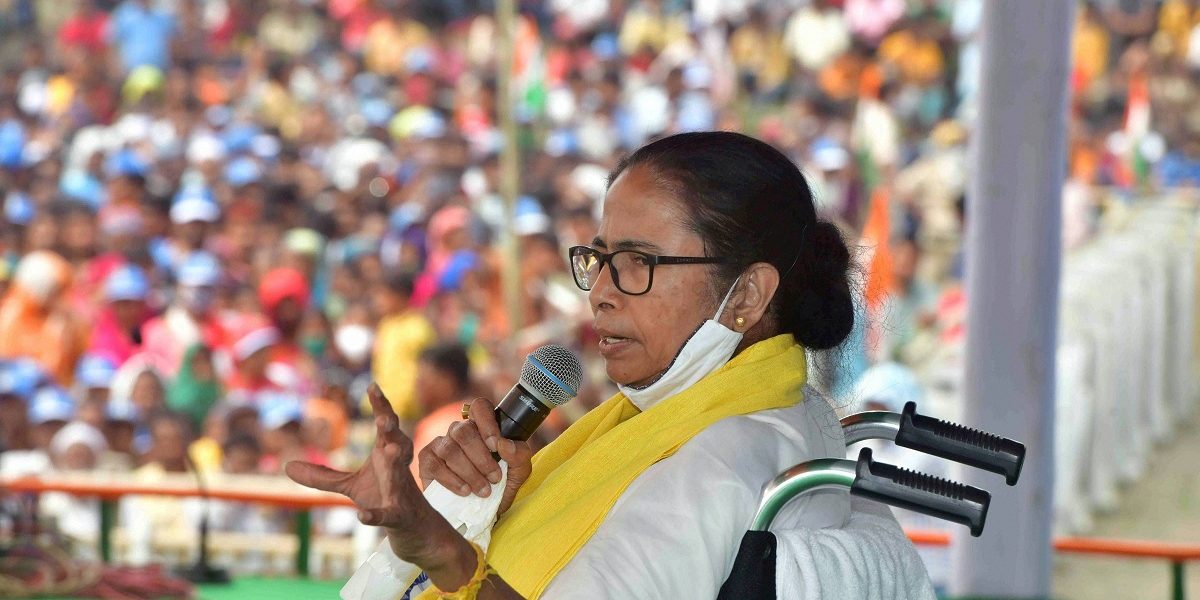 The EC’s ban will be in effect till 8 pm on April 13. The EC chose to ban Banerjee over her remarks against central forces and a statement which the EC alleges had “religious overtones,” PTI has reported.

“Commission hereby condemns such statements potent with serious law and order problems across the state(s) and sternly warns Mamata Banerjee and advises her to desist from using such statements while making public utterances during the period when Model Code of Conduct is in force,” the order said.

This is the last order signed by outgoing Election Commissioner Sunil Arora, NDTV has reported.

Indian Express has reported that the EC has said her speeches had been “highly insinuating” and “provocative” and that they had “serious potential” to lead to a law and order breakdown.

The EC also called her reply to the notice it sent her “devoid of substance,” according to its statement tweeted by ANI.

It is self-evident from the perusal of all reports that allegations mentioned in your hand-written note are factually incorrect, without any empirical evidence whatsoever&devoid of substance:ECI responds to CM Mamata Banerjee’s reply over her appeal for votes along communal lines pic.twitter.com/azxct7cVo4

Bengal is in the middle of eight-phase elections, which have seen campaigns unparalleled in attempts at communal polarisation.

In the last phase, four men died after the CISF fired and a BJP worker died after being shot at, in the same constituency of Sitalkuchi in north Bengal, leading to a continuous back and forth between Banerjee and Bharatiya Janata Party leaders, including Prime Minister Narendra Modi and Union home minister Amit Shah.

The EC had banned political leaders from visiting the area for 72 hours, which Banerjee had been critical of.

EC should rename MCC as Modi Code of Conduct!

BJP can use all its might but NOTHING in this world can stop me from being with my people & sharing their pain.

They can restrict me from visiting my brothers & sisters in Cooch Behar for 3 days but I WILL be there on the 4th day!

While Banerjee had brought up the CISF’s action and called it “genocide,” several BJP leaders including Modi, Shah and state president Dilip Ghosh also attempted to harness the situation in their election campaigns.

The state’s ruling Trinamool Congress has maintained through the process that the Election Commission has been acting on the behest of the latter and ignoring the complaints of TMC leaders.

The ECI’s decision against the chief minister was surprisingly prompt, and has led to many opposition leaders accusing the institution of a selective approach that invariably favours the BJP. They pointed out that the ECI hasn’t taken such a punitive decision against multiple BJP leaders who have been attempting to polarise the electorate on religious lines, and against whom complaints too have been filed.

The BJP leaders have been attacking the TMC government for its alleged policies of “minority appeasement”, which the TMC leaders have said this is an attempt to divide Hindus against Muslims.

As The Wire noted, recently, at a rally, Prime Minister Modi – addressing Banerjee – said that Trinamool Congress chief Mamata Banerjee recently said that “all Muslims should unite, and not allow their votes to be divided.” She had also appealed to Hindus not to fall victim to attempts at communalising the state but Modi ignored that part of her speech.

“You are saying…this means that you are convinced that the Muslim vote bank has also gone out of your hands, the Muslims have also turned away from you.”

He then said, “But had we asked the Hindus to unite and vote for BJP, we would have got eight or ten notices from the Election Commission. Editorials would have been written about us in the entire country.”

On poll day in Nandigram, April 1, Banerjee who is contesting from there had claimed that BJP workers were not allowing voting to take place and that villagers had complained that they were being stopped from voting by BJP. In a wheelchair, she visited the area of Boyal. Several members and supporters of BJP shouted ‘Jai Shri Ram’ at her. Banerjee remained inside a voting booth for two hours and lodged a complaint with the Election Commission.

Three days later, the Election Commission said that there “could not have been a greater misdemeanour” than Banerjee’s conduct.

Note: This is breaking news. The article will be updated as more information comes in.