Did the prime minister play fast and loose with Gujarat's allotment policy to get himself government land that he never intended to use in the prescribed manner? 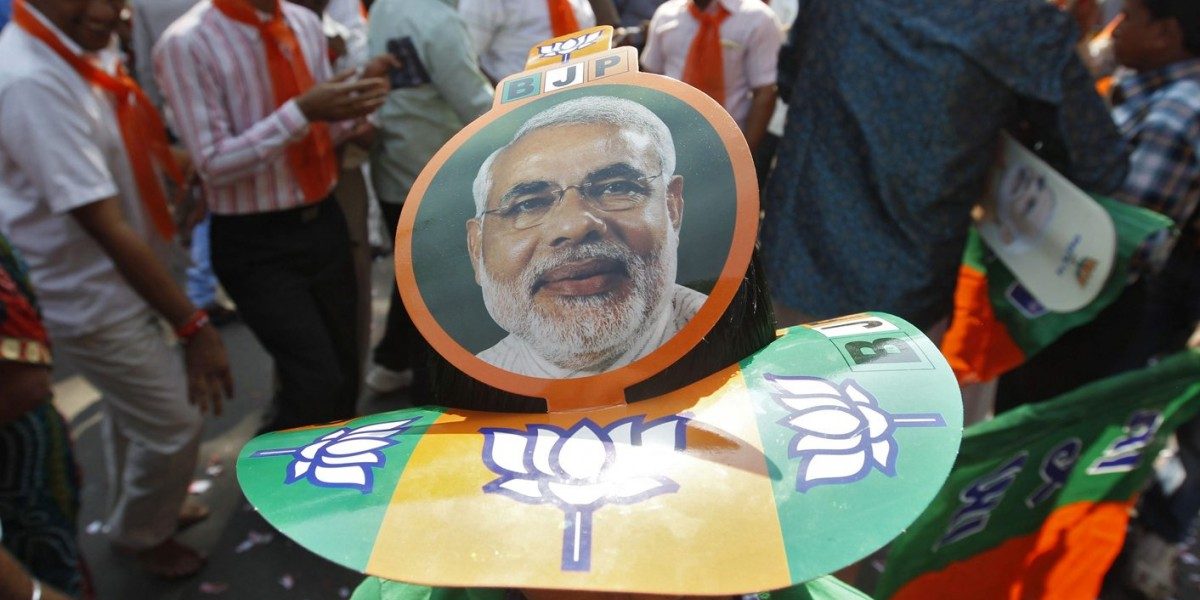 New Delhi: Over the past few days, a plot of land owned by the prime minister has suddenly become a topic of discussion. First, a PIL on the plot was filed in the Supreme Court. Then, in the ‘non-political’ interview Narendra Modi gave to actor Akshay Kumar recently, he spoke about his plot in Gujarat. And his party, too, has issued clarifications about how he came to own that land.

The residential plot, owned by Modi since 2002, became controversial when discrepancies regarding its ownership were found in his various election affidavits.

On April 26, 2019, when Modi filed his affidavit while seeking reelection from Varanasi, he admitted that the residential land he has owned in Gandhinagar, Gujarat since 2002 was “amalgamated” with three other adjoining plots in 2008. In effect, he tried to dismiss the allegation of discrepancy in his affidavits. 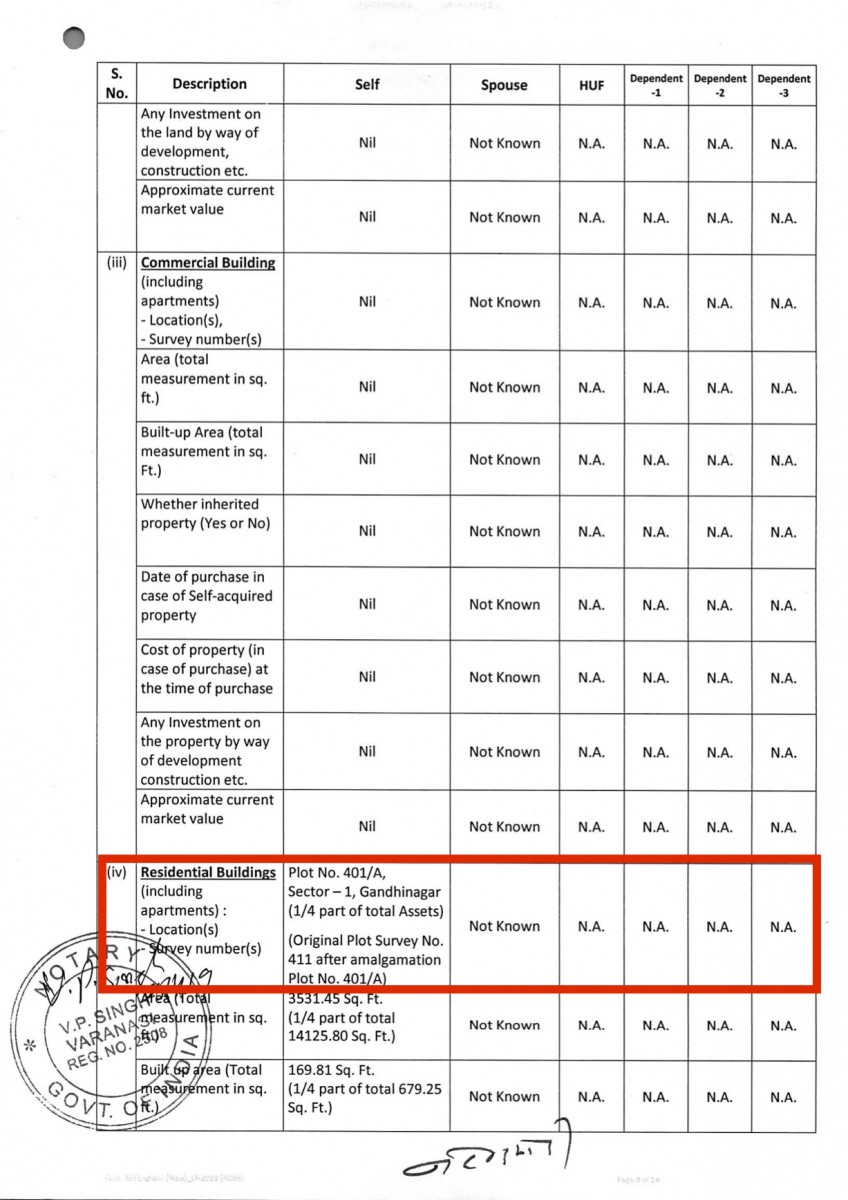 His admission came days after Saket Gokhale, a former journalist who now works as a marketing consultant, filed a public interest litigation in the Supreme Court alleging that Modi has – since 2007 – omitted crucial details about his land assets in his election affidavits. He also requested a judicial probe by a former chief justice of India into the matter.

The Caravan magazine too in an investigative story pointed out several discrepancies in the way Modi declared his land asset in many of his affidavits.

Modi’s affidavits before 2012 mentioned that he owned “Plot 411, Sector 1, Gandhinagar, Gujarat”. He also said that he bought the piece of land, covering 326.22 square metres, for Rs 1.3 lakh. If market rates are calculated today, its price would be somewhere around Rs 1.18 crore.

However, from 2012 onwards – when Gujarat went to the polls – Modi stopped mentioning the plot in his affidavits and instead declared that he was a quarter owner of Plot 401/A covering 326.11 square metres in the same sector. Curiously, Gujarat’s land records do not mention any plot numbered 401/A. The records say that Modi is still the sole owner of Plot 411 in Sector 1, Gandhinagar.

None of his affidavits, however, said how he acquired any of these plots, although his 2007 affidavit said that he purchased plot 411 on October 25, 2002. The mystery around this plot deepened as Modi never elaborated on how he acquired his property and why there were discrepancies in his multiple affidavits.

Modi LandRecord 411 by The Wire on Scribd


The matter got further attention when it was discovered that a quarter of the same plot of land – Plot 401/A – is also owned by Union finance minister Arun Jaitley. In his election affidavit of 2014, when he contested the Lok Sabha polls from Amritsar, Jaitley declared that he owned one-fourth of Plot 401/A, Sector – 1, Gandhinagar. In his other public filings like on the PMINDIA website, Jaitley, too, has been consistent in declaring this property.

Before 2014, Jaitley’s election affidavits were also different. In his 2006 affidavit for the Rajya Sabha election, the minister said that he was the sole owner of “Plot 401, Sector-1, Gandhinagar”, measuring 326.22 metres which he purchased for Rs 2.45 lakhs. However, unlike Modi, his affidavits and public filings mention that he was allotted this land by the mamlatdar in Gandhinagar in May 2003, and that he was a Rajya Sabha member from Gujarat at that time. He was also a Union minister in Atal Bihari Vajpayee’s cabinet.

The land records of Gujarat, which are publicly available, however, still state that Jaitley is the sole owner of Plot 401.

Jaitley_LandRecord_401 by The Wire on Scribd

How did they acquire the land?

Gokhale told The Wire that the Gujarat government has a policy of allocating land to the political and administrative executive at subsidised rates. Both Modi and Jaitley acquired their plots under that scheme. “While Jaitley purchased Plot 401 in 2003, Modi must have bought his plot in 2002, when he was the chief minister of the state.”

According to the Gujarat policy of land allotment, Modi first became eligible to acquire the subsidised land in 2001, when he became the chief minister. “Since then, Modi declared ownership of Plot 411,” Gokhale said.

Gokhale said that the Gujarat allotment policy has landed in one controversy after another ever since its implementation. Since 1969, the state government passed many resolutions to facilitate the allotment of public land to the state’s executive. In 1988, the state government made the policy stricter by disallowing any sale or renting out of the allocated land. The resolution also mandated that a person buying a plot would have to build a house there within two years and stay there.

However, some bureaucrats protested the move since they felt that the property would be of no use to them if they were transferred or chose to stay outside Gujarat after retirement.

Thus, in 1999, the government relaxed some norms and allowed the sale of such land with the collector’s permission. “However, in case someone sells the plot, she or he had to deposit 50% of the market value of the land in the collectorate,” Gokhale said.

Meanwhile, in 2000, the Gujarat high court took suo motu cognisance of irregularities in the allotment process and a year later, in 2001, reversed the relaxations. But the state government challenged the high court decision at the Supreme Court, which then stayed the lower court’s order. Thus, in effect, the allocations of land continued under relaxed norms.

Meanwhile, an advocate Maulin Barot, The Caravan reported, filed a new petition before the Gujarat high court pointing out irregularities in the allotment process. When the high court dismissed the petition, he moved the apex court. In 2012, the Supreme Court directed the high court to dispose the suo motu case as soon as possible and prohibited further allotments or permission to transfer ownership of plots already allotted.

The Caravan noted that in this order, the Supreme Court recorded the state government counsel Meenakshi Lekhi’s claim. She had said that the Gujarat government “has not made any fresh allotments after the year 2000”.

“If Lekhi is to be believed, the question, therefore, arises: How were both Modi and Jaitley allotted their plots by the Gujarat government in 2002 and 2003 respectively?” Gokhale said.

SC Order Transferring Case by The Wire on Scribd

He said that while the both apex court and high court hearings were going on, the “Gujarat government changed the land allotment policy again”.

“In this resolution, it extended the allotment benefits to high court judges,” he said.

“Interestingly”, he said, “around 14 judges of the high court recused themselves of the suo motu case after this.”

When Gokhale moved the Supreme Court alleging discrepancies in Modi’s election affidavits on April 15, 2019, the Congress attacked the BJP. This forced the BJP to address the issue. On Twitter, it issued a clarification on how the original plots of both Jaitley and Modi were amalgamated into one.

Similar charge is made against the Finance Minister. There is a limit to trivialisation. Four plots purchased by four different persons were amalgamated into one on 25.4.2008. Obviously, the number of the amalgamated plot is different from the separate individual numbers.

The caravan of falsehood moves on. There is a bankruptcy of issues in the Congress Party. Today’s election issue was that the number of the plot owned by the PM (his only asset) is now shown differently numbered from what was shown earlier.

However, the party refrained from divulging any details about why the plots were amalgamated or who the other two partners were.

However, in what it called “An informal note – The life of Prime Minister Shri Narendra Modi: an example of simple life, high thoughts”, the BJP circulated unverified claims that Modi has donated most of his earnings to social causes.

One of the claims said, “Upon completion of his tenure as CM of Gujarat, Narendra Modi donated Rs 21 lakh from personal savings for educating Gujarat government staffs’ daughters.”

BJP Statement AkaInformal Note by The Wire on Scribd

On April 24, Modi cleared the air around this controversy in his interview with Akshay Kumar. In the interview, which Kumar claimed was “candid and completely non-political”, Kumar first asked a question from the “informal note”.

Referring to his act of generosity, Kumar asked, “Modiji, I’d like to know … I have heard that when you went from being chief minister of Gujarat to prime minister, you had savings amounting to about Rs 21 lakh, as your bank balance. And you distributed this among the daughters of your staff members.”

The prime minister then replied that he had, in fact, given Rs 21 lakh but it was only a part of his savings, not the full amount.

He then went on to talk about the plot he purchased during his chief ministerial tenure in Gujarat. He said, “In Gujarat, the government provides a plot to an MLA.” He added that he had purchased the plot at subsidised rates. He then said that he had told his party (BJP) that he wanted to donate the land to it as he did not want it. Kumar did not ask Modi why be opted to buy the land at a subsidised price when he did not want it in the first place.

Modi then went on to clarify that during the process of handing over the plot to the party, he learnt about the Supreme Court case which prohibited any transfer of ownership of that plot. He continued: “Once the issue is settled, I have decided to give away the plot to the party.”

On April 26, when Modi filed his election affidavit from Varanasi, he added a small element which he hadn’t before. Along with stating that he owned Plot 401/A, he also said that this plot was “Original Plot Survey Number 411 after amalgamation Plot 401/A”.

His acknowledgement means that Modi purchased the plot only seven months after he became an MLA. He was appointed the chief minister of Gujarat in 2001 and became an MLA in February 2002, making him eligible for land allotment. And as he stated in his 2007 affidavit, he acquired the land in October 2002.

Gujarati_Modi 2007 Affidavit by The Wire on Scribd

Neither Modi, Jaitley or their party has declared the other two co-owners of the plot 401/A. Gokhale told The Wire that when he visited Gandhinagar, he found a compound wall around four plots – 401, 411 (belonging to Jaitley and Modi), 403 and 410 – that were supposedly amalgamated. 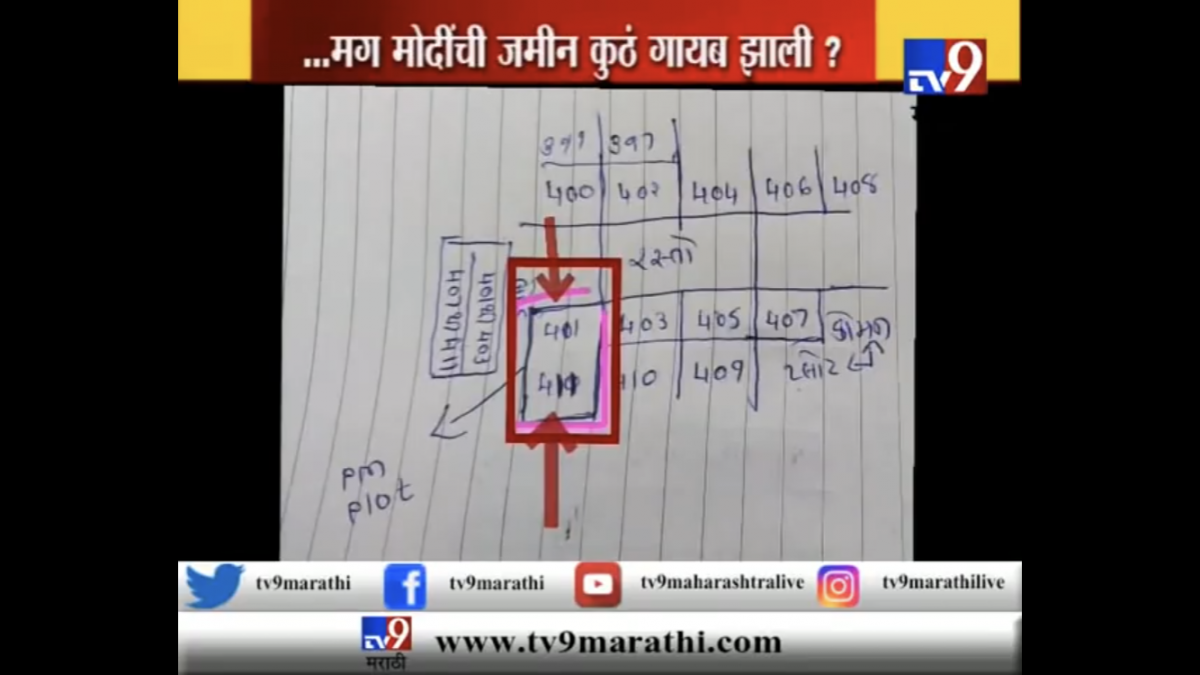 “There is no listing of amalgamation of these four plots even in the latest land records,” Gokhale said.

He said that the owners of plot 410 and 403 were recorded as one Prafull Goradia, a former BJP leader who lives in New Delhi, and former BJP president K. Jana Krishnamurthy, respectively.

PrafullGoradia_LandRecord_410 by The Wire on Scribd

JanaKrishnamurthi_LandRecord_403 by The Wire on Scribd

“One can understand the logic of amalgamation. In a joint property, every owner is allowed use of the entire property. In case of death of one of the owners, his or her share passes on to the co-owners who are still alive,” he said, adding that the BJP has still not given any clarification on this.

He said if Modi wanted to donate his plot to the party, as he claimed in his interview with Akshay Kumar, “Why would he amalgamate his plot with others?”

“Once the land is amalgamated, Modi would now need consent from all the three co-owners to hand over his share to the BJP,” Gokhale wondered.

He also said that transferring ownership of the plots allotted by the government in Gandhinagar is prohibited and is not subject to judicial review. “Government land records clearly mention that those plots are meant for residential or charitable purposes,” Gokhale said. A bare reading of this provision suggests it would be impermissible for a political establishment to come up on the plot.

Also, most importantly, the question remains that if Modi was allotted the plot in 2002 and Jaitley in 2003, why did Meenakshi Lekhi tell the SC that no fresh allotments were made by the Gujarat government after the year 2000? This is one of the questions Gokhale hopes a judicial probe will be able to answer.