Curiously, while the EC is now insisting on pre-certification of NaMo TV's contents, it has not yet registered a criminal case against the channel and its owner/beneficiary for violating the RP Act. 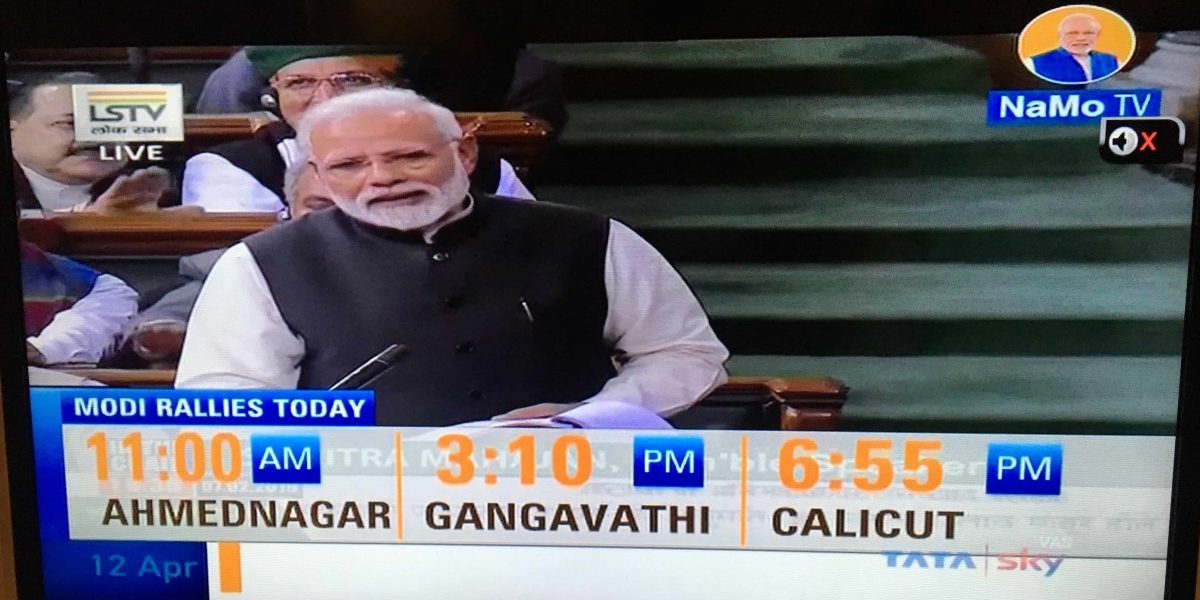 NaMo TV continues to broadcast, at least as of the morning of April 12, 2019. Credit: The Wire

The Bharatiya Janata Party’s attempts to exploit loopholes in India’s election and broadcast laws by floating a promotional TV channel on the eve of the election may boomerang on it with the Election Commission’s characterisation of NaMo TV as ‘political advertising’ opening the door to the prosecution of its top leaders.

The use of television for election-related publicity by political parties is guided by two sets of rules:

(1) A 2004 Election Commission order requiring a monitoring committee to “preview, scrutinise and verify all advertisements by individual contesting candidates or political parties, before they are inserted in the electronic media”, and

(2) A strict ban on the “display of any election matter” on TV during the 48 hours preceding the close of polls, as specified by the Representation of People Act, 1951. To ensure there is no ambiguity about the expression “election matter”, the RPA defines this as “any matter intended or calculated to influence or affect the result of an election”.

The EC has the power to stop parties from using advertising material that has not been submitted for scrutiny. However, a violation of the 48 hour ban is a more serious matter – it is a criminal offence which “shall be punishable with imprisonment for a term which may extend to two years, or with fine, or with both.”

On March 31, the Bharatiya Janata Party launched NaMo TV, a 24 hour television channel devoted entirely to promoting the electoral prospects of the party and its prime minister, Narendra Modi.

On the day the channel was launched, Modi urged his 46 million Twitter followers to watch it:

The day we were most looking forward to is here!

At 5 PM, lakhs of Chowkidars from different parts of India will interact in the historic #MainBhiChowkidar programme.

This is an interaction you must not miss.

Watch it live on the NaMoApp or NaMo TV. pic.twitter.com/XXKkLUuE7X

Modi has also publicised NaMo TV through his official YouTube page.  In an interview to the Indian Express, Amit Malviya, head of the BJP’s IT cell, said “NaMo TV is a feature of NaMo app which is run by BJP IT cell.”

While the NaMo app may be “run by the BJP IT cell”, it is actually owned by “Narendra Modi”. By the party’s own admission, therefore, Modi is the effective owner of NaMo TV since the channel is “a feature of the NaMo app”.

On the night of April 11, after sitting on the issue of NaMo TV for several days, the Election Commission finally conceded that NaMo TV’s content comprises “political advertisements” and “political publicity materials”.

Having reached this conclusion, however, the EC restricted itself to directing the chief electoral officer (CEO), NCT of Delhi, to ensure that the requirement of pre-certification of this content be strictly complied with.

Curiously, the EC is totally silent on the more serious implication of its finding: since NaMo TV continued to broadcast political publicity – “election matter”, as defined by the RPA – during the 48 hours preceding the close of polls for the first phase of the general election on April 11, the BJP is guilty of breaking the law.

This is what section 126 of the RP Act says:

126. Prohibition of public meetings during period of forty-eight hours ending with hour fixed for conclusion of poll.—(1) No person shall—

(a) convene, hold or attend, join or address any public meeting or procession in connection with an election; or
(b) display to the public any election matter by means of cinematograph, television or other similar apparatus; or
(c) propagate any election matter to the public by holding, or by arranging the holding of, any musical concert or any theatrical performance or any other entertainment or amusement with a view to attracting the members of the public thereto, in any polling area during the period of forty-eight hours ending with the fixed for the conclusion of the poll for any election in the polling area.

(2) Any person who contravenes the provisions of sub-section (1) shall be punishable with imprisonment for a term which may extend to two years, or with fine, or with both.

(3) In this section, the expression “election matter” means any matter intended or calculated to influence or affect the result of an election. (emphasis added)

Under the provisions of this section, NaMo TV should have gone off air for 48 hours beginning 5 pm on April 9. However, it continued to broadcast Modi’s and the BJP’s election matter throughout the mandatory blackout period, reaching viewers in the 91 seats where voting took place on Thursday.

Indeed, as of early morning, April 12, NaMo TV continues to be available on television sets across India despite the lack of pre-certification of its content by the monitoring committee.

On the morning of April 11, the CEO of Delhi took the view that since NaMo TV was running speeches and interviews of Modi that were already in the public domain, these were not advertisements and thus did not warrant pre-certification. This despite the fact that the BJP is clearly paying DTH operators to carry the channel.

While the EC has now overruled the CEO of Delhi and insisted on pre-certification, it has not yet registered a criminal case against NaMo TV and its owner/beneficiary for violating the RP Act.

Should the EC follow its constitutional mandate to its logical conclusion, criminal charges must surely be laid against those responsible for blatantly flouting the law. Whether the commission will go after Modi or BJP president Amit Shah or some third person – or no one at all – remains to be seen. At stake is the credibility of the Election Commission, the three election commissioners, and the electoral process itself.