Political families exist across the country and in many parties. And until Indian democracy matures, the people will have to put up with such dynasties.

India may boast of being the world’s largest democracy, but in reality, it has turned into a ‘dynastic democracy’.

As a political commentator aptly put it, “While the US is known for its presidential democracy and Britain for its parliamentary democracy, India should be known for its dynastic democracy.”

Whether such a description is good or bad is a different matter altogether. What is for certain, however, is that at the Centre and in the states, one ‘family’ or the other is playing dynasty politics, with their footprints growing over time.

Apologists argue that if children of lawyers and doctors can follow their parents’ footsteps into a career, why should one object if the progeny of politicians take up the same trade.

Congress vice president Rahul Gandhi posed this question at a recent talk at the University of Berkeley in the US, sending his detractors up in arms. Information and broadcasting minister Smriti Irani even called Gandhi a “failed dynast”.

The BJP has sought to put the Congress, led by the ‘first family’, in the dock, with even new alliance partners, like Bihar chief minister Nitish Kumar, joining in.

But barring the Left parties, almost all political parties are participants in the dynasty game. However, it must be acknowledged that it is the Congress that has led the way.

Rahul has followed in the footsteps of his family by joining the Congress. His great-great-grandfather Motilal Nehru was the president of the party, as were his great-grandfather Jawaharlal Nehru, grandmother Indira Gandhi and father Rajiv Gandhi.

His mother Sonia Gandhi has been at the helm of the grand old party for nearly two decades. She succeeded the late Sitaram Kesri in early 1998. Such continued rule of a party by one family has seldom been seen in any other parts of the world.

Yet, recent political developments have shown that the party’s fate being tied so closely to that of the Gandhi family may no longer serve its best interests. After all, the Congress won only 44 seats in the 2014 general election, its lowest ever showing.

Rahul could become the Congress president as early as next month. He has now given indications that he is not averse to becoming the prime minister, if the opportunity arises. His sister, Priyanka Gandhi Vadra, is often considered the ‘most charismatic’ of the Gandhis at present, but has limited her role in politics. But when her son was born in 2000, then Congress spokesman Ajit Jogi was quick to distribute sweets at the All India Congress Committee headquarters, proclaiming that ‘our future leader is born’.

Fadnavis’s predecessor from Congress, Prithviraj Chavan, also hailed from a political family. His father Anandrao Chavan was Union minister in Indira Gandhi’s rule, while his mother Premalakaki was later the Maharashtra PCC Chief. Prithviraj Chavan’s predecessor was Ashok Chavan of the Congress. Ashok, who is currently the Maharashtra PCC chief is the son of the late S.B. Chavan, a former chief minister and Union home minister.

In fact, Congress in Maharashtra had earlier seen a complex web of powerful relatives helping each other politically and maximising their influence.

BJP guilty of dynasty politics too

Despite the BJP crying hoarse about the Congress and dynasty politics, the ruling party, and its alliance partners, is full of dynasts.

In Rajasthan and Chhattisgarh, the sons of serving BJP chief ministers are MPs. Dushyant Singh, the son of Rajasthan chief minister Vasundhara Raje, is the MP from Dhaulpur, which his mother represented for many years. Vasundhara’s sister Yashodhara Raje is a minister in Madhya Pradesh. Her mother, the late Vijayaraje Scindia, was an MP from Madhya Pradesh and was among the founder members of the BJP. She was also associated with the erstwhile Jan Sangh.

Vasundhara’s brother, the late Madhavrao Scindia, was a Congress leader, whose son Jyotiraditya Scindia is now the Congress chief whip in the Lok Sabha and a prominent aspirant for the position of Madhya Pradesh Congress Committee (PCC) chief, ahead of the assembly polls next year.

Former Himachal Pradesh chief minister and BJP leader Prem Kumar Dhumal’s son Anurag Thakur is also a MP and had been an office bearer in the BCCI.

Maharashtra chief minister Devendra Fadnavis is the son of the late Gangadharpant Fadnavis, who was a member of the state legislative council. His aunt Shobha Fadnavis was a Maharashtra minister.

The daughters of the late BJP leader Gopinath Munde, who was also Maharashtra deputy chief minister, are in politics. His elder daughter Pankaja is a senior minister in Maharashtra, while her sister Pritam has been elected from Beed, her father’s constituency. Poonam Mahajan, Munde’s niece and the daughter of the late Pramod Mahajan, is also a MP and head of the BJP’s youth wing. 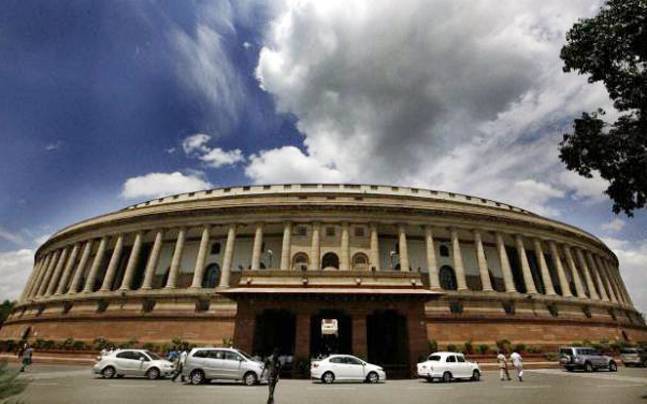 What the people of India need and deserve is not necessarily given by the political parties. Credit: PTI

Nearly two dozen people related to Mulayam Singh Yadav hold some political position or the other. His son Akhilesh was the chief minister of Uttar Pradesh for five years, while his brother was a senior minister in the state for several years. Of the five MPs of his party, four are from his family, including his daughter-in-law Dimple Yadav.

RJD leader Lalu Prasad Yadav too has many family members in politics. In fact, when the fodder scam threatened his chief ministership, he brought his wife Rabri Devi in his place. One of his sons, Tejaswi, served as Bihar’s deputy chief minister until recently, another was a senior minister in the state, while his daughter Misa Bharati is a Rajya Sabha MP.

Ram Vilas Paswan, whose rise, like that of Mulayam and Lalu, is linked to the Janata Party days, is a minister in the Narendra Modi government. His son Chirag Paswan and brother Ramchandra Paswan are among the handful of MPs of the Lok Janshakti Party party while his other brother, Pashupati Paswan, is now a minister in the Nitish Kumar government in Bihar.

Down south, Tamil Nadu has seen political families flourish. M. Karunanidhi has been the chief minister several times. His son M.K. Stalin is currently the leader of the opposition in the state and is seen as a future chief minister.

Tamil Nadu also boasts of the legacy of M.G. Ramachandran, whose wife Janaki became the chief minister after his demise but subsequent elections saw Jayalalithaa take forward his political legacy.

The issue of Telugu pride brought superstar N.T. Rama Rao from the green room of the film studio to the room heading the undivided Andhra Pradesh cabinet in the early 1980s by forming the TDP. His son-in-law and current Andhra Pradesh chief minister N. Chandrababu Naidu took forward this political legacy. His son Lokesh is the rising star in the state cabinet.

Similar is the story in neighbouring Telangana. The son of TRS leader and chief minister K. Chandrasekhar Rao, K.T. Rama Rao, is seen as the rising star in the party. His daughter Kavitha is also a Lok Sabha MP.

Andhra Pradesh is home to another political family. Y.S. Rajsekhar Reddy of the Congress became the state strongman when he became chief minister in May 2004. He retained power in 2009 but passed away soon after in an accident. His son Y.S. Jagan Mohan Reddy has since left the Congress and has floated his YSR Congress Party.

In Odisha, BJD leader and chief minister Naveen Patnaik is carrying forward the legacy of his late father and Janata Party stalwart Biju Patnaik. A colourful personality, Bijuda started his politics from the Congress and later moved to the Janata Party. His legacy is so great that although Naveen was not in politics when his father died and does not know much Oria, he had been the undisputed leader in the state for nearly two decades.

Punjab chief minister Amarinder Singh also heads a political family. His wife Prenit Kaur was a Union minister in the UPA government while their son is also in politics.

In Maharashtra, the Shiv Sena has remained in the control of the Thackeray family. Founded about 50 years ago by Bal Thackeray on the ‘son of the soil’ issue, the Sena is now lead by his son Uddhav while his grandson Aditya heads the youth wing. The party split, with nephew Raj Thackarey forming the Maharashtra Navnirman Sena when he realised that the uncle is passing the baton to his son.

Nationalist Congress Party supremo Sharad Pawar also heads a political family. His daughter Supriya Sule is a MP while his nephew and former deputy chief minister Ajit Pawar is an MLA from the Baramati assembly segment.

In Karnataka, former Prime Minister H.D. Deve Gowda of the Janata Dal (Secular) has sought to carve out a niche for his family amid the tussle between the Congress and the BJP. His sons H.D. Kumaraswamy and H.D. Revanna are active in politics with Kumaraswamy also being the chief minister like his father.

In West Bengal, chief minister Mamata Banerjee is being accused by her detractors of promoting her nephew Abhishek Banerjee in the ruling Trinamool Congress.

Dynasty a theme in Indian politics

There are many examples of political families ruling the roost across the states but digging deeper shows that the malaise goes as far as the village level too.

The BJP may cry foul over the Gandhi family, but if it was truly against the dynasty culture in Indian politics, it would not have allowed ‘political families’ to proliferate in its own backyard. Interestingly, to checkmate the Gandhis, the BJP brought in Maneka Gandhi and her son Varun.

This ‘dynastic culture’ in Indian politics is no longer a mission but a profession. The priority of present-day politicians isn’t service to the nation. Often, it is the quest for power that brings them into politics. To hold on to power, the politician finds nothing better than promote their own family.

Until Indian democracy matures, people will have to put up with dynasties whether they like it or not. A state funding of elections could bring in more fresh blood in the system with new ideas and new aspirations, without the family tag.

Indian politics is passing through a transition and ‘promoting the family’ appears to be an invariable part of it right now. The Congress will continue to be under attack on the ‘family’ issue until it takes steps to bring in new leaders at all levels.

Vice president M. Venkaiah Naidu’s remark that “dynasty is nasty” has, in one stroke, condemned all political parties practicing, including the BJP.