Shah's statement came at a time when messages critical of the ‘Gujarat model of development’ in the poll-bound state were being circulated on social media. 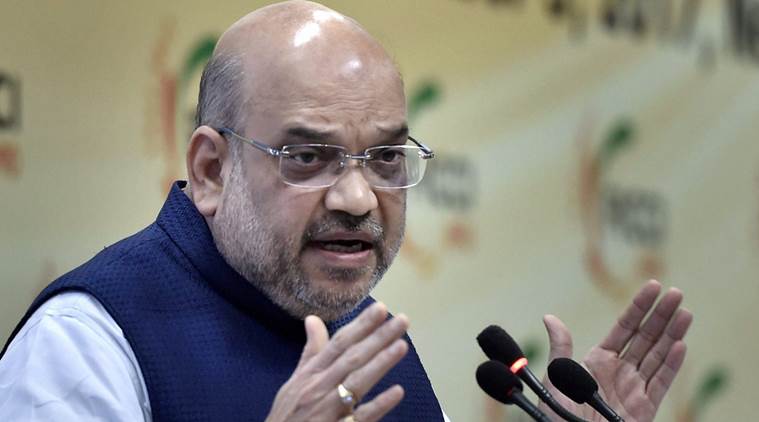 New Delhi: BJP president Amit Shah on Sunday asked the youth of Gujarat not to fall prey to the anti-BJP propaganda being mounted by the Congress on social media. Shah’s statement came at a time when messages critical of the ‘Gujarat model of development’ under the BJP rule in the poll-bound state were being circulated on social media. During his interaction with youths at ‘Yuva Townhall’, Shah also came down heavily on the Congress and its vice president Rahul Gandhi, who had recently visited the city and questioned the BJP over its development claims.

Replying to questions, Shah touched upon issues such as implementation of the Goods and Services Tax (GST), unemployment and demonetisation, and claimed that the Narendra Modi government has brought in substantial change during its three-year rule.

“I appeal to the youth not to blindly believe the anti-BJP propaganda being spread on WhatsApp and Facebook. Before making any judgement, you need to do analysis of what was Gujarat before the BJP came to power and what is the situation today,” said Shah.

“This propaganda is largely spread by our opponent Congress,” the BJP president claimed.

Responding to a question about the BJP government’s achievements in Gujarat, Shah shared several figures about growth in agriculture sector, increase in per capita income, rise in the size of state budget, increase in the number of universities and several other parameters to prove his point that significant development took place after 1995.

The BJP first came to power in Gujarat in 1995.

“I want you to apply your mind before believing what is being circulated in WhatsApp. Just compare what kind of development took place before the BJP came to power and afterwards. These figures will clearly tell you that it was the BJP which did development,” claimed Shah.

He added that these figures related to the development in Gujarat will be uploaded on the BJP’s website so that youths can circulate it on social media to counter the propaganda.

“Before 1995, when the Congress was in power, curfew and communal riots were rampant. Even the Rath Yatra was attacked. Power cut of 10 to 15 hours was normal in rural parts of state during the Congress rule. But today, every part of the state is getting 24-hour uninterrupted power supply,” Shah said.

“Rahulbaba (Congress Vice President Rahul Gandhi) recently came here and raised question about development. I want to tell him that the venue of his event, the Sabarmati Riverfront, was nothing short of a pit of dirty water when the Congress was in power. Today, it is considered as the best riverfront in the world,” the BJP chief added.

]”Gujarat’s per capita income was just Rs 13,665 before 1995. Today, it is Rs 1.41 lakh. Is this not development Rahulbaba?” asked Shah, adding that the people of Gujarat should not get carried away by the false claims of the Congress and its leaders.

Responding to a question related to the BJP’s approach towards creating more employment, Shah said the method of calculating employment in the country needed to be changed.

“I believe that employment should not be linked only with jobs. You can’t give jobs to 125 crore citizens. Employment should also mean self employment, start-ups or starting a small business. Thus, the method of calculating the employment generation, which solely takes into account job creation, should undergo change,” the BJP chief said.

Responding to a question on the GST and its benefits, Shah said the BJP government at the Centre was trying its best to make it more trader-friendly.

“We know that some (traders) are facing difficulties due to GST. But, the government is aware about it and understand your problem. The GST Council can always change the rules. Our aim is to make GST trader-friendly,” he said.

Responding to a question on demonetisation and its success, especially when the RBI has declared that almost 99 per cent notes have came back, Shah said the exercise was aimed at pushing the country’s economy forward by increasing the number of tax payers.

“Prior to demonetisation, only 3.6 crore people used to pay income tax. But now, it has risen to 6.3 crore. This shows that people are becoming honest. It is very easy to criticise something. But, demonetisation was an attempt to boost the country’s economy by increasing the number of tax payers,” he said.

Over one lakh youths sitting in 312 different locations across Gujarat saw the event live while some of them even asked questions through video-conferencing.