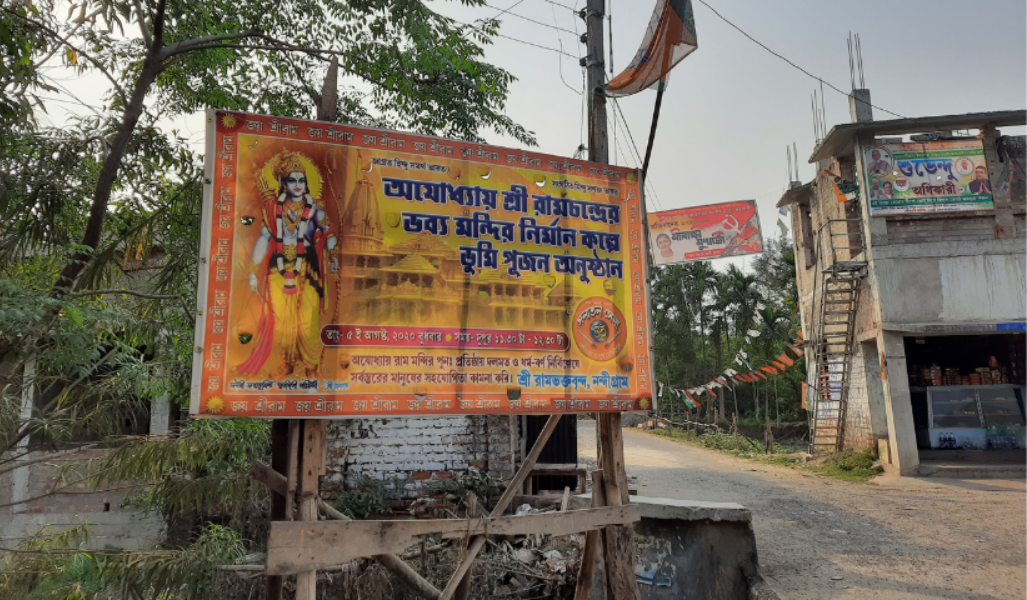 Money for the Ram Temple has been raised from devotees across India, In this photo, a hoarding in Nandigram invited people to join the worship of Ram on August 5 to celebrate the laying of the foundation stone of Ram Temple in Ayodhya. Photo: Snigdhendu Bhattacharya

New Delhi: Two opposition leaders in Uttar Pradesh on Sunday released sale deeds indicating that the Ram temple trust had likely paid an inflated amount for a plot of land it purchased in March 2021 out of donations collected from lakhs of Hindu devotees eager to contribute towards the construction of a new Ram temple in Ayodhya.

The Shri Ram Janmbhoomi Teerth Kshetra is a 15-member trust set up for the construction and management of the Ram temple in Ayodhya by the Government of India after the Supreme Court in 2019 ruled in favour of its construction at the site of the Babri Masjid.

The land in question, covering an area of 12,080 sq metres or 1.208 hectares, is situated at Bagbijasisi village under Haveli Awadh Pargana in Sadar tehsil of Ayodhya. It is unconnected to the plot of land where the Babri mosque stood for five centuries before it was demolished by a Hindutva mob on December 6, 1992.

In a press conference on June 13, Samajwadi Party leader Tej Narayan ‘Pawan’ Pandey questioned how the value of the plot purchased by the trust increased ten times within a span of just 10 minutes.

“On March 18, 2021, the registration of land purchased … showed its value at Rs 2 crore. But 10 minutes later, an agreement of Rs 18 crore was made between the Ram Temple Trust and the seller,” he said. Pointing a finger at the general secretary of the trust, Champat Rai, Pandey said the deal should be probed.

Speaking to The Wire, he went on to allege that devotees had been “duped” in Ram’s name by the Trust.,

Rai of the Vishwa Hindu Parishad was one of a number of Sangh parivar politicians indicted and prosecuted by the Central Bureau of Investigation for their role in the demolition of the mosque. Last year, he and everyone else accused of the crime were acquitted by a CBI special court judge.

Speaking to the media, Aam Aadmi Party leader Sanjay Singh said that the land’s value was estimated at Rs 2 crore during its registration but an additional payment of Rs 16.5 crore was made to the seller just minutes later. “Land worth Rs 2 crore was purchased at Rs 18.5 crore by the Shri Ram Janmabhoomi Teerth Kshetra Trust in Ayodhya,” he alleged.

The first sale deed shows the purchase of the property by Ravi Mohan Tiwari and Sultan Ansari from Kusum Pathak and Harish Pathak for Rs. 2 crore while the second one shows Tiwari and Ansari selling the same land to the trust for Rs. 18.50 crores. All of them are property dealers based in Ayodhya, according to Pandey. 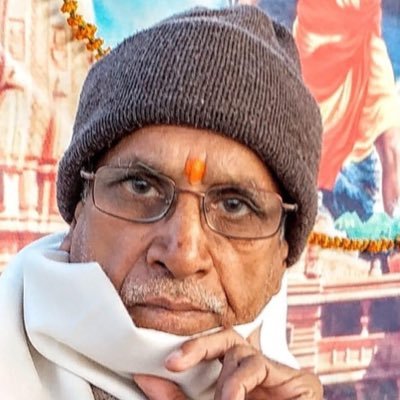 Champat Rai of the Vishwa Hindu Parishad, who is general secretary of the Ram Temple Trust. Photo: Twitter.

In a statement released late on Sunday night, Champat Rai said that the value of land in Ayodhya has shot up ever since the Supreme Court’s 2019 verdict. As for the land in question, Rai said that the dealers from whom the Trust bought the plot had themselves struck a contract years ago to purchase the property from the original owners at a lower price,

The trust had, till March 31, received Rs. 3,200 crores in a fund collection drive for the purpose of constructing Ram temple, according to reports.

Pointing to the manner in which funds have been raised, Sanjay Singh said, “The act of the members of the Trust has dealt a big blow to the faith of millions of Ram bhakts who have given donations for [the] construction of the grand Ram temple at Ayodhya. The land deal papers clearly show how the Trust members misused their powers and purchased land paying a hefty amount. ”

Further, he said, “Not just that. People gave a lot of money in the name of Ram temple. They have been betrayed, their faiths have been disrespected. All the actions of the trust must now be closely scrutinised.”

Witnesses in both the documents are the same people, said Pandey. Anil Kumar Mishra, a member of the trust, is one of the witnesses to both the agreements. Rishikesh Upadhyay, the mayor of Ayodhya, is also a common witness.

Reacting to Rai’s explanation, Singh tweeted sarcastically, “The Trust has said the land has become expennsive… Can the value of land increase by Rs 5.50 lakh every second?”

Soon after Singh and Pandey made their allegations, Champat Rai, said that people have been making allegations against the Sangh for the last 100 years.

“We were also accused of killing Mahatma Gandhi. We don’t care about such allegations. We will study them and then reply,” he told ANI.

By late night, his statement cited Ayodhya’s rising land prices for the transaction and blamed people motivated by “political hatred” for “misleading the people”.