Does the Modi Government Really Want to Promote Urdu?

The NCPUL is roping in prominent Bollywood figures for the promotion of Urdu, but the decision is being widely criticised on social media. 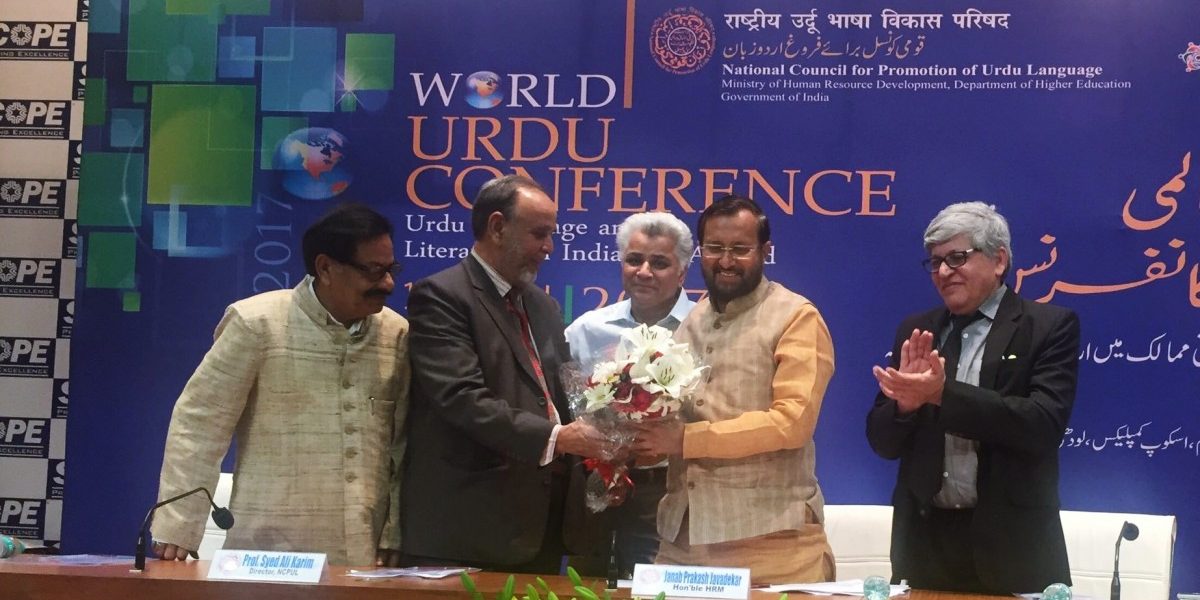 Human resource development minister Prakash Javedkar at the 2017 World Urdu Conference organised by the National Council for the Promotion of Urdu Language.

The National Council for Promotion of Urdu Language is an autonomous body under the Ministry of Human Resource Development (MHRD) dedicated to the promotion and development of Urdu.

Recently, it was reported that the NCPUL is roping in prominent Bollywood figures for the promotion of Urdu along the lines of private organisations, particularly Rekhta, which organises events like Jashn-e-Rekhta and makes it a point to invite both big and small figures from the worlds of cinema and literature for the promotion of the language.

The news spread like wildfire over social media and even those who had never heard of the NCPUL seemed dismayed over the decision. The news further stated that the council is in touch with Shahrukh Khan, Salman Khan and Katrina Kaif for fulfilling its objective, and that it was looking forward to their endorsement of Urdu.

Subsequently, the intention of the government was viciously questioned and criticised, and Katrina Kaif’s poor Hindi speaking skills were made a subject of ridicule. The other two celebrities were targeted as well.

The NCPUL, however, has clearly stated its intention about the kind of promotional work it wants the stars to perform. The council says that it wants the Bollywood stars to speak a few lines in Urdu, the videos of which will be used in its events.

The council has accepted that there is increased competition because of private players like the Rekhta Foundation. It said that the step is being taken in order to attract the younger generation towards Urdu.

Though celebrities and literary events were a clever distraction from the real issue, it actually helped the NCPUL get decent media coverage.

The NCPUL cannot garner enough media attention for its World Urdu Conference despite prominent ghazal singer Talat Aziz endorsing it, except in the Urdu media, which otherwise usually highlights controversies surrounding the council.

Due to a dearth of audience, the NCPUL began a tradition of inviting research scholars (nearly 80 students) from universities across the country. Yet, its events lacked the same fervour as Rekhta.

Therefore, without giving it much thought, the NCPUL tried to do what private organisations can do openly on a larger scale. As such, there is no point in criticising the NCPUL for its small effort to promote Urdu through Bollywood stars.

The question here is not who is going to promote Urdu and whether they know the language or not. The question is: what perspective does the NCPUL have regarding the development of the language?

As an autonomous body under the MHRD, the responsibility and objective of the NCPUL is to bridge the gap between Urdu and science and technology, to advise the government of India on its development, to support the teaching of Urdu in educational institutes, to run courses in Urdu, to prepare Urdu course books and use modern tools and technology to promote the Urdu language.

The government of India has so far provided a reasonable budget towards the fulfilment of these objectives. According to a report, the Modi government has, in fact, opened a treasure trove for it. It is claimed that the government had allocated a budget of Rs 332.76 crore for the NCPUL during 2014-19, while under the UPA-2 government it was merely Rs 176.48.

The biggest allegation against the NCPUL in recent times has been that it has not played a significant role in the growth of Urdu despite being supplied with a sizeable budget.

Undoubtedly, it continues to actively work for the promotion of Urdu literature.

But even writers are not happy as they allege that the NCPUL has spent money on publishing and promoting the sale of all sorts of absurd and licentious books in the name of literature.

Apart from literature, no substantive book promoting the Urdu language has been published in the last few years. Writers argue that the council does not have a vision regarding the upliftment of the language, which is why it is content with conducting seminars on stale topics and holding the time-worn World Urdu Conference.

Some also allege that the NCPUL has little interest in reprinting old and rare books. Amid such allegations, the need for a fresh discussion on the objectives of the NCPUL has also been felt.

Recently, former IAS officer and renowned Urdu poet, Pratipal Singh Betab, alleged that the NCPUL has been made a purely Muslim institution for which he holds the RSS and the BJP’s animosity towards Urdu responsible.

His allegations are not altogether baseless, considering that the council currently has a negligible number of non-Muslim members. Apart from this, it is also true that the NCPUL is unable to do anything remarkable for the progress of literature.

The literary quality of the NCPUL magazines is mediocre, while modern media only finds mention in minor columns. Another allegation against the NCPUL is that it pays only a select few writers and university members, who benefit from it in different ways. On the whole, the only way it benefits the public is by issuing certificates for some courses.

So what if celebrities are being used to promote Urdu?

As far as Salman Khan is concerned, the Modi government’s love for him has been evident ever since his father Salim Khan launched Modi’s official Urdu website on April 16, 2014 – a fact mentioned on the website. The website also states that the prime minister offered special thanks to Salim Khan for it.

Salim Khan had then said, “I like Urdu as well. I was the one who advised Modiji to launch the website and it is not the BJP’s strategy to attract Muslim voters.”

If Modi can launch an Urdu website for Muslims on the advice of Salim Khan tagging Urdu to Muslims, what is the big deal in inviting Salman Khan to speak a few words on the NCPUL platform if there is no ‘BJP strategy’ to attract Muslim voters?

After all, Modi’s love for Urdu goes back a long time, which is apparent from the Urdu Twitter handles of the former Gujarat chief minister and current prime minister. Whether they are official handles or not can be questioned, but Modi follows them.

Speaking of Shahrukh Khan, it is no mere coincidence that immediately after Zafar Sareshwala, a Modi favourite turned rebel, was appointed the chancellor of Maulana Azad National Urdu University, Shahrukh was bestowed with a doctorate degree.

Shahrukh had then said, “My father spoke Urdu and Persian beautifully. And whatever I have learned about the art of conversation, it is because of him.” He added that he would continue serving Urdu and other languages through his work.

It does not matter whether Shahrukh knows Urdu or not, because not only does he have a degree from a government university but has also expressed his intention to work for Indian languages.

It is also not a coincidence that recently, the prime minister had roped in several Bollywood stars and other celebrities for an awareness campaign for voters on Twitter. On similar lines, this government body is reaching out to celebrities for the promotion of Urdu, a step which might indirectly sends across a significant message to voters.

I do not contest that this step is politically motivated, but it does not justify making fun of those few who are working towards the promotion of Indian languages in one way or another.

This is also not the first time when the council has invited celebrities for promotion. Once, celebrities like Farooq Sheikh and Muzaffar Ali were invited to participate in programmes but their presence did little to help the NCPUL bring the masses any closer to Urdu.

Thus, whether this step by the NCPUL is political or not, there is nothing wrong with Bollywood stars participating in it. It is ironic, that in spite of having a major body for the cause of Urdu, the government neither has any desire nor a policy for it.

Instead of competing with anyone, the council will have to create its own vision.

Only then can ‘vikas‘ or progress have truly been attained. Moreover, the government can also probably send across this message now that Urdu is not the language of terrorists. There is also no need for a politics of Muslim appeasement in the name of Urdu – much like what the Congress does.

This article was originally published in Hindi and was translated by Naushin Rehman.