Does Modi's Attack on JD(S) Signal a Potential Shift by Deve Gowda's Party?

With four days left for the poll campaign to end, the PM is set to address 21 rallies. Will his last-ditch efforts to woo 3-4% anti-incumbency votes by projecting JD(S) as having struck a deal with Congress, work? 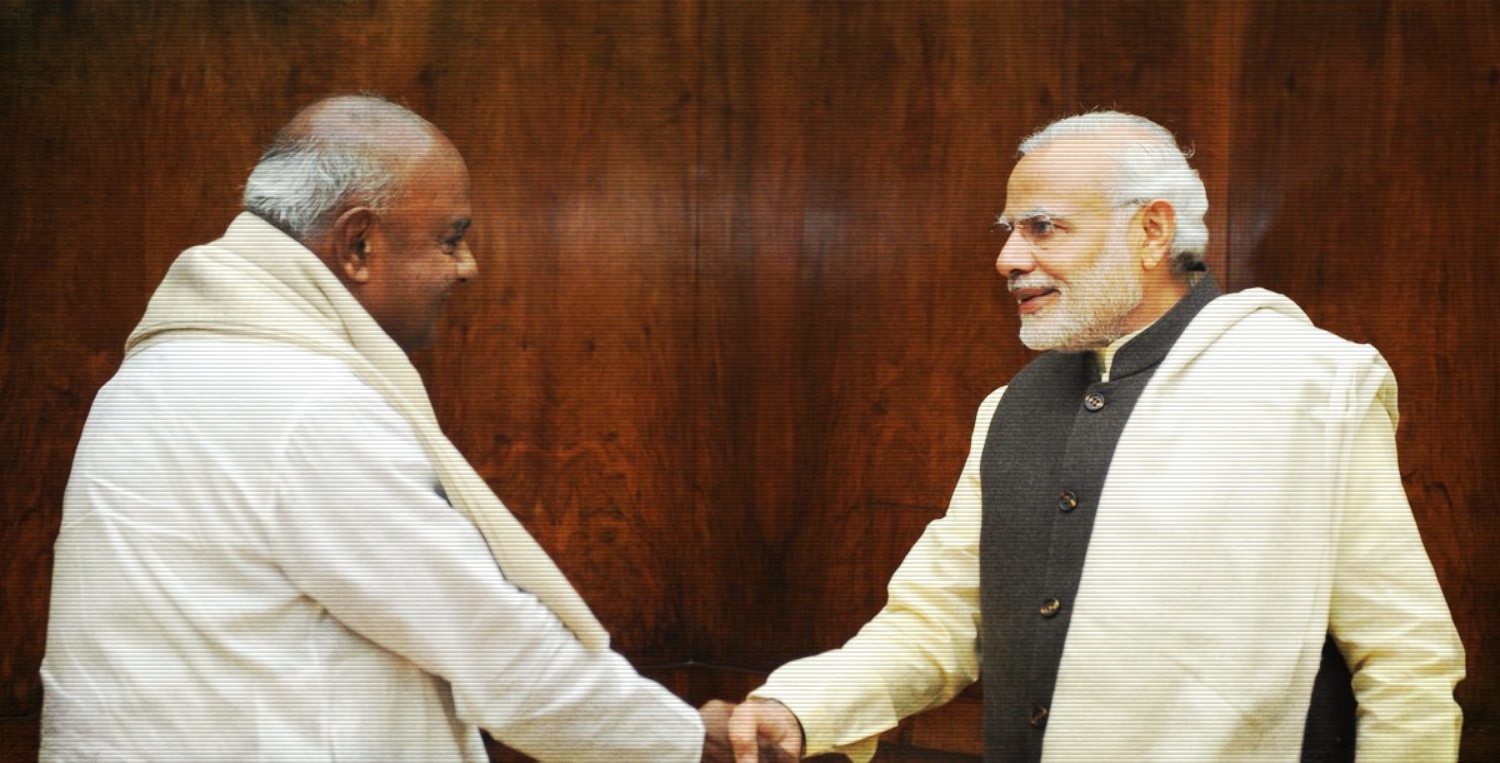 Prime Minister Narendra Modi has decided to address 21 election rallies in Karnataka instead of 15 planned originally because he hopes to swing fence-sitting voters in BJP’s favour with his last-mile campaign blitzkrieg. But this won’t be such an easy task for Modi in this rather low-key assembly election that has not seen any dramatic, mood-turning issues. In fact, there may just not be enough fence-sitters if the voters have already decided who to vote for, as is normally the case in elections without major issues to the fore. So one really doesn’t know as yet what the real impact of Modi’s 21 election rallies will have on Karnataka voters.

Still, Modi’s personal campaign strategy seems rather puzzling. It is puzzling because Modi is now attacking H.D Deve Gowda’s party – the Janata Dal (Secular) – as having struck a secret understanding with the Congress when it is widely recognised that the Bharatiya Janata Party and JD(S) are more likely to form a government together in the event of a hung house which most poll surveys predict.

In a large public rally outside Bangalore in Tumkuru, Prime Minster Modi began by praising Deve Gowda as one of the “most respected” leaders from Karnataka but proceeded to urge voters not to waste their vote on his party, the JD(S), “which was coming a poor third”. Modi further attacked JD(S) by suggesting it had a secret understanding with the Congress in many constituencies and specifically named some of them. The Prime Minister publicly sharing the specifics of alleged deals between the JD(S) and Congress seemed a bit out of the ordinary. All this is happening when many believe the BJP already has a secret pre-poll understanding with JD(S) on post-poll government formation. Then why is Modi attacking the JD(S)?

What is Modi trying to achieve? The BJP possibly fears that the JD(S), as an important opposition party, might benefit more from the anti-incumbency sentiment in the state. So it makes sense to project the JD(S) as close to the Congress, which is the ruling party in Karnataka.

It is possible that midway through the election campaign, the BJP was upset with Deve Gowda’s statement that he would “disown his son (H. D Kumaraswamy) if he tied up with the BJP? It was a big mistake to tie up with the BJP last time”. It is this statement that seems to have triggered a retaliation from Prime Minister Modi. But does this mean that Deve Gowda is wavering from the promises he might have made to the BJP in the first place?

PM Modi knows that incumbent chief minister and Congress leader Siddaramaiah has done well to systematically stitch together the Scheduled Castes/Scheduled Tribes, who constitute 24% of voters in the state.

The fact is that Deve Gowda and his son Kumaraswamy will hold all the cards in the event of a hung house. They will have the choice to either go with the BJP or Congress. Deve Gowda is a very shrewd politician. If the BJP doesn’t do particularly well in terms of the number of seats it bags, Gowda will assess his potential partner (BJP or Congress) based on their prospect in the Lok Sabha elections in 2019. Indeed, if Gowda sees that Modi’s last-mile efforts have not paid any dividends to the BJP, he may start bargaining with the Congress in order to stay in the opposition grouping nationally in 2019.

So, what Modi is trying very hard to do with his last-mile campaign speeches is to get that extra 3 to 4 percentage points by urging voters to give BJP a decisive victory. It is in this context that he is urging Deve Gowda’s supporters to dump JD(s) and vote for the BJP. Prime Minister Modi is making a big pitch for Dalit and backward votes saying the BJP had made a Dalit the President of India, and a backward, the Prime Minister. He is basically urging the backward caste and Dalit supporters of JD(S) to shift to BJP. Modi knows that incumbent chief minister and Congress leader Siddaramaiah has done well to systematically stitch together the Scheduled Castes/Scheduled Tribes, who constitute 24% of voters in the state. The main support base of JD(S) comes from the Vokkaliga community who constitute 12% of the vote. JD(S) also gets a fair share of SC/ST votes. And BJP knows the importance of getting a good chunk of SC/ST votes to grab power on its own. Therefore, Modi’s public plea not to waste votes on JD(S).

So Modi’s success in the final leg of the campaign depends on getting the extra 3% to 4% vote share to swing the elections decisively in the BJP’s favour. Will he manage this purely based on his personal charisma, is the big question. Many argue that Karnataka is not Uttar Pradesh. The Southern state works on a different cultural idiom which Modi may not have grasped yet. Also, at the state-level, no leader has the stature that Siddaramaiah has, as of today. That is what is giving Congress an edge over the others, as reflected in most pre-poll surveys.