"If the government gives us some land where we can move and build shanties, we will leave. But otherwise, we will continue to live here." 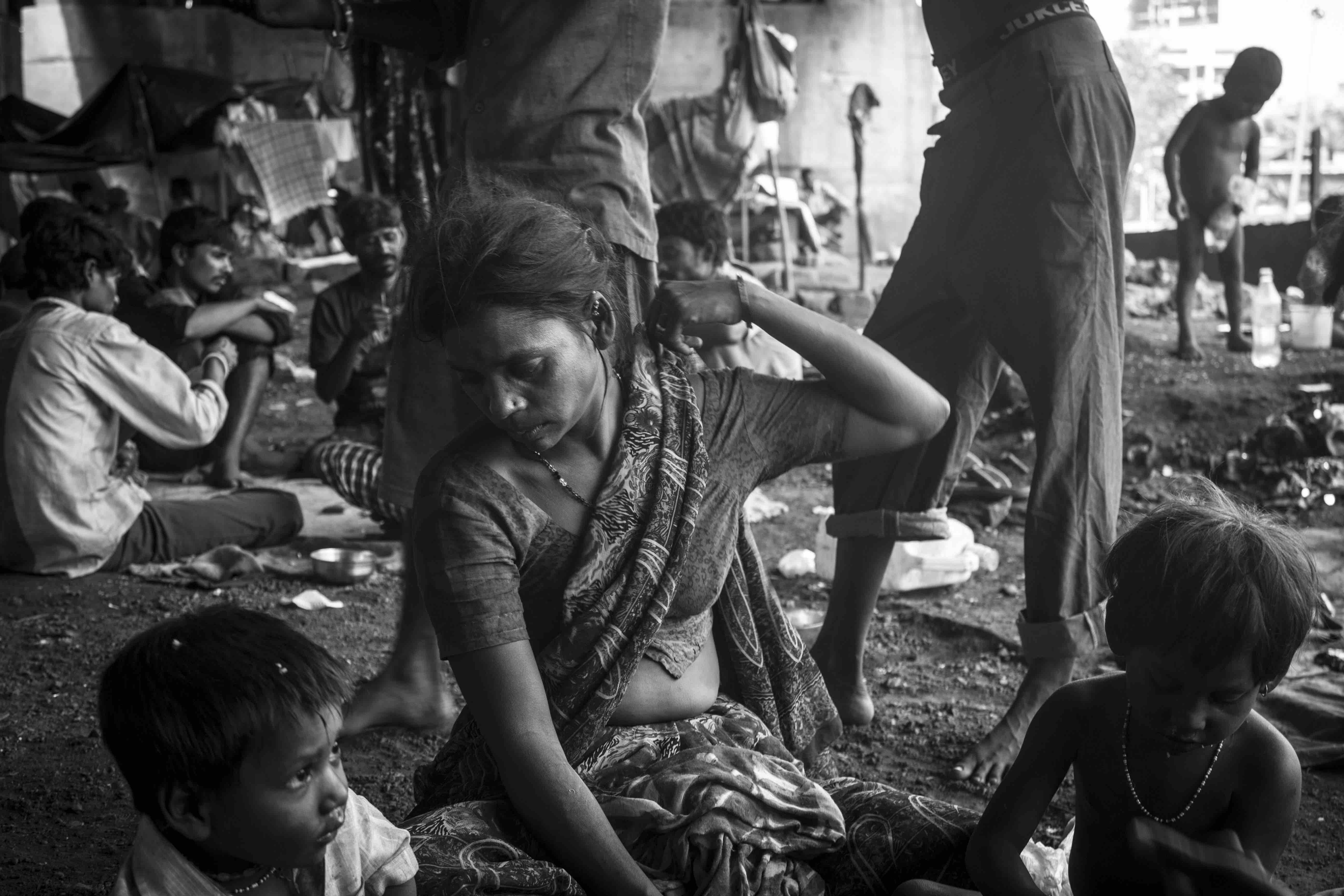 Mumbai: At Chembur’s Amar Mahal flyover, construction crews are working away at breaking it down part by part to enable its reconstruction. The demolition work has been ongoing since June, after damage to the flyover’s joints was detected. But 50 metres away from the section currently being demolished is a small community of 14 families who call the area under the adjoining section their home. With the sound of hammering and drilling as a background score, women and men cook over the acrid fumes of wood fire, barefoot children play with each other and families sleep on tattered mats. In around two months, the construction activities will reach this section, requiring it to be evacuated. But this community is refusing to move.

The settlement under the flyover comprises members of the Phase Pardhi community, which was listed as a criminal tribe by the British through their 1871 Criminal Tribes Act. Under this Act, all members of the listed tribes were branded as ‘criminals’; the rationale given for this was that crime was a hereditary community profession among them. Though they were ‘denotified’ by the government after independence, members of the Phase Pardhi community, and other ‘denotified tribes’, continue to be subjected to much stigma and discrimination. Young men from such communities are still picked up and harassed by the police as suspects for crimes without any proof.

While the community under the flyover say that they are originally from Marathwada, they have no homes to return to and no land of their own. Caste has followed them to the city, as evidenced by their threadbare existence. However, they find that working as daily-wage labourers by cleaning drains and working at construction sites for the Public Works Department (PWD), as and when such work becomes available, selling items at traffic signals and begging offers them a better livelihood than working as landless labourers in the village. Most of these families have been living under the Amar Mahal flyover for 15-20 years. They have no shanties, no tarpaulin tents; the flyover is the only roof above their heads. It is listed as their formal address in their ration cards and Aadhar cards. Yet, they have no legal claim to state that this space is indeed their home. 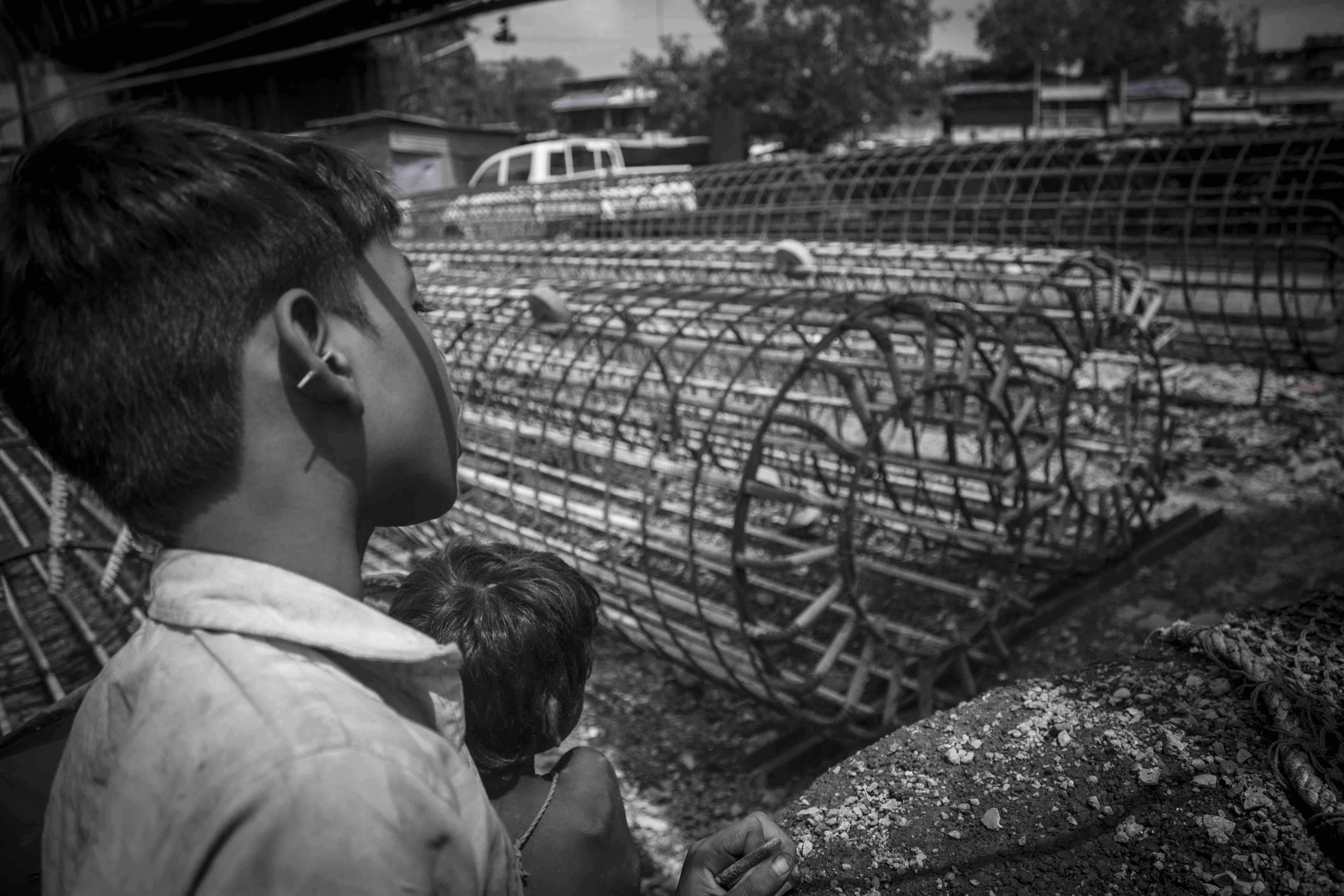 Their ‘illegal’ status means that with the ongoing construction, they have not received any written notice to vacate the area. Instead, authority has been communicated to them through improvised means. There have been polite requests and advice to leave by the PWD, the Mumbai Metropolitan Region Development Authority and the police. But residents also claim that policemen burnt all their possessions two months ago, forcing them to move from the section of the flyover they were occupying at the time to where they are currently living. However, members of the community are resolute about not being bullied out of their home. Their contention is simple: “We have nowhere to go from here. If the government gives us some land where we can move and build shanties, we will leave. But otherwise, we will continue to live here. If the flyover collapses, let it fall on our heads,” says Bhama Arun, who has been under the flyover for the last 20 years.

The demolition and reconstruction has been ongoing for the last two months. As the building process gradually approaches the section of the flyover they are living under, the residents are aware of the immediate threat of being forced out. They have moved their possessions under the nearby flyover parallel to Amar Mahal to protect them. Some of the residents have also moved there, but care has been taken to ensure that enough people are living under Amar Mahal flyover that it continues to be a settlement. They know that if they all move out, they will lose all claim, even informal, to the space.

The ‘common sense’ of the more privileged might ask why the insistence to hold on to their claim to this particular space. Several residents explained why being asked to live on the streets or under another flyover will not do. Before settling here, many of the families have lived on the streets in other parts of the city like Mahim and Garodia until they were forced out. In their extreme socio-economic marginalisation, this is a space that they have marked as their own. 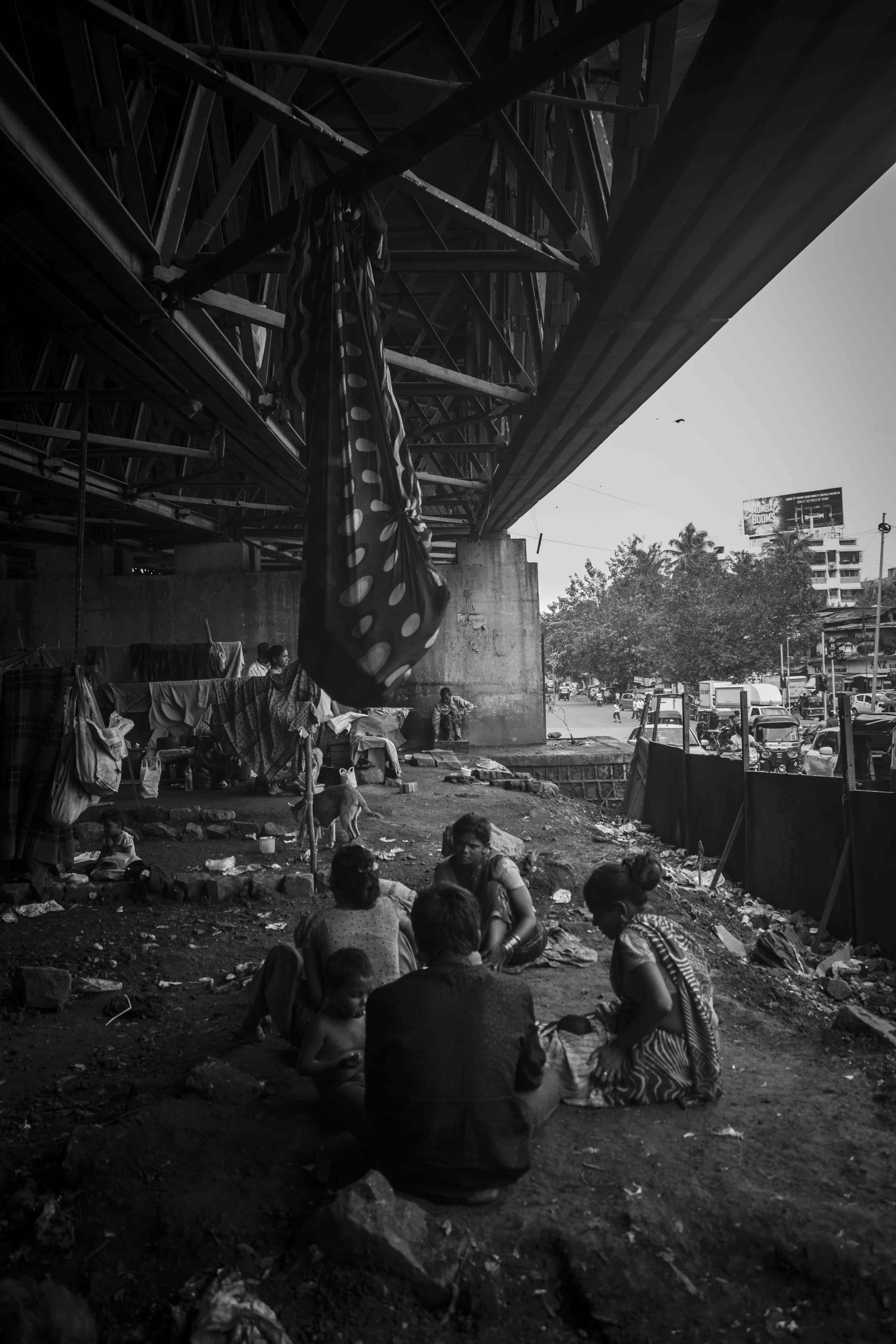 Members of the community living under the Amar Mahal flyover. Credit: Prthvir Solanki

According to Pallavi Thakare, a member of Koshish, a field action programme of Tata Institute of Social Sciences that focuses on destitution and unhoused people in Mumbai, there is a sense of security that this space lends them in their highly unstable and vulnerable lives. “They live together with a sense of community here and have been doing so for many years. There is a market to the right and constant activity on both sides of the flyover. This comforts them and makes them feel safe here,” she told The Wire.

Neither are streets and flyovers free spaces that they can easily move from here to there, contrary to what it may seem like. “Settling somewhere else takes time and it isn’t easy. And many places are already occupied by others who claim it. For instance, there is a slum-like settlement under the next flyover, which means that first, it is someone else’s turf and they’re not welcome there. Secondly, they feel afraid that someone from there might harm their children, especially daughters,” says Thakare.

By refusing to move, they are also articulating their protest against the failure of the state to provide them with a roof over their heads. Under current circumstances, the flyover is their best housing option. They insist that the only circumstance under which they will move is if the state provides them with land on which they can build shanties for themselves.

While many residents argued for a positive relationship with their space under the flyover, Sachin Shinde, another resident, articulates a different perspective. “This is a hopeless place, it has nothing and no good will ever come from living here. People only want to continue living here because it is a good begging spot. I will resist moving from here, not because I care about this place, but so that the government will be forced to give us some land to build houses on so I can move my family away.”

He further says that he is resolute about not being pushed to live under some other flyover or street: “If we move to the next flyover, who knows how long it will be before they force us out of there as well. We are in this section of the flyover also because we were pushed out of our earlier spot. How long are we supposed to keep running around? The only solution is us getting space to build shanties.”

That the city’s development is geared towards projects for the well-to-do class of private car owners as opposed to either housing the marginalised or public transport is well established. Maharashtra state budget’s fund allocation for housing for the fiscal year 2017-18 has experienced a 14% cut against the previously-allocated funds, while only 9% of the previously-allocated funds had been used. This is at the heels of the completion of multi-crore road projects like the Eastern Expressway and the Worli Sea Link, while other massive projects like the Coastal Road from Marine Lines to Kandivali and the Goregaon-Mulund Link Road are in the pipeline. New flyovers are constructed every year.