A Strong Democracy Is Built on Questioning State Policy

Defence policy in India should not be seen as the final 'good' that nobody can disagree with. 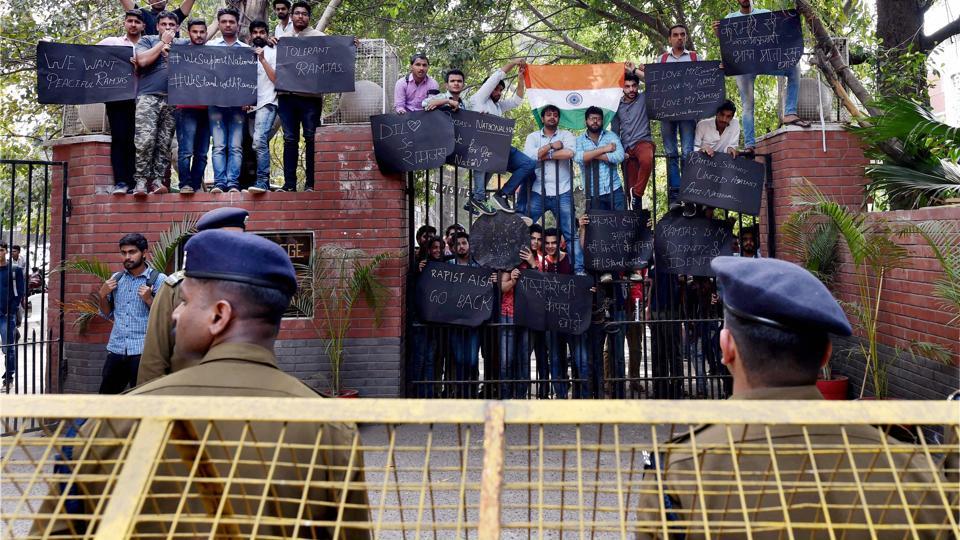 Students of Ramjas College during their protest march against ABVP violence at North Campus in New Delhi on February 28. Credit: PTI

The periodic campaigns by sections of the regime and their supporters against peaceniks and those questioning state policy on matters of the government’s neighbourhood policy and internal security, is inconsistent with the global history of anti-war movements and the articulation of related sentiments. The dispute in Delhi University, triggered by the Ramjas College English department’s decision to invite controversial student activist Umar Khalid to speak at a seminar titled ‘Unveiling the State: Regions in Conflict’, took a contentious turn when disagreement poured out on streets.

Belligerent supporters of the Akhil Bharatiya Vidyarthi Parishad (ABVP) were particularly incensed with Gurmehar Kaur, who describes herself as peace activist. The attacks against Kaur, which reached alarming levels, was partially based on the idea that being a peace supporter was incompatible with her social status: a martyr’s daughter (or any family member) should not be a critic of state policy and if they commit such a ‘misdeed’, they are anti-national. One may disagree with the sweeping generalisation of the young student’s placard campaign, but by no stroke of imagination can one contend that she or Khalid, filmmaker Sanjay Kak and academic Bimol Okoijam (who were also to speak at the Ramjas seminar on February 21) are anti-national.

In fact, the ABVP’s campaign to vilify everyone not in agreement with programmes and policies of the organisation and its affiliates provides the answer to the question that Kak raised in the title of his presentation: ‘Resisting What We are Told is Inevitable: Is there Room for Hope?’ Whether social reality provides space for optimism is for activists to decide. But wearing an analyst’s hat, one can just point to the flawed conceptions of democracy – deemed the religion of the country, with the constitution termed as the only holy book by the prime minister – that are now becoming normal.

Almost all serious social discourse is led by muscular social media ‘activists’, who use words to bully others and not to reason with adversaries. But they must look at how historically democratic nations allowed dissent and debate on state policy. Those who have disallowed such privileges or denied rights to people have either perished or are treated as ‘rogue’ nations, with whom other nations deal with only out of necessity and not respect.

One of the principal charges against Kaur and her ilk is that in the India-Pakistan framework, “war must remain an available option” and should not be presented as a tragedy that befalls the people of the two countries. Nuanced opinions, such as not everyone in Pakistan supports its state policy or agrees with terrorists who operate freely in connivance with the deep-state, are summarily dismissed by ultra-nationalists who have turned unapologetic since events at JNU last year.

For several decades after independence, foreign and defence policies were holy cows that were never criticised in the media or on public fora. For almost two decades, as the Indian state acquired maturity, this trend was reversed. In debates on matters of national security and foreign policy after the onset of limited Indian glasnost, valuable inputs were provided by several members of the present regime in the years they were in government previously and during the time they were in opposition.

The definition of nationalism is being narrowed with sectarian consequences; the liberty to advocate for peace in India must match the rest of the democratic world. Unless of course there is consensus among all stakeholders that we are in a state of war! However, history provides several instances of criticism being permitted by governments even when the nation has been at war.

Let us recall Robert Southey’s poem ‘After Blenheim;, written more than 200 years ago in 1796. At a time when Britain was at war, this simple literary landmark was among the first anti-war literature and depicted a conversation between an old man and his grandchildren regarding the Blenheim war (fought in the early years of the 18th century between French-Bavarian forces and a coalition of European nations led by Austria). Yet Britain’s government of the time didn’t depict Southey’s poem as treasonous! This despite memorable lines underscoring purposelessness of war:

“It was the English,” Kaspar cried,
“Who put the French to rout;
But what they fought each other for,
I could not well make out;
But everybody said,” quoth he,
“That ’twas a famous victory.

“With fire and sword the country round
Was wasted far and wide,
And many a childing mother then,
And new-born baby died;
But things like that, you know, must be
At every famous victory.

“They say it was a shocking sight
After the field was won;
For many thousand bodies here
Lay rotting in the sun;
But things like that, you know, must be
After a famous victory.

“And everybody praised the Duke
Who this great fight did win.”
“But what good came of it at last?”
Quoth little Peterkin.
“Why that I cannot tell,” said he,
“But ’twas a famous victory.”

Almost every major war in modern global history has been accompanied by evocative anti-war associations who lobbied to raise societal awareness regarding the futility of war, participation for which came from diverse fields – academics, artists, writers, scientists and businesspersons. In the US, anti-war sentiment was not insignificant even in the pre-Civil War era. In the British Empire, there was a Stop the War Committee against the Second Boer War. Artists got together to launch a pan-European avant garde cultural movement – Dadaism against not just war but against many other features of the change underway at that time. The Second World War generated its literature of disagreement and not all communist-led organisations supported the Hitler-Stalin pact.

War veterans have not been derided in any country, even when they have warned against the irreparable damages of future wars. In the post-war period, perhaps the most stunning uprising against war policies was the American opposition to the Vietnam War in the 1960s and early 1970s. Not all who don’t support ‘beef nationalism’ in India now are communists and not all families of martyrs want revenge in cinematic style. Similarly, anti-Vietnam war activists included veterans, housewives and even mothers who lost their sons in the battles. Among the thousands of war veterans who protested against American state policy was a certain gentleman named John Kerry. No one ever accused him of suspect patriotism when he rose to hold high offices and even aspired to be president of the US.

Francis Copolla’s Apocalypse Now – a biting film on American misadventure in Vietnam, based on Joseph Conrad’s Heart of Darkness – features in several lists on the finest films ever made. Despite the displeasure of the defence establishment, the film had a successful run. Even in recent times, there has been no end to criticism of the Afghan War, Iraq War and against possible American strike against Iran a few years ago. The Labour Party in the UK is yet to recover from the damage caused due to the lies the Blair government told regarding Iraq possessing weapons of mass destruction.

There is no necessity for a confident nation to compel people to accept state policy. Criticism of the state is not the same as criticising or working against interests of the nation. India’s state policy will truly come of age when it does not prevent filmmakers from making full-length feature films portraying intelligence failure leading to the Kargil conflict or how those responsible for the Bhopal gas disaster have gone scot-free.

Creative and scholastic interpretation of war will also stress on the brutal. Recall the words that Ved Vyasa put in the mouth of Sanjaya, the charioteer: “In the blink of an eye those two armies had rushed together in hopeless confusion. While I watched fearfully under the protection of Vyasa, the derangement of war was all around me: dust that dimmed the sunlight, the noise of crashing chariots and splintering wood, elephants and horses calling, bones and metal breaking, and the shouts and cries of warriors…”

Nilanjan Mukhopadhyay is a Delhi-based writer and journalist. He authored Narendra Modi: The Man, The Times and Sikhs: The Untold Agony of 1984. He tweets at @NilanjanUdwin.