'This incident is being discussed all over the world and it will look strange if we don't discuss it here when the session is on.' 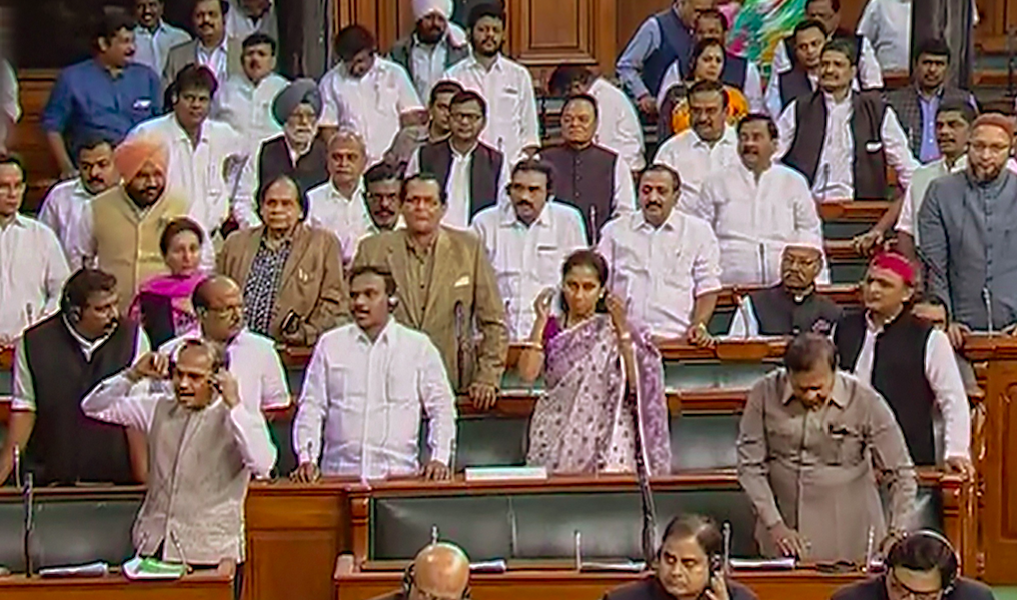 Opposition members protest in the Lok Sabha during the Budget Session of Parliament, in New Delhi, Tuesday, March 3, 2020. Photo: PTI

New Delhi: The commotion in parliament continued on Tuesday, as members of the opposition and the ruling Bharatiya Janata Party came almost on the verge of an altercation immediately after the Lok Sabha Speaker Om Birla announced that a discussion on the Delhi riots will only be allowed after Holi.

Opposition members have been demanding the resignation of Union home minister Amit Shah for failing to stop the communal violence that engulfed north-east Delhi for more than three days. Many also allege that Shah may have played an active role through his aggressive election speeches in fomenting the riots.

The union government officials, including the home minister, have until now refused to budge to engage with the opposition.

The Speaker’s decision to push the discussion on riots to March 11 enraged the opposition members. They threw leaflets and paper balls at the chair, while many others occupied the well of the house.

Despite repeated requests by the Speaker, members of both the opposition and treasury benches in the Lok Sabha crossed over to the other side, trying to shove each other. The offenders, Birla said, will be suspended for the entire session, even as he adjourned the House for the day.

“We are working for the benefit of the country. Keeping in mind the situation in the country, celebrate Holi festival in peace and harmony…Government is ready to discuss the issue after Holi on March 11,” he said.

Earlier in the day, Parliamentary Affairs Minister Pralhad Joshi said the government was ready for a debate on the issue during Zero Hour but the opposition sought an immediate discussion.

As soon as the House met for the day at 11 am, members from the Congress, DMK and other opposition parties were on their feet, demanding a discussion on Delhi violence.

The Speaker told agitating members that issues can be raised during the Zero Hour at noon and that he wanted to begin the Question Hour. However, immediately after the House met at 2 pm, similar commotion continued, leading to the Lower House’s adjournment.

Rajya Sabha discussion a non-starter too

The Upper House was adjourned for the day too with hardly any legislative business transacted for the second day.

As the Upper House reassembled at 3 pm after two adjournments earlier in the day, Leader of Opposition in Rajya Sabha Ghulam Nabi Azad said it would appear strange if the parliament did not discuss the incidents of violence in Delhi when the whole world was talking about it.

Referring to the incidents of violence which has claimed at least 44 lives so far, Azad said irrespective of religion, 90% of those who lost their lives belonged to the age group of 24 to 35 years, which is a huge loss to the nation.

He said the discussion should aim towards ensuring that such an incident does not recur in the country.

Appealing to the government for a discussion on the issue at the earliest, he said it will appear like a “non-event” if parliament discusses the matter after a week.

Leader of the House Thawar Chand Gehlot said the government is ready for a discussion on the issue at a timing ascertained by the Chairman (M. Venkaiah Naidu).

“Everyone has criticised the incident that has happened. This incident is being discussed all over the world and it will look strange if we don’t discuss it here when the session is on,” Azad said.

Congress leader Anand Sharma said as the leader of the house and the leader of opposition are of the same view, the discussion should be scheduled for 11 am on Wednesday.

Deputy Chairman Harivansh said the timing of the discussion could only be decided after consulting Chairman Naidu.

K. Keshava Rao (TRS) said the House should be adjourned for the day to send out a message that the issue in Delhi was of primary concern.

The House was adjourned twice earlier in the day, first in the morning till 2 pm and then again till 3 pm after opposition and treasury benches indulged in a war of words over alleged hate speech by Union Minister Anurag Thakur in the run up to Delhi Assembly polls and the violence in the national capital.

As soon as the House assembled in the afternoon, Deputy Chairman Harivansh asked the member to allow laying of reports of department-related parliamentary standing committees listed in the business.

Immediately after laying the reports, a Congress leader raised a point of order to raise the issue again as opposition was pressing for discussion on Delhi violence.

But the Deputy Chairman said, “We are ready to discuss the issue according to decision (regarding time slot) of the Chairman of Rajya Sabha.”

Before Azad could complete his remarks, the Deputy Chairman adjourned the House till 3pm.

Earlier in the morning trouble broke out when Thakur, who has been under opposition attack over his alleged hate speech during the poll campaign for the Delhi assembly polls, was called to lay listed papers pertaining to his Finance Ministry on the table.

As Thakur, the Minister of State for Finance, rose to read a one-line statement laying listed papers on the table, he was booed by opposition benches. Commerce and Industry Minister Piyush Goyal rose to defend Thakur but this only resulted in heated arguments between the two sides.

Chairman M. Venkaiah Naidu said no comments or slogans will go on record.

“We want the House to discuss this matter, exceptional circumstances, this is no small issue. Riots, violence and things that have happened… Govt says we would discuss but we leave it to the Speaker and the Speaker says post Holi. In case of natural calamity, would the government reach out after the damage is done or work on relief in advance? ‘They say post Holi, but ‘khoon ki Holi’ (Holi of blood) toh ho rahi hai.”

Union minister Ravi Shankar Prasad made the government’s reticence clear. “We favour dialogue, but will it help ease the tensions or worsen them? Talks on such sensitive issues often worsen tensions, it is a fact… We favour discussion, but national interest is above political interest,” he said.

Let the debate happen in compliance with rules & procedure of the House & if someone violates them, it must be expunged from the record. But parliamentarians cannot be prevented from speaking at all.

The opposition members stood united in their call for an immediate discussion on the riots. The Congress said the government should give up its “obduracy” to allow a debate in both Houses over the Delhi riots, saying the “silence of parliament” on the matter will be a poor reflection on the world’s largest democracy.

Congress’ senior spokesperson Anand Sharma also hit out at Prime Minister Narendra Modi over a veiled dig at his predecessor Manmohan Singh. Addressing the BJP parliamentary party meeting, Modi said attempts were being made to create a controversy around the slogan ‘Bharat Mata Ki Jai’ (Hail Mother India) in the same way objections were raised about ‘Vande Mataram’ after the freedom struggle.

At a recent event, Singh had said the slogan of ‘Bharat Mata Ki Jai’ was being misused to construct a “militant and purely emotional” idea of India that excludes millions of residents and citizens.

“Instead of being sarcastic, he (Modi) should understand that Dr Manmohan Singh is known for his humility and wisdom. Bharat Mata belongs to all those who live in this country. The slogan ‘Bharat Mata Ki Jai’ or the tricolour have to be held in high respect and not to be used for polarisation, division and violence,” he told reporters outside Parliament.