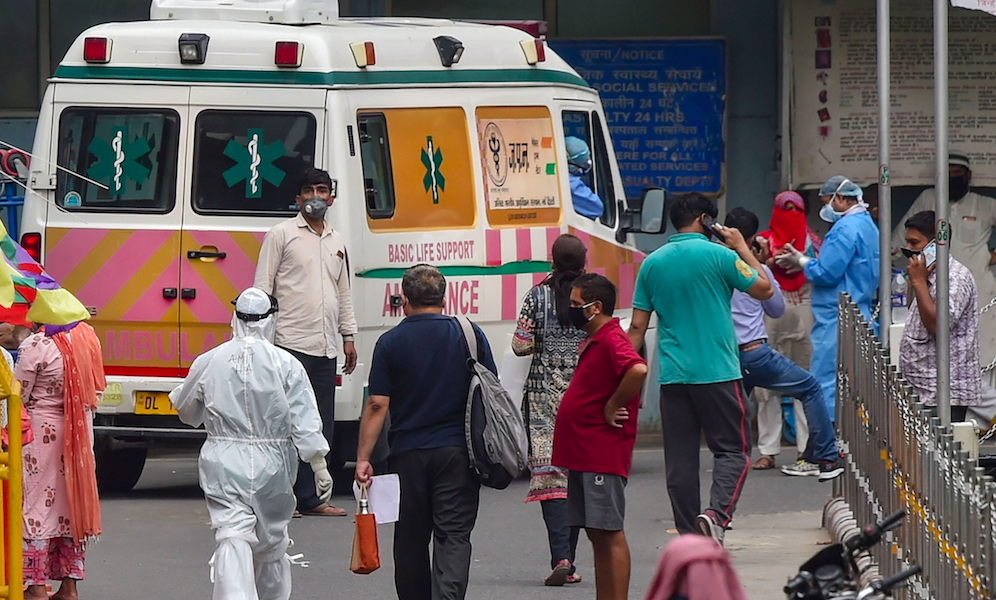 New Delhi: With Delhi witnessing a record 1,513 new patients of COVID-19 on Wednesday and with the total count crossing the 23,000 mark – with 606 deaths providing a glimpse of what lies ahead – a political blame game has started.

While the ruling Aam Aadmi Party has begun attacking the Centre for “wrong results” of testing at the Centre-run Dr. Ram Manohar Lohia Hospital, Congress and BJP leaders have begun attacking the Arvind Kejriwal government of not doing things in right earnest and for committing “fraud” on the people by launching the ‘Delhi Corona’ app.

On Thursday, Delhi health minister Satyendar Jain, while addressing a joint press conference with deputy CM Manish Sisodia, picked on the RML Hospital to highlight how the BJP-led Centre was not serious about its job.

Jain insisted that “70% of people are dying within 24 hours of reaching the RML hospital as their test reports come in 5-7 days.” Terming this “absolutely wrong”, he said, “Reports should come within 24 hours.”

He also said there was a 45% error in positive results of COVID-19 tests done at the hospital and that he has “asked the Union health minister to fix this casual approach.” On Wednesday, AAP spokesperson Raghav Chadha had also levelled similar allegations.

With the BJP and Congress attacking AAP for the rising number of COVID-19 cases and deaths in Delhi, the party appears to have decided to hit back.

In view of the rising number of cases, Jain also said that an order had been issued to reserve 20% beds in 61 private hospitals.

Sisodia said while the dedicated COVID-19 facilities “were already there,” three private hospitals have been added to the list. He said if private hospitals would face any issue in reserving 20% of the beds, then they could also be fully converted into dedicated coronavirus hospitals.

Meanwhile, both the Congress and BJP have picked on the complaints on a mismatch between availability of beds in hospitals and data being provided by the recently-launched Delhi Corona app to state that the government is not serious about it.

On Thursday, Delhi Congress president Anil Kumar tweeted that the app was not serving any purpose.

Delhi Corona App is a betrayal on the people of Delhi as this is serving no purpose to the Corona patients —Ch Anil Kumar.

A day earlier, he had stated that while the app had said 80 beds were free at the Max Hospital Patparganj, when he went there with a patient on Tuesday night, all the beds were full. “Mr. Kejriwal is telling lies and hiding the true picture,” he had then alleged.

Newly-appointed Delhi BJP president Adesh Kumar Gupta also alleged that the government was “continuously lying” about the situation and had actually “increased the pain” by lying about death, testing and availability of beds in hospitals.

All these leaders referred to a number of tweets reportedly on difficulties people faced upon reaching hospitals with COVID-19 positive people.

In one such tweet a man tagged Union health minister Harsh Vardhan while speaking about how no bed was available in Apollo or Gangaram Hospital despite the app stating so.

@drharshvardhan
Hi Sir – Need your urgent help for one covid-19 patient admission in private hospital delhi, as per app beds are showing available in apollo, Gangaram hospital but when we called him they refused to provide room. Please help🙏🏻🙏🏻🙏🏻
Download #Delhi_Corona_App pic.twitter.com/LfnBD2xRNM

Another person tagged Manish Sisodia saying that while the app showed availability of 50 beds in Max Hospital, Shalimar Bagh, when he called there to get his relative admitted, they denied having any vacant beds.

@msisodia we have a covid 19 positive patient we contacted max hospital shalimar bagh whoch as per delhi corona app has 56 beds vacant but on calling them they say no bed is vacant what to do ?

“My brother has severe COVID symptoms. We contacted Max, Apollo and Gangaram — all three said no beds. But your website shows they have beds. Please look into this – @ArvindKejriwal@AnkitLal @msisodia what’s going on?” he wrote.

Meanwhile, some newspaper reports also cited how when they checked with the hospital authorities on availability of beds, their spokespersons said there weren’t any despite the app showing a number of beds as ‘vacant’.

A Delhi government spokesperson responded to these reports by saying the app would ultimately prove to be a very “useful tool”. He said it was a “new initiative” and so there were bound to be teething issues which would be resolved soon.