On the fourth anniversary of the party's massive sweep of the Delhi assembly polls, Arvind Kejriwal hosted a massive display of opposition unity in the capital.

Opposition leaders at a rally in New Delhi. Credit: PTI/Files

New Delhi: The Aam Aadmi Party, which emerged as a political collective of civil society activists, announced its formal entry into the opposition coalition today by organising a rally against the Narendra Modi government’s “autocratic” regime.

* Former chief minister of Arunachal Pradesh, Gegong Apang, who quit the BJP on January 15 this year

AAP has long positioned itself against the political class as a whole – and projected itself as only allied with the aam aadmi‘s (common man’s) concerns. In 2015, it routed both the Congress and BJP to register an unprecedented victory in the Delhi assembly elections, and pulled off an impressive performance in the Punjab assembly polls as well.

However, ever since it began governing Delhi, it has been battling the Modi government, alleging that the BJP has been using the Lieutenant-Governor’s office to undermine its functioning and hamstring its pro-people initiatives in Delhi.

Over the past four years, it has also held other opposition parties at arm’s-length. It only recently began to show signs of a new stance, by attending combined opposition meetings and rallies – starting with expressions of solidarity with the similarly embattled Communist Party of India (Marxist) government in Kerala.

Earlier this year, Delhi chief minister Arvind Kejriwal attended the Brigade Rally hosted by West Bengal chief minister Mamata Banerjee. The party leaders indicated that this was a part of an opposition coalition in the making.

What complicated this agenda for AAP is, however, its bitter, foundational rivalry with the Congress in Delhi. After speculation that the two parties might ally in the upcoming Lok Sabha polls, they declared they would go their separate ways. In this context, the presence of Congress’s Anand Sharma at the opposition rally today signals that both the parties are ready to bury their bitterness and come together – at least politically, if not electorally – against the Modi government. 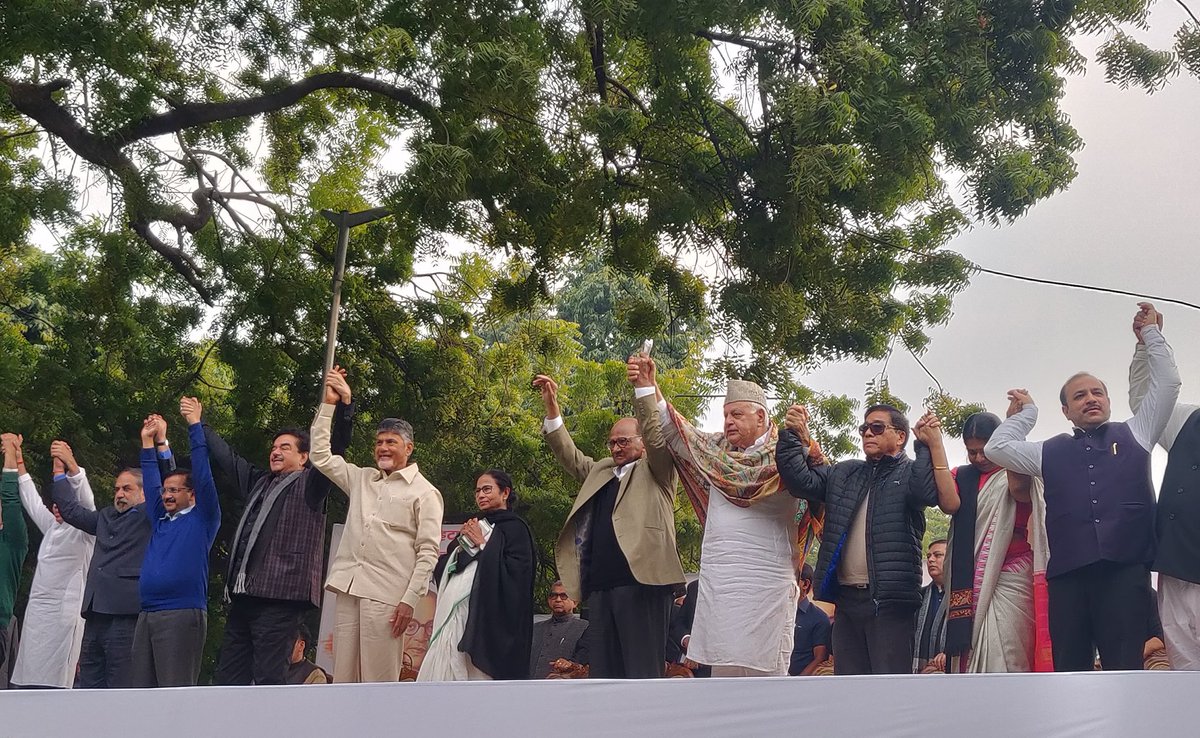 None of the leaders mooted the idea of a ‘third front’. Credit: Twitter/@AaamAadmiParty

None of the leaders mooted the idea of a ‘third front’ – opposed to both the BJP and Congress, which dominate politics at the Centre – as Telangana chief minister K. Chandrasekhar Rao had done. This indicates that denying Modi’s BJP a second term in power is their top priority right now.

In fact, Mamata Banerjee, who enthused the crowd with her speech in Hindi, declared that she has always felt that the strongest party in states should lead the opposition coalition against the BJP. “If it is AAP in Delhi, people should support it. If it is the SP-BSP in Uttar Pradesh, others parties should support it,” she said.

The central point of opposition unity, the leaders indicated, is not electoral but to fight the Modi government which, according to them, is destroying Indian democracy and the constitution.

In this context, Danish Ali of JD(S) made a case in point. “Our party is a small party. In Kerala, we are with the Left Democratic Front and contest the Congress-led United Democratic Front. But in Karnataka, we formed the government with the Congress. Why? Because we know that BJP is a threat to democracy and our constitutional system.”

Anand Sharma of the Congress contended that the opposition parties may not unite in all states but the “BJP should remember that all of them were together, from Kashmir to Kanyakumari, in this fight to save democracy.”

“Today the situation is such that even asking a question to the PM and criticising Amit Shah is considered as sedition by the government. This fight is big. We will not let the BJP divide this nation. All of us have built this country, its institutions brick-by-brick,” he said, adding that the rally was the “voice of India” as people felt betrayed by Modi.

“Asaan nahin hai  inko harana. Humein bhool jaana hai apne aap ko aur ek saath kaam karna Hoga. Is desh ko agar bachana hai, toh humein ek joot hona hoga, apne beech ke bair ko bhoolana Hoga (It won’t be easy to defeat them. We have to forget ourselves, our ambitions, and we need to work together. If we want to save the country, then we will have to stay together as a flock, we have to forget our mutual differences),” said Abdullah.

He added, “Humein apne aap ko desh ke liye kurbaan karna hai, kursi ke liye nahin (We have to sacrifice ourselves for the country, not for the prime ministerial chair).”

Most leaders spoke about the deepening agrarian crisis, rising unemployment and Modi’s autocratic functioning as the primary concerns behind the opposition’s unity. The alleged use of the CBI by the government to target political opponents, and the poor condition of small traders and businessmen as a result of demonetisation and the GST system figured prominently in speeches.

Kejriwal and other leaders highlighted the Rafale deal and alleged that Modi compromised national security and indulged in corruption.

The opposition will look to build the political narrative against the Modi-led NDA on these broad issues.