Backed by Politicians and Academics, Kejriwal Writes to Modi to Intervene in Delhi

IAS officers – who report directly to the lieutenant governor – have been on a strike in Delhi for the last three months even though Baijal denied this in his meeting with Delhi chief minister Arvind Kejriwal on Monday. 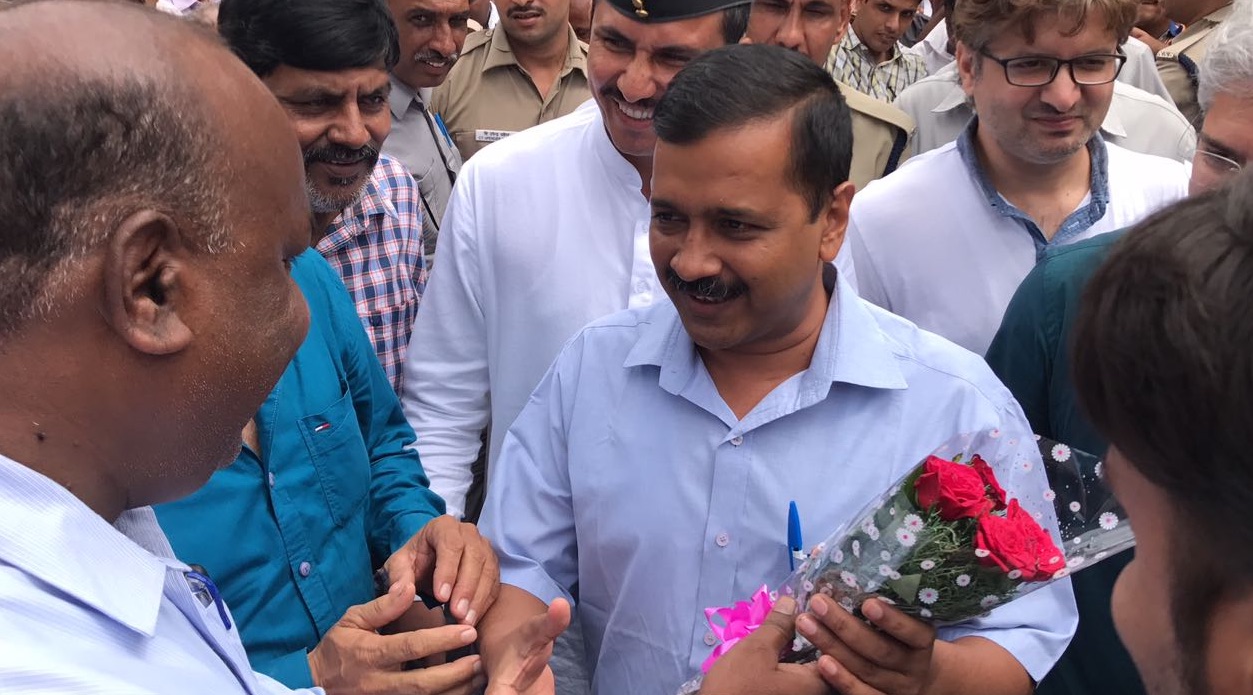 New Delhi: Buoyed by the support he has been receiving from politicians and academics alike for his protest against lieutenant governor Anil Baijal’s refusal to act on his demand for bringing the “strike” by IAS officers to an end and to punishing the striking officers, Delhi chief minister Arvind Kejriwal today shot off a letter to Prime Minister Narendra Modi seeking his intervention in the matter. Later, in afternoon, Baijal also met home minister Rajnath Singh to discuss the issue.

In his letter to Modi, Kejriwal wrote that IAS officers have been on a strike in Delhi for the last three months, and not been attending meetings. Due to this, work has got adversely impacted.

Incidentally, during his meeting with Kejriwal and his three ministers – Manish Sisodia, Gopal Rai and Satyendar Jain – on June 11, Baijal had insisted that the IAS officers were not on strike and demanded that the elected government make efforts to win over the trust and confidence of the officers and address their concerns. The mistrust between the two arms of the executive had escalated following an alleged assault on chief secretary Anshu Prakash by some AAP legislators at the chief minister’s residence in February.

While Kejriwal and the ministers insisted that he must resolve the impasse immediately, the L-G had left saying he had other appointments. “Two wrongs never make a right. Since the chief minister and ministers refused to listen to this suggestion and as L-G had pre-scheduled appointments at his residence, he had no option but to leave the office,” his office later said.

Meanwhile, Kejriwal wrote to Modi that “people have now started saying that this IAS strike is being organised by the Centre and L-G together”.

‘Work in Delhi suffering due to strike’

He also wrote that work related to desilting of drains, keeping a check on dengue and chikungunya, whitewashing of schools, construction of new mohalla clinics and polyclinics, construction of the Signature Bridge, laying of drains in unauthorised colonies and tackling pollution have all come to a halt due to the alleged strike. Kejriwal demanded that Modi act soon so that work on these projects may be resumed.

Later in the afternoon, Baijal met Rajnath Singh. The meeting came in the backdrop of AAP leaders accusing him of not having even a few minutes to spare for them despite their waiting for him for the last four days.

Petition in high court, matter to be taken up on June 18

A petition was also moved before the Delhi high court during the day in which the petitioner, Hari Nath Ram, demanded that the sit-in by the chief minister and his cabinet colleagues be declared as unconstitutional and illegal. Justice C. Hari Shankar listed the matter for hearing on June 18.

The petitioner had claimed that due to the sit-in, the chief minister’s office has come to a standstill.

Kejriwal’s unique style of protest has also been lauded by various politicians, including former senior BJP leader Yashwant Sinha, who has lent support to the cause.

Support pours in from regional parties for Kejriwal’s actions

The most recent additions to his support list include actor-turned-politician Kamal Hassan and Rashtriya Lok Dal leader Jayant Chaudhary.

Hassan, who had floated Makkal Needhi Maiam earlier this year, tweeted that what was happening in Delhi and Puducherry was not much different. “Interference in the functioning of an elected government is unacceptable in a democracy. In fact what is happening in Delhi and in TN/Pondicherry are not too different. It is frustrating for people who want a change for the better,” he tweeted.

Interference in the functioning of an elected government is unacceptable in a democracy. In fact what is happening in Delhi and in TN/Pondicherry are not too different. It is frustrating for people who want a change for the better. @ArvindKejriwal

For his part, Chaudhary had termed the situation a “governance failure”. He had tweeted his support to Kejriwal saying: “The officers appointed by the government are not even able to find five minutes in three days for the chief minister who is elected by the people? This cannot be possible without the support of the Central government.”

Earlier, CPI (M) general secretary Sitaram Yechury had also supported Kejriwal and said that the Centre was trying to “obstruct” its work. “… This is despicable. The Centre must abandon this course of confrontation right away,” he had tweeted.

BJP central government is using the office of the LG to obstruct the elected state government in Delhi to discharge its constitutional duties. This is despicable. The Centre must abandon this course of confrontation right away.

Rebel Janata Dal (United) leader Sharad Yadav, in a statement, also criticised the Centre saying, “The elected government is not being allowed to work for one reason or the other.”

He had added that it was not a “good precedent” that was being set. “It may be mentioned that this is not a failure of the state government, but the people of Delhi are being neglected due to the unnecessary tussle between the L-G and the state government,” he lamented.

Rashtriya Janata Dal leader Tejashwi Yadav had also accused the “dictatorial Centre” of making a “mockery of democracy” in Delhi and Puducherry. He tweeted that through it interference the Centre was “bloodying the contexts and aspirations of the democracy”.

West Bengal chief minister and Trinamool Congress head Mamata Banerjee, who is striving hard to bring the opposition parties together to pose a formidable challenge to BJP and its allies in the 2019 Lok Sabha polls, was amongst the first to speak out in favour of Kejriwal when she demanded that he should be given “due respect”.

. @ArvindKejriwal, CM of Delhi is sitting in a dharna in LG’s office for the last few days in the capital city of the country. Elected CM must get due respect. May I appeal to the Govt of India and @LtGovDelhi to resolve the problem immediately so that people do not suffer

Some prominent academics have also started supporting Kejriwal’s dharna at the L-G’s residence.

Historian and columnist Ramachandra Guha issued a series of tweets to say “propriety demands that the L-G of Delhi work co-operatively with his own CM and seek a resolution of the differences between Ministers and bureaucrats. To treat an elected CM (with 66 out of 70 seats) with such disregard makes a mockery of democracy.”

He added to good measure that earlier, the Centre did not treat the Delhi government with such contempt.

In the early 2000s, when Sheila Dikshit was CM and AB Vajpayee was PM, the Centre did not treat the elected Government of Delhi with hostility or contempt. They placed citizens’ rights and needs above personal pride and party arrogance. The Modi regime should do likewise. https://t.co/WHsArLizFA