While there is hope that stalled works would resume, files would be cleared expeditiously, warnings from both sides signal continuing unease.

A lawyer briefs the media about the SC verdict on the power tussle between the Delhi government and the Centre in New Delhi on July 4, 2018. Credit: PTI

New Delhi: In its 231-page judgment, a constitution bench of the Supreme Court today held that the Lieutenant Governor of Delhi cannot be an “obstructionist” and is bound to act on the aid and advice of the council of ministers. But the reactions of advocates and politicians from all sides revealed that while many hope that the order would pave the way for allowing smooth functioning of the Arvind Kejriwal-led elected government, there will definitely be more hurdles to overcome.

The major reason behind this is that while the judgment by the bench comprising Chief Justice Dipak Misra, Justices A.K. Sikri, A.M. Khanwilkar, D.Y. Chandrachud and Ashok Bhushan clearly reversed the decision of the Delhi high court that had held the LG to be the “administrative” head of Delhi, by holding out that the “LG is an administrative head in the limited sense, and is not a governor” and that he is “bound by the aid and advise of NCT government in areas other than those exempted”, it would still be left to the subjective evaluation of the LG if he deems a decision of of the elected government to not be constitutional and worthy of being referred to the President.

For its part, the apex court held that the power of the LG to differ from the Delhi Government and make a reference to President was only with respect to exceptional matters under Article 239AA(4) of the Constitution of India and these only pertain to land, police and public order.

The Supreme Court has also stated that while all decisions of the elected government need to be communicated to the LG, there was no need to obtain his concurrence on all of them.

The verdict also called upon the LG to work harmoniously with the elected government and to not mechanically refer all matters to the President without application of mind.

A battery of senior advocates had appeared from both the sides. While Gopal Subramaniam, P. Chidambaram, Indira Jaising, Rajeev Dhavan and Shekhar Naphade represented the Delhi government before the constitution bench, the Centre was represented by additional solicitor general Maninder Singh and senior BJP lawyers like Nalin Kohli and Aman Lekhi.

Indira Jaising, who had argued that the Delhi government should be allowed to function smoothly, especially in the field of social welfare subjects, reacted by tweeting:

The victory today belongs to the people of Delhi and the spirit of the Constitution. This is how a true constitutional court functions. All five of them rose to the occasion and reinforced our democratic rights. People are sovereign,they said.

She also cautioned that there would be “constitutional and political consequences” should the LG wish to “any matter” as “every matter” under the proviso of powers vested in him.

There is sufficient guidance on “any matter” Judtice DYC says purpose of the proviso is related to the fact that Delhi is the national capital , if the LG still wishes to treat “any matter” as “every matter”there will be constitutional and political consequences https://t.co/0P0hjrvdiS

ASG Maninder Singh had argued that “out of 650 files received by the LG in the last three years, there was a difference of opinion on only three cases. Refuting allegations levelled by a bevy of senior lawyers appearing for the NCT government that the Centre is stalling day -to-day decision-making with the LG sitting on files, the Centre informed the bench that there was a difference of opinion in only three odd cases.”

He had also stated that the “Delhi government could not claim powers in violation of a constitutional scheme that set out a vertical division of power between the city government and Centre for administering the capital”.

Reacting to the judgment, he said, “After today’s judgment, if the LG finds that the Delhi government’s decision is not in favour of the people of Delhi, then he can take that matter to the President of India, whose decision will be final. But mundane and trivial issues will not be taken to the president.”

The reactions of lawyers from the two sides clearly indicate that the Kejriwal government may still not be able to push all its decisions past the LG.

However, Kejriwal tweeted that the decision was a big victory for the people of Delhi and a big victory for democracy. He also announced that a cabinet meeting would be held at 4 pm at his residence “to discuss critical projects of public importance which were blocked so far”.

‘Power of transfer and postings vests with elected government now’

His deputy, Manish Sisodia tweeted that following the SC verdict the Delhi government will be able to take its own decisions and will not have to send the files to the LG for his permission on every issue. He also said that the elected government would also be able to decide on the transfer and postings of officers now.

Incidentally, the issue of transfer and postings as also of the functioning of the bureaucracy in Delhi has been flagged several times by the Kejriwal government. Recently, Kejriwal, along with Sisodia and two other ministers, Gopal Rai and Satyendar Jain, had staged a nine-day sit-in demonstration at the LG’s residence to protest against an “undeclared strike” by the IAS officers.

Kejriwal had only yesterday also written to Union home minister Rajnath Singh over his non-inclusion in decisions pertaining to transfer of officials in his government. He had told Singh that while it was the CM’s “prerogative” to choose his staff, this “convention and decorum” had been “regularly flouted”. He had also urged the home minister to ensure that his office staff “not be transferred without his consent”.

Kejriwal had also criticised the frequent transfers and demanded continuity of tenures in the personal staff of the chief minister CM so that they got sufficient time to formulate and execute strategies for the desired results. 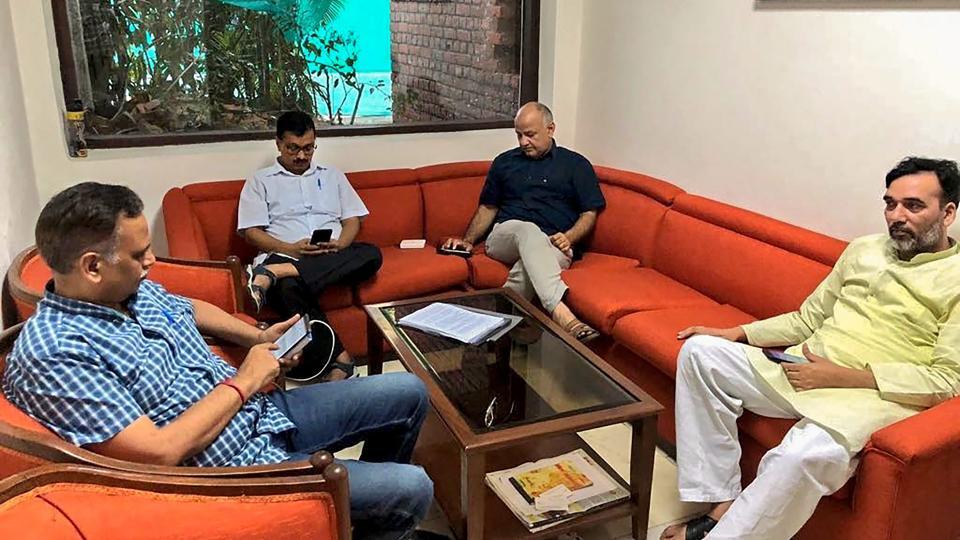 Congress, BJP hope there would be ‘no more excuses for not working’

Reacting to the apex court ruling, Delhi Congress president Ajay Maken said since the apex court has now clarified about the powers in Delhi, he was hoping that “development which has been stalled, ever since the Congress was voted out of power four years ago will start again”.

Now, since the Apex Court has clarified about the powers in Delhi-

We hope that the development which has been stalled, ever since the Congress was voted out of power, 4 yrs ago-will start again

LG and CM, stop this blame-game and develop Delhi as we successfully did for 15yrs!

Former Delhi chief minister Sheila Dikshit too said that the SC verdict has only once again clarified the position laid down by the constitution on the powers of the LG and the elected government.

Delhi BJP president Manoj Tiwari said three things have emerged clearly from the verdict “which Kejriwal and the AAP also need to understand”. He said the judgment has made it clear that “to talk about full statehood is unconstitutional”. He termed the SC order a “major jolt” to the Kejriwal government in the matter as recently it had launched an agitation for seeking full statehood for Delhi.

“Supreme Court has also stated that the elected government will have the powers to work on important matter. Constitution is supreme and LG cannot stall decisions which are constitutionally valid,” said Tiwari, adding that now there would be no excuses with the Kejriwal government for not working.

Union minister Vijay Goel too insisted that the apex court decision has restated the constitutional provision and there would now be no excuse for not working for the welfare of the people. “I am glad that Kejriwal is claiming it to be his victory, He would now have no excuse not to work. There were no differences on issues related to water supply, power outages and even lack of proper school infrastructure regarding which the Delhi high court recently also issued an order. The Kejriwal government should now work and deliver.”

Meanwhile, minister Gopal Rai said the Supreme Court verdict has restored the rights of the elected government which had been taken away after the high court order. “After the HC order, all the rights of the Delhi cabinet had been taken away but now the SC has restored those rights and stated that the elected government can take decisions on all matters except those pertaining to land, police, and law and order.”

“In all other matters, including transfers and posting,” Rai said, “the decision would now rest with the Cabinet. Supreme Court has also stated that the LG’s approval is only needed in matters pertaining to the three reserved subjects.”

Party lawyer and former minister Somnath Bharti too noted that while the SC verdict will allow the stuck projects in Delhi to restart, the party would “work for the full statehood demand for Delhi”. “We will continue to create an atmosphere for it as it is a demand of the people not the government,” he said.