Delhi Elections: How BJP and Its Leaders Are Trying to Fan Communal Sentiments

From sharing social media posts with communal dog-whistles to promises of targeting mosques allegedly built on government land, the saffron party is playing by its rule book.

Screenshots of social media posts by the BJP with communal overtones.

New Delhi: On Monday, the Bharatiya Janata Party (BJP) Delhi unit, from its official handle, tweeted a communally sensitive meme, which has potential to attract action under section 153 A of Indian Penal Code (IPC) for disturbing public tranquillity and spreading communal hatred. The meme has two pictures: the first is an image of a burning bus and the second shows Delhi chief minister Arvind Kejriwal speaking with a skull cap on. Above the picture of the burning bus, “art” is written and above Kejriwal’s picture, in which Okhla-Jamia Nagar MLA Amanatullah Khan can also be seen, “artist” is written.

This is a clear case of “dog-whistle” politics and an attempt to blame Muslims, especially Jamia students, for the violence which took place last month in Jamia Nagar and the neighbouring New Friends Colony during an anti-Citizenship (Amendment) Act (CAA) protest. This despite the fact that not a single person arrested for the violence was a student of Jamia. The party has been criticised for this tweet by a section of Twitter users but instead of removing or issuing any clarification, it has been pinned on the handle to highlight it.

What is important to remember is that this is not the first time that the BJP has indulged in communal tactics like these. Ahead of the Delhi assembly polls, the party and its leaders have been continuously trying to fan communal sentiments. Just after the violence in Jamia Nagar, the party on its official Instagram account posted a cartoon showing Kejriwal and a man wearing a stereotypical Muslim dress – a skull cap, a green scarf around his shoulder, and a long beard – setting a bus on fire, while a lady is trapped inside and the Delhi Police is trying to douse the fire. Last week, BJP MP and an aspirant for the Delhi CM post, Parvesh Sahib Singh Verma promised to demolish religious structures built on government land if his party comes to power. “The government land on which religious places are constructed will be vacated after BJP forms government in Delhi. Complaints have come regarding more than 54 mosques and madrassas on government land in Delhi. The list has already been given to the Lt Governor,” Verma tweeted in Hindi. Verma has also retweeted the BJP Delhi unit’s tweet which has communal overtones.

Notably, Verma has been raising the issue of alleged encroachment of government land by mosques, Muslim graveyards, madrassas and Imambaras for quite some time. In June last year, he wrote to Lt Governor Anil Baijal seeking action against mosques and graveyards allegedly constructed on government land. He had submitted a list of 54 such encroachments to the LG for action. Another BJP MP and the party’s Delhi president, Manoj Tiwari, had also made a similar allegation about other areas of Delhi.

However, a fact-finding report by the Delhi Minorities Commission into the matter found that none of the “masjids, mazaars, madrasas, or graveyards” that Verma named were built illegally. Neither were they encroaching government land, as the MP claimed. Moreover, the commission’s report noted that Verma’s allegations created a sense of fear in the Muslim community. According to the commission, there are “sufficient grounds to initiate legal proceedings” against Verma, who it believes was responsible for triggering communal discord.

Similarly, a day before the announcement of the date for Delhi’s assembly elections, Union minister Amit Shah while addressing a meeting of booth level workers of the party rhetorically asked the people of Delhi, “Kya aap aisi sarkar chahte hain jo Dilli mein dange karwaye? (Do you want a government in Delhi, which conducts riots?)” 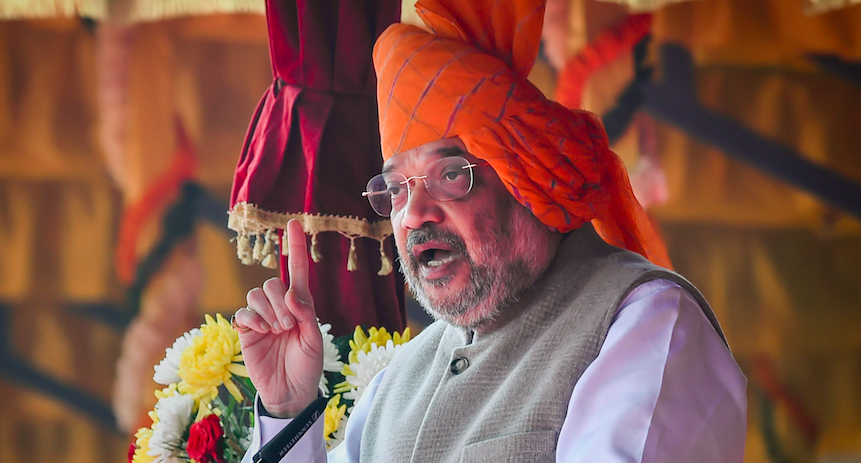 Ironically, research shows that the BJP had been the biggest political beneficiary of violence ahead of elections. A study conducted by researchers from Yale University said “the BJS/BJP saw a 0.8 percentage point increase in their vote share following a riot in the year prior to an election. The polarization of the electorate induced by riots disadvantages Congress in subsequent elections, making it counter-productive for the party’s affiliates to instigate riots following an electoral loss.” Similarly, another study by two researchers of Oxford University found that fatalities and violence against the minority community helped the BJP win elections.

On Thursday morning, BJP leader and the party candidate from Model Town in north Delhi, Kapil Mishra tweeted saying the day of Delhi polling will be akin to India-Pakistan match. “India vs Pakistan, February 8 in Delhi. India and Pakistan will compete on the streets of Delhi,” tweeted Mishra.

Later, in another tweet he alleged that, AAP and Congress Party have created mini-Pakistan like Shaheen Bagh. “To answer that India will stand up on 8 February. Every-time traitors will create Pakistan in India, India of patriots will rise up,” Mishra tweeted in Hindi, attacking AAP leader and deputy chief minister of Delhi Manish Sisodia. According to a tweet by CNN News18, the AAP leader has said, “I stand with the people of Shaheen Bagh.”

The Delhi assembly elections will be held on February 8 and results for the 70-seat house will be declared on February 11. In the last assembly election, the Aam Aadmi Party (AAP) won 67 seats, BJP 3 and Congress could not open its account. Ashish Ranjan, a researcher and election analyst, predicts that if compared to the 2019 general election, the BJP is likely to lose between 20-25% of votes in the assembly election. AAP is likely to gain 30-35% votes from its Lok Sabha tally, he says. In the Lok Sabha polls, the BJP received 57% of the total votes polled in Delhi, while the Congress and AAP received 23% and 18% respectively.

Note: The article was first published on January 23 morning and later updated with Kapil Mishra’s tweets.