'Conspiracy,' Says AAP After Kejriwal Made to Wait 6 Hours to File Nomination

A Congress candidate was also delayed by what turned out to be primarily a line comprising candidates who were former DTC workers. 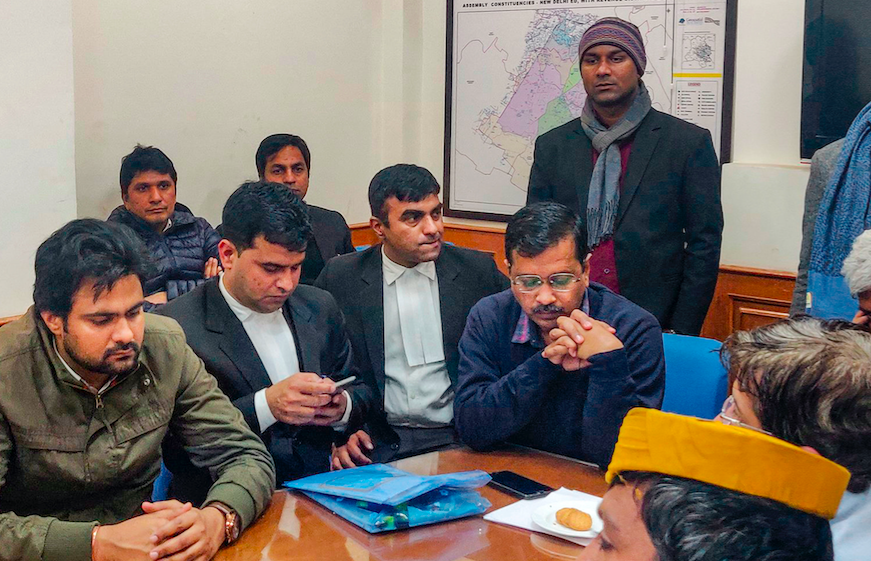 New Delhi: After being made to wait for nearly six hours at the office of the Returning Officer, Delhi chief minister Arvind Kejriwal finally managed to file his nomination papers as candidate for the assembly election this evening. Though Kejriwal reached the election office at around noon, it was only after 6 pm that he could file his nomination as there were 44 other people lined up in the queue before him.

The Aam Aadmi Party has said that the fact that so many candidates were issued tokens ahead of Kejriwal was a conspiracy to harass the chief minister.

Party spokesperson Saurabh Bharadwaj alleged that around 35 of these candidates did not even have proper nomination papers or the 10 proposers required for filing the nomination.

“They r insisting unless their papers r complete and they file Nomination, they won’t allow CM to file Nomination,” he tweeted, adding that “an organised group of 50 candidates was taking tokens to file Nomination at New Delhi everyday for last 4 days but were NOT filing Nominations. They just wanted to harass Kejriwal. This situation was very much in knowledge of RO & DM.”

Around 35 candidates sitting at RO office with CM, without proper nomination papers , without even 10 proposers. They r calling their proposers on phone to come.

Later, he added, “It’s been 6 hours that Arvind Kejriwal is patiently waiting to file his nomination.”

AAP media adviser Nagendra Sharma termed it a ‘below the belt strategy’, adding that it would not work.

Kejriwal too tweeted about the long queue ahead of him. “Waiting to file my nomination. My token no is 45. There are many people here to file nomination papers. Am so glad so many people participating in democracy,” he wrote.

Doesn’t matter. Many of them r filing for the first time. They r bound to make mistakes. We also made mistakes the first time. We shud hand hold them. I am enjoying waiting wid them. They r all part of my family. https://t.co/9s8hRDnjSU

Incidentally, Kejriwal had taken out a road show on Monday to file the nomination but had got delayed in the process due to which he was left with no option but to file his papers on the last day.

Among those who filed their nominations ahead of Kejriwal was Manoj Sharma, a member of the DTC Contractual Employees Union, who claimed that he was only contesting against the Delhi CM to “save the constitution and the common man.”

Incidentally, many of those who filed their nominations during the day had been workers of the Delhi Transport Corporation. After losing their contractual jobs, they had floated a party by the name of ‘Mazdoor Ekta Party’ last year. But while one of them contested as its candidate, around 30 threw in their hats as independents.

The episode raised the question as to whether the chief minister who plays an important executive role at the time of elections too deserves to be treated differently when it came to filing elections because such a “strategy”, as alleged, could also be used in future by other groups to delay other important government functionaries at the Centre and in states.

Incidentally, this alleged tactic adopted by some candidates also delayed Congress candidate from the New Delhi Assembly seat, Romesh Sabharwal. He was issued token number 61 and filed his nomination much after the CM.

Still waiting for my turn. I salute to my government servants who are doing their job since morning. I think it will take another 4 hours. Praying to god for my https://t.co/nPXNMQLL80 I started from Balmiki temple. My retired mother who served in government came with my sister

Earlier in the day, Kejriwal reached the RO’s office along with is wife, Sunita, and daughter, Harshita. Talking to the media, Harshita exuded confidence that he would win comfortably. “Ninety-nine per cent of people feel that his government has done well,” she said.

She told the media that she has been on a leave since October and has been helping Kejriwal fight the polls.

Sunita too said she was actively involved in the campaign and that there has been “overwhelming response from people due to work done in the field of power, water, education and health.” In the future, she said, the AAP government will focus on addressing pollution and transport problems.