AAP's Big Victory: Here's What the Polling Data from Delhi Reveals About Modi vs Kejriwal

AAP has got more votes than the BJP did in the 2019 Lok Sabha polls. It has also gained nearly a lakh votes since its last assembly election. New Delhi: Numbers tell their own story. With the final figures of the Delhi polls now out, it can now firmly be said that on polling day, more people reposed faith in the Aam Aadmi Party, its convenor Arvind Kejriwal and its candidates in 2020 than they did in the Bharatiya Janata Party, Prime Minister Narendra Modi or the saffron party’s candidates in 2019.

More votes for AAP than BJP got in LS polls

In the last Lok Sabha election, the BJP polled 56.86% of valid votes in Delhi, and in the recent assembly election, AAP ended up with 53.57%  vote share. However, in absolute terms, AAP polled 65,981 votes more than BJP.

In the Lok Sabha elections, when BJP won all the seven seats in Delhi and fought in the name of Modi, it got 49,08,541 votes. And this time, when AAP asked Delhi to vote it back to power in the city and make Kejriwal chief minister again, it had 49,74,522 people voting for it. Clearly, AAP has managed to draw more support now than the BJP could in the Lok Sabha polls.

But there are two caveats here. The BJP did not contest three seats in the assembly election, leaving those  for its allies, the Janata Dal (United) and Lok Janshakti Party. Also, the total number of eligible voters rose by nearly 4 lakhs between the two elections.

Between the Lok Sabha polls in May 2019 and now, AAP improved its performance significantly. The party’s appeal for votes in the name of the Kejriwal government’s performance, the free power, water and travel it provided, the improvement in education and health facilities, and its decision to not let the BJP draw it into the issue of the anti-CAA protests at Shaheen Bagh, clearly worked wonders for it.

From getting just 15,71,687 votes and a 18.2% vote share in the Lok Sabha polls, AAP made deep inroads into the hearts and minds of the voters. Ultimately, it managed to influence over 34 lakh more people to vote for it.

On the other hand, the BJP’s vote share dropped by 18.35 percentage points during the period as nearly 13.33 lakh fewer people voted for it in the assembly elections. 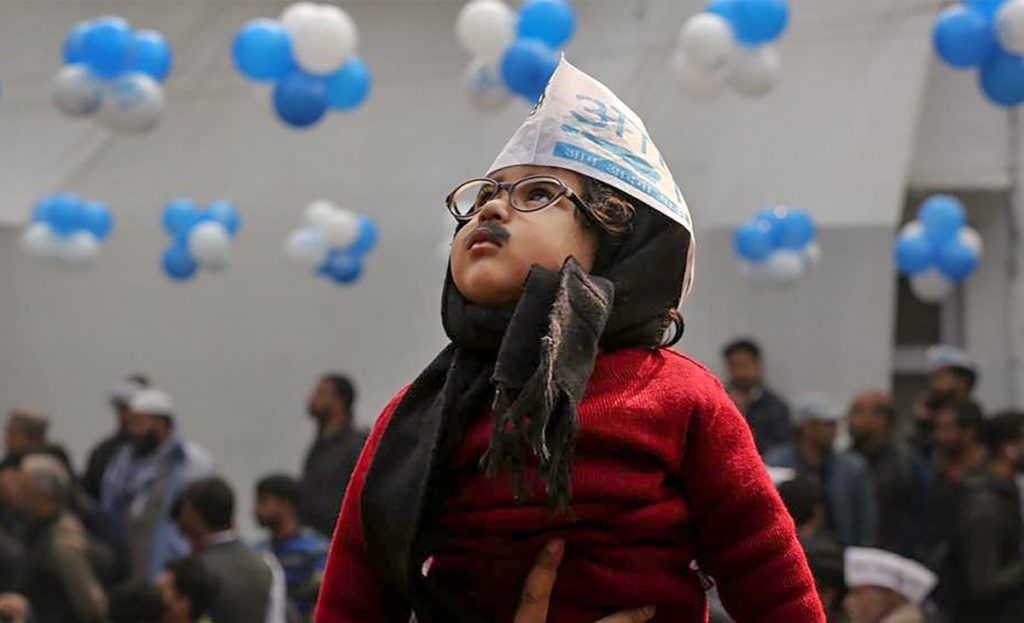 A young child dressed as Arvind Kejriwal at the AAP headquarters in Delhi on Tuesday. Photo: PTI

In the case of the Congress, which had secured the second position in the Lok Sabha polls, the loss was even sharper with its vote share dropping by over 18 percentage points and with over 15.58 lakh people who voted for it seven months ago not returning to vote for its candidates this time.

A comparison between 2015 and this 2020 assembly election shows AAP’s vote percentage dropping marginally by 0.77 percentage points to 53.57%. The total votes for the party increased by just 96,125 over the period. Considering that the total number of voters have increased by nearly 14 lakh during this five-year period, this is a small number.

However, considering that the base figure of AAP’s votes five years ago was very high and that it was contesting this election on its performance, an increase in votes reflects the party’s popularity.

In the case of BJP, its vote share improved by 6.32 percentage points to 38.51% between the two assembly elections and it bagged nearly 7.85 lakh more votes this time.

The Congress, which had a vote share of just 9.70% in the 2015 polls, when it failed to win even a single seat, fared even worse with a 4.26% vote share this time. It also saw an erosion of nearly 4.70 lakh votes during the last five years as it again drew a blank in these elections.

All the opinion polls in early January had indicated that AAP would sweep the elections and BJP would get between 25 and 35% votes. By choosing to attack AAP over the Shaheen Bagh protest and repeatedly raising the issue of the blockade of Kalindi Kunj road, the BJP did manage to strike a chord with a section of the electorate. This reflected in its higher vote share.

Also read: After Election Losses, Sangh’s Hindutva Pitch Will Be Even Louder and Sharper

But if the effect of the BJP’s campaign strategy was visible in the areas surrounding Shaheen Bagh, its impact diminished with distance.

In Okhla, its candidate Braham Singh polled 58,540 votes and got a 29.65% vote share. Though the seat was won by Khan by a margin of 71,827 votes, the high vote share of BJP indicated that its campaign strategy worked in some part. In 2015 too, Braham Singh was the BJP candidate but he had only bagged 39,739 votes then.

In Badarpur, which starts from the other side of Kalindi Kunj road, the BJP candidate Ramvir Singh Bidhuri in fact won by 3,719 votes. He wrested the seat from AAP, polling a total of 90,082 votes, nearly twice the 46,659 which Bidhuri had polled as its candidate in 2015.