'Development vs Division': Campaign for Delhi Polls Comes to an End

The run up to elections in the national capital has seen name-calling, protests, polarisation and firing incidents.

New Delhi: Campaigning for the Delhi assembly election on February 8 came to a close at 5 pm on Thursday. On the last day of campaigning, which has witnessed vitriolic use of divisive language and accusations over the anti-Citizenship (Amendment) Act (CAA) protests at Shaheen Bagh, senior leaders of both the ruling Aam Aadmi Party and BJP, as also the Congress, conducted roadshows.

The entire AAP leadership hit the ground running, centring the campaign around the five years of work done by the Kejriwal government. With the slogan, ‘Achhe beetay 5 saal, lage raho Kejriwal‘, which also formed the peg of their campaign song, the party tried to impress upon the voters that considering its work in the field of utilities, health and education, there was no better option.

At the same time, senior party leaders, including Kejriwal, have also said that the development seen so far is only a work in progress and needed to be carried forward. In late December, the party released its “report card” in which it claimed to have fulfilled all the 70 promises it made in the 2015 manifesto, last among which was the provision of free WiFi.

Thereafter, following the announcement of elections, Kejriwal also issued a 10-point “guarantee card”, assuring among other things underground power lines, round-the-clock clean drinking water and continuation of power and water subsidies. Its manifesto, released only a couple of days ago, had 28 points which promised new measures like Rs 1 crore assistance to families of sanitation workers killed while performing their duties and a “deshbhakti” (patriotism) syllabus in schools. It also declared that education would remain a priority for the party.

While the ruling party focused on development, the opposition BJP made the anti-CAA protests at Shaheen Bagh and the blockade of the Kalindi Kunj road near the area its main campaign issue. Even Prime Minister Narendra Modi, during his first election rally at Karkardooma, said the anti-CAA protests in Seelampur, Jamia and Shaheen Bagh were not a ‘coincidence’ but part of a well thought out ‘experiment’ to divide the country.

The language of the PM, and other party leaders like Shah, Nadda, UP chief minister Yogi Adityanath, Union minister Anurag Thakur and BJP MP Parvesh Verma, during the campaign was repeatedly criticised by AAP and Congress leaders for being “divisive” and “communal”.

Even the Election Commission had to step in on several occasions. It barred Thakur from campaigning for 96 hours after he raised the slogan “Desh kay gaddaron ko” as the crowd completed it saying “goli maaron salon ko”, which put together meant ‘shoot the traitors’.

Similarly, West Delhi MP Verma was barred from campaigning twice for using divisive language. Adityanath was also criticised for repeatedly referring to Pakistan, Shaheen Bagh and biryani during his campaign. 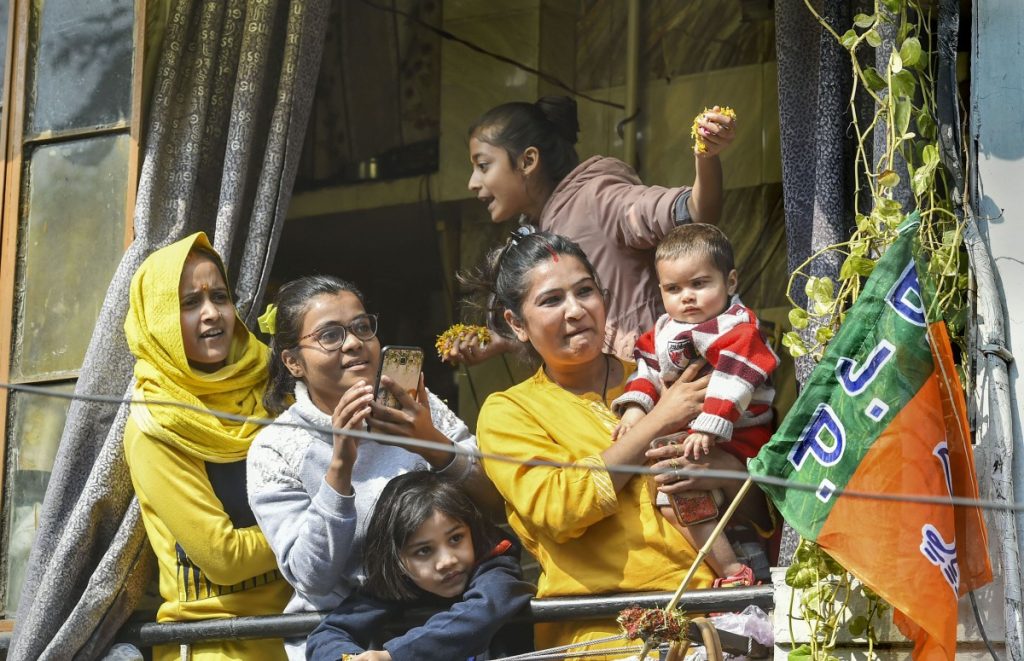 In the days following Thakur raising the slogan, three incidents of firing have been reported at Jamia or Shaheen Bagh. While AAP accused BJP of being responsible for the attacks, the saffron party claimed that AAP was supporting the protests.

In the Shaheen Bagh incident, Delhi DCP (crime) Rajesh Deo said that the shooter Kapil Baisala was an AAP worker. The party and the shooter’s family denied this, and his father said that Baisala was a ‘Modi sevak‘. The BJP lashed out at the ruling party anyway but AAP retorted saying the officer was acting at the behest of Amit Shah.

The EC also issued a warning to the officer and took him off poll duty for issuing statements “adversely impacting the elections”. Earlier it had also transferred out the DCP of South East area for repeated incidents of violence occurring in the area.

As a consequence of the BJP’s repeated invoking of Shaheen Bagh, which was also reflected in its poll song ‘Jago Dilli’, AAP was also drawn into the issue. Its leaders used several tactics towards the latter part of the campaign to counter the BJP’s narrative. Kejriwal even recited the Hanuman Chalisa to hit back at the BJP, which challenged his Hindu credentials. Some AAP leaders also requested the Shaheen Bagh protesters to pause their demonstration.

While the anti-CAA protests were the focus of its campaing, the BJP’s manifesto promised – among other things, 10 lakh jobs in five years, water in every home, infrastructure projects worth Rs 55,000, fill up of all vacant government posts, electric scooters for college going girls and bicycles for girls studying in Class IX.

The Congress, which ruled Delhi for three terms from 1998 to 2013 with Sheila Dikshit at the helm, campaigned around the development work that happened during the late CM’s tenure. But with AAP having taken away its core voter base of Muslim, Dalit and poor voters, the party was a reluctant starter. Interim president Sonia Gandhi had to convince many leaders to enter the fray.

Thereafter, former Union minister Krishna Tirath, former Rajya Sabha MP Parvez Hashmi, and former Delhi Ministers like Haroon Yusuf, A.K. Walia and Arvinder Singh Lovely entered the contest. These leaders and many former MLAs are hoping that their own past work will see them through.

As for senior party leaders, while Sonia Gandhi did not campaign due to ill-health, former president Rahul Gandhi and general secretary Priyanka only campaigned for a couple of days. During their rallies, they attacked BJP for its divisive policies and rising unemployment across the country, and the Aam Aadmi Party for failing to oversee development in Delhi. Priyanka commented that Modi and Kejriwal were compelled to spend hundreds of crores on their publicity only because they did not complete the work they had promised.

The party also released a manifesto which promised free electricity up to 300 units and monthly unemployment allowance of Rs 5,000 to graduates and Rs 7,500 to postgraduates. 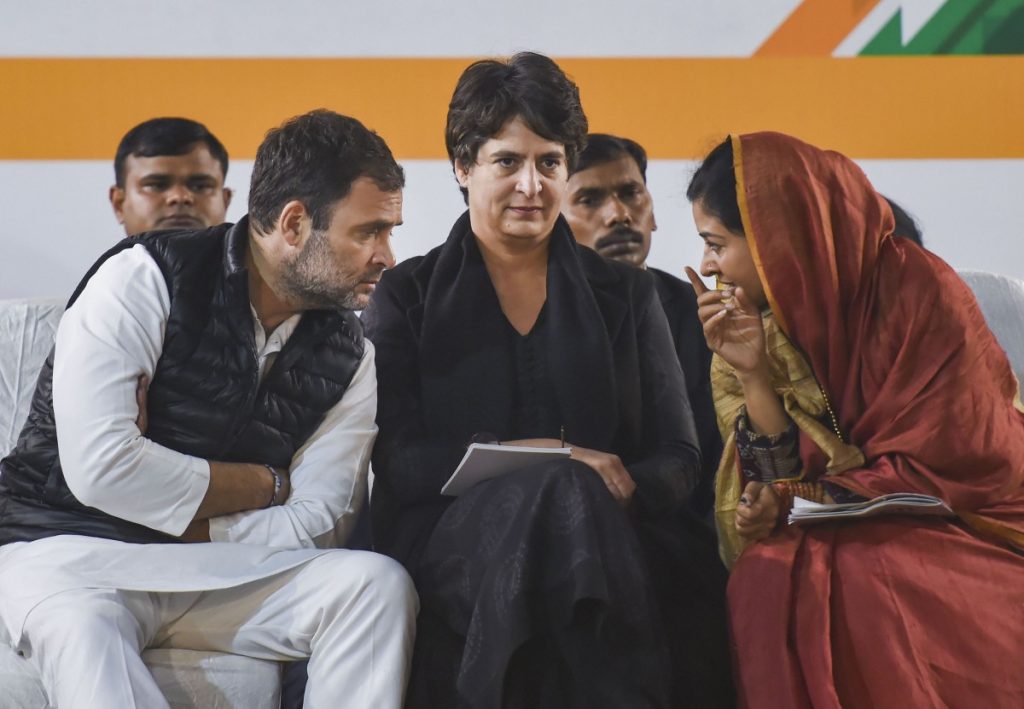 While opinion polls show that the BJP’s campaign may have helped it improve its vote share, AAP still remains comfortably ahead and well placed to get absolute majority. Most polls project that AAP would get over 50% of the votes and over 50 seats. The BJP, which won three seats in 2015, may manage to reach double figures this time. Its vote share has improved significantly over the past month, the opinion polls claim. The Congress would do well to open its account, polls say.

Will history repeat itself?

The BJP has not projected a CM face this time despite AAP’s repeated dares. It will hope that with PM Modi as the focus, people will vote for it, like they did in the 2019 Lok Sabha election.

But if past experience is anything to go by, Delhi’s voters are known to choose differently in state and national elections.

In the 2019 Lok Sabha elections, BJP’s vote share in Delhi climbed higher, to 58% of the votes. The Congress came second, with 22% of the vote share and AAP was relegated to the third position with 18%.

While recent opinion polls show that Modi’s popularity would see the BJP cruise to victory if Lok Sabha polls were held now, they also indicate that people know they are voting to elect a CM. And therein lies the difference.