Delegation of Opposition Leaders Sent Back from Srinagar

The aim of the delegation had been to take stock of the situation in the state, where restrictions have been in place since the first week of August. 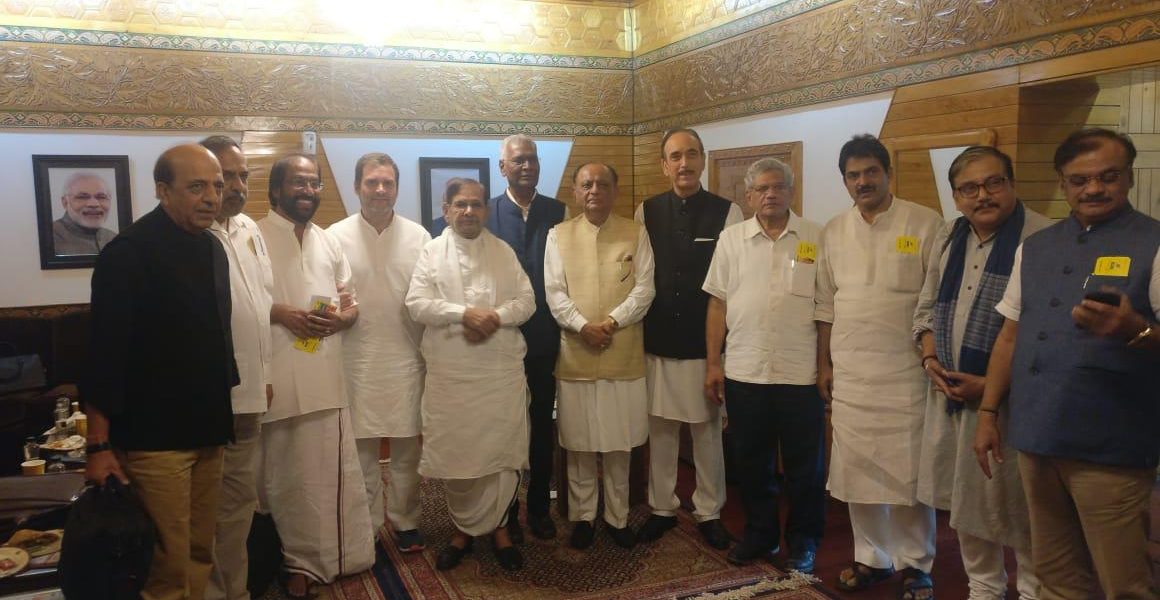 New Delhi: A delegation of opposition leaders, including Rahul Gandhi, Sitaram Yechury, D. Raja, and Sharad Yadav, who attempted visiting Jammu and Kashmir on August 24, was sent back upon reaching Srinagar.

The aim of the delegation had been to take stock of the situation in the state, which has practically remained under a communication shutdown, following the Union government’s move to bifurcate the state into two union territories and dilute Article 370 a fortnight ago.

The 12-member team caught a flight on Saturday at around noon from New Delhi and reached Srinagar just before 2:30 pm.

The delegation comprised of:

After they were refused permission to visit the region, which has been under lockdown for almost 20 days, the leaders issued a statement to the Budgam district magistrate. They said the objection to their movement and apprehensions about their visit were “baseless”. “They are tantamount to allegations against the purpose of our visit,” they said. 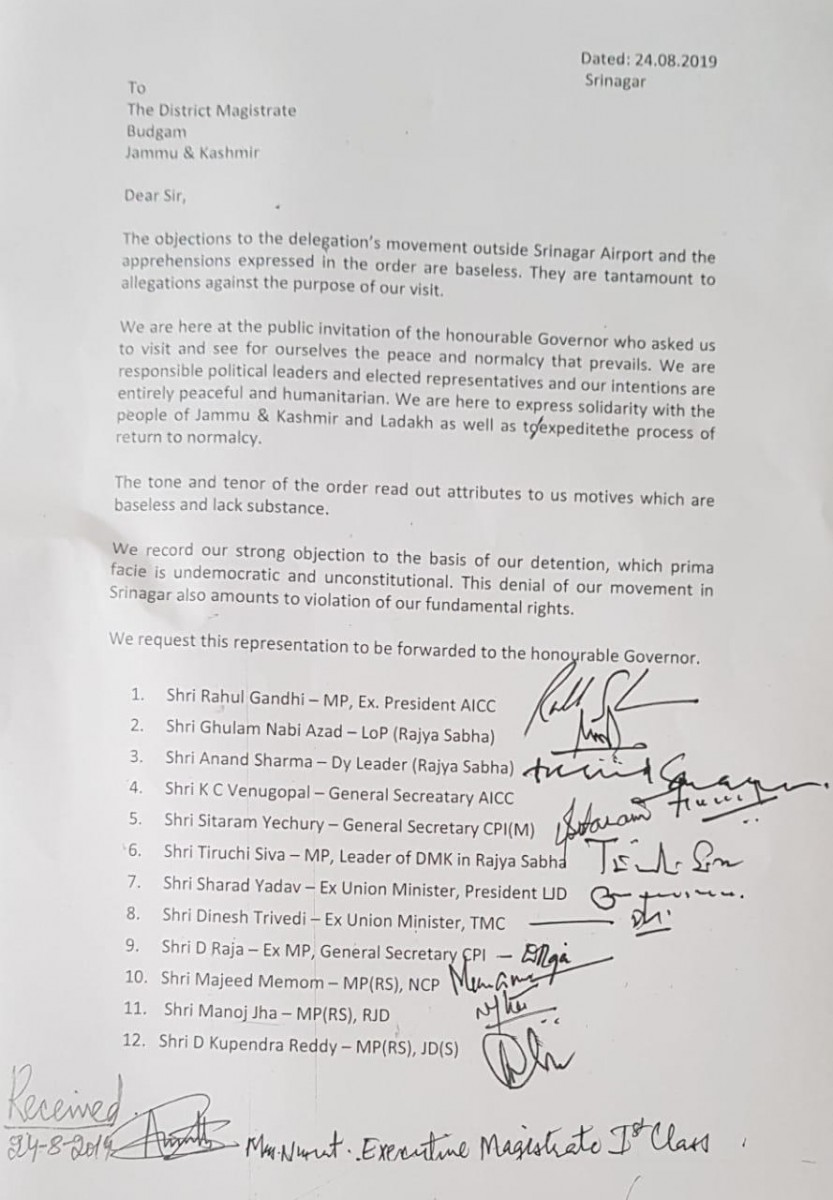 The statement issued by the leaders. Photo: Special arrangement

The leaders said they had arrived at the invitation of J&K governor Satya Pal Malik. ON August 12, Malik said hit out at Rahul Gandhi for remarks that there were reports of violence in Kashmir. The governor said he would “send him an aircraft to visit the valley and observe the ground situation”. Gandhi accepted the invitation and said he would visit along with a delegation of opposition leaders.

A delegation of opposition leaders & I will take you up on your gracious invitation to visit J&K and Ladakh.

We won’t need an aircraft but please ensure us the freedom to travel & meet the people, mainstream leaders and our soldiers stationed over there. https://t.co/9VjQUmgu8u

However, Malik backtracked and accused Gandhi of trying to “politicise the issue”. In a statement, the office of the governor said, “Rahul Gandhi is politicising the matter by seeking to bring a delegation of Opposition leaders to create further unrest and problems for the common people. As he has put forth many conditions for J&K, the Governor is referring the case to the local police and administration to examine the request further.”

On Friday, the opposition staged its first combined protest against the government for stripping Jammu and Kashmir of its special constitutional status. It had decided to send a team to Srinagar to assess the situation in Kashmir soon after this.

This is the first concerted effort by the combined opposition to register its protest outside the halls of the Parliament against what it called a “unilateral and unconstitutional” decision of the government to bifurcate the state and read down Article 370.

Earlier, many leaders including Yechury, Raja, Azad had tried visiting the Valley separately but were forced to return from the airports after being denied entry.

Earlier this week, DMK became the first regional party to agitate at New Delhi’s Jantar Mantar against continued detention of all political leaders in Kashmir. The Dravidian party demanded immediate release of all mainstream political leaders, who have been under arrest for over two weeks.

The government has been claiming that it has eased the curfew conditions and has been making efforts to restore normalcy in the state. Last Monday, schools were reopened and shops were allowed to function. But the government has not yet hinted at even a minor reduction of military troops, which almost tripled in the days preceding its announcement of reading down Article 370. Political activists and social workers are still under detention and there are reports of security forces violently clamping down on all forms of protests.

Soon after the opposition announced the decision to visit the state, the Jammu And Kashmir information and public relations department tweeted to say that political leaders should “not visit Srinagar as they would be putting other people to inconvenience” at a “time when the government is trying to protect the people of Jammu and Kashmir from the threat of cross border terrorism and attacks…”

At a time when the government is trying to protect the people of Jammu & Kashmir from the threat of cross border terrorism and attacks by militants and separatists and gradually trying to restore public order by controlling miscreants and mischief mongers, (1/3)

They would also be violating restrictions that are still there in many areas. Senior leaders should understand that top priority would be given to maintaining peace, order and preventing loss of human lives.

However, Congress leader Ghulam Nabi Azad expressed surprise at the tweets and said that the delegation comprised “responsible” senior leaders who had no intention to break any law.

“We are all responsible political parties and leaders. We are not going to break any law. The Jammu and Kashmir situation is very concerning. It’s close to 20 days. No news for 20 days. The government says the situation is normal. But then they don’t allow leaders to go? Haven’t seen such contradiction… If it’s normal, why aren’t we allowed?” Mr Azad said as he left for the airport this morning in Delhi, news agency ANI reported.

Senior leader Sharad Yadav also said that they don’t need permission from anyone to visit a place in their own country.