A BJP spokesman described the actor as "part of the Tukde Tukde Gang and "Afzal Gang".

New Delhi: Bollywood star Deepika Padukone visited Jawaharlal Nehru University (JNU) Tuesday evening to express solidarity with students who were attacked by masked mobs on Sunday. She is the biggest of the mainstream Bollywood stars to have supported the cause and her presence on campus prompted the Bharatiya Janata Party to call for a boycott of her films.

The actor reached the university campus at around 7.40 pm and attended a public meeting, called by JNU Teacher’s Association and JNUSU in response to Sunday’s attack on students and teachers by a masked goons armed with sticks and rods. However, she did not speak or address the gathering.

Though the RSS student wing, ABVP, has denied organising Sunday’s attacks on campus, plenty of evidence has surfaced about the involvement of its activists and supporters in the violence.

Deepika greeted JNUSU president Aishe Ghosh, who was injured by the goons, and stood as former JNUSU president Kanhaiya Kumar raised slogans against the violence. She left by the time Ghosh started speaking.

Deepika padukone in solidarity with jnu violence. She is not supporting any gang … she is just supporting the humanity.
A huge respect for u and love from jnu❣#DeepikaPadukone pic.twitter.com/GwOqgs5GjW

Her decision to not address the crowd prompted Ghosh to comment, “When you are in a position, you should speak up”. On his part, however, JNUTA secretary Surajit Majumdar  said the actor came to express solidarity with the students.

Ironically, the BJP’s reaction made it clear the A-list actor’s presence at the meeting was enough to alarm the party. Tejinder Singh Bagga, a national spokesman of the BJP called for a boycott of her films “for her support to #TukdeTukdeGang and Afzal Gang”. These are terms the BJP and its allied media organisations coined in 2016 to attack the reputation of Kanhaiya and other JNU student leaders against whom a case of sedition was registered but never followed through for lack of evidence. 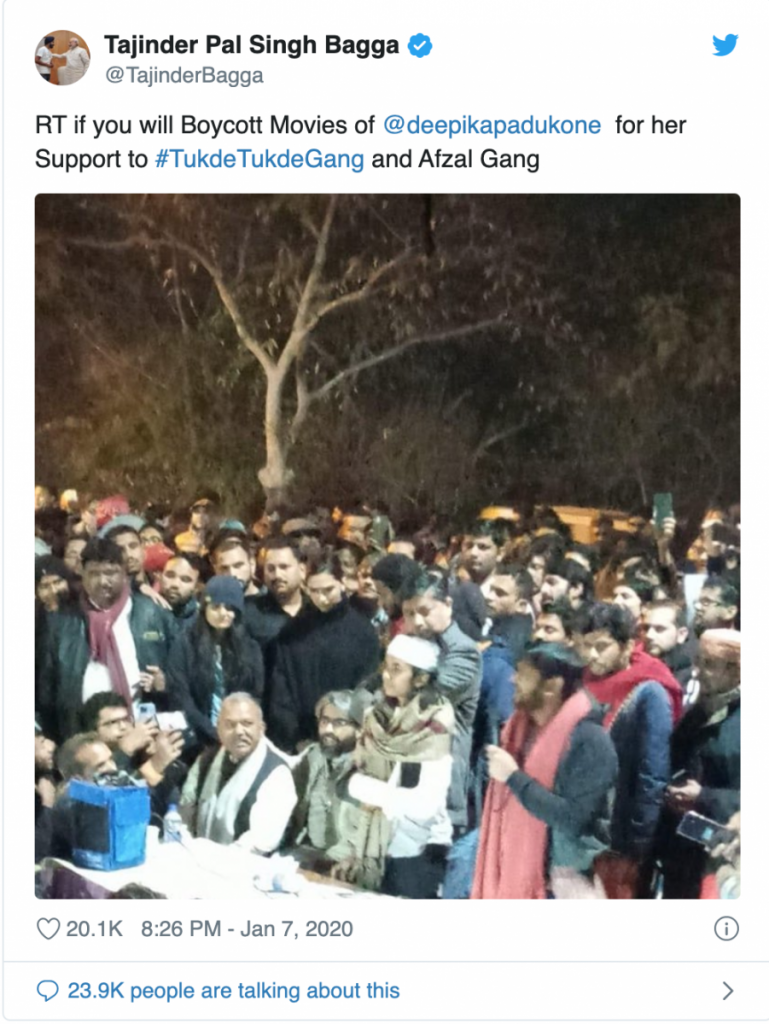 Deepika is in the capital to promote her upcoming release, Meghna Gulzar-directed Chhapaak.

Thank you @deepikapadukone for standing up for students and youth against fascist bullies.

The times they are a changing!

On Monday, the 34-year-old actor told a news channel that she feels proud that people have come out and raised their voice without fear, in reference to the protests against the amended Citizenship Act, the National Register of Citizens and violence in JNU.

“I feel proud to see that we aren’t scared to express ourselves… I think the fact that we are thinking about the country and its future…. Whatever may be our point of view, it’s nice to see,” Deepika told NDTV India.

“I feel proud about it that people are coming out, be it on the streets or wherever they are, they are raising their voice and expressing themselves as it is important. If we want to see change in life and society, it is important that a point of view be put forward,” she added.