UP’s assembly elections will reveal voters’ ability to separate the truth from the fanfare of election rhetoric, number crunching and exit polls. 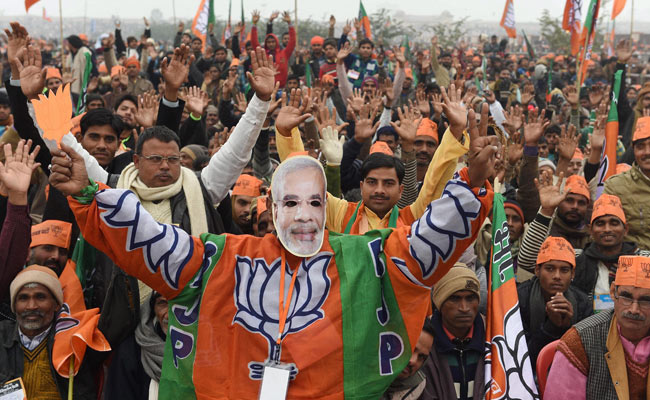 Uttar Pradesh: Psephologists and journalists alike are observing great caution in calling the Uttar Pradesh election, and rightly so. With all the parties declaring their absolute majority and ability to form the next government, and polling happening every other day, weighing all the factors and making educated guesses is tough for even the most experienced.

What will work and what won’t? How are voters perceiving the claims, promises and the trading of allegations and name calling among star campaigners from every party?

My education in the inscrutable ways in which the electorate actually evaluates the parties and candidates on offer took place in Tamil Nadu – the state that regularly confounds pollsters on the day of results. I was a witness to the brutal rejection of the Jayalalithaa-Sasikala combine in the 1996 assembly elections, when Puratchi Thalaivi lost even her own seat and it seemed like the Tamil Nadu voters had taken a permanent affront to the display of wealth and power during her foster son’s wedding in September 1995.

However, the Dravida Munnetra Kazhagam (DMK), which came to power and initiated a number of cases against Jayalalithaa, couldn’t hold on to its reign and Amma was back in 2001. O Panneerselvam’s innings as the chief minister began during this period, when Jayalalithaa’s conviction in the TANSI and Pleasant Stay hotel cases necessitated her vacating the CM’s chair for a long while.

Jayalalithaa seemed to have retained her popularity in spite of these setbacks, and 2006 elections should have reinforced this. Instead, octogenarian M. Karunanidhi, or Kalaignar, was once again elected as the chief minister of Tamil Nadu.

What caused Jayalalithaa a second term in exile? I had at the time heard murmurs about Kalaignar likely contesting his last election – a statement that has subsequently been proved wrong – and thus being given a chance by the electorate. This seemed so feeble and unsatisfying a reason that I spoke to several people around me about it and received evasive replies.

It was clear that voters had their own strategies, which they kept hidden from exit polls. Years later, when I was no longer a resident of Chennai and was visiting in 2015, an auto driver gave me an indication of what voters may have had in mind when they regularly alternated between the All India Anna Dravida Munnetra Kazhagam (AIADMK) and the DMK in every election.

“These people must vacate their seats every five years to ensure they continue to work. Even government officials, if they stay too long in one posting, they get complacent and stop bothering so much about their duties. Politicians must also get a taste of how people can get them ‘transferred’ if they don’t perform.”

It is such comments that reassure one about the function and effectiveness of elections at a time when so many assertions on television channels seem to be in complete variance with the reality. I spent the last week in Uttar Pradesh, where an e-rickshaw driver told me, “Woh hamara note band kiye, hum unka vote band karenge,” (They shut down our notes so we are going to shut down their votes).  A few days before I left, a salaried friend of mine in Pune had said, “What ill effects of demonetisation? Everything is fine now. It was just a few days of hardship, and that too, for a few.”

I had at the time marveled at the cocoon in which she was living, where the lost jobs, struggling daily wage earners and the collapse of demand for so many millions of her fellow citizens meant nothing to her. Since cash had become available in ATMs, the rest of it had become invisible to her.

In the post-truth world and with the Indian television channels faithfully reporting the campaign speeches of the prime minister, it’s as if notebandi never even happened, or it was merely an exercise to bring the rich black money hoarders to their knees. The e-rickshaw driver in Lucknow, however, had his own pithy summary of what has finally been found to have knocked a point off India’s growth rate for 2016-17. Not only did he differ in his perceptions from the spin doctors that run this country, he also had a strategy in place to deal with it in the way he knew would hurt – a loss in elections.

The likely results in the UP election continue to be analysed in the cynical ways we are only too familiar with – number crunching of Muslim, Jatav, OBC votes, speculating on the impact of the PM’s kabristan and smash statements and assertions of BJP being invincible since it had 42% of the vote share in UP in the general elections of 2014.

In the face of such calculations, what I have gathered during the past week is that people on the ground are playing a cagey game about their intentions, similar to what I once experienced in Tamil Nadu. When you begin a conversation with them about politics, they invariably start by saying, “Ab BJP aa sakti hai. Modi ji ka bolbaala hai,” (The BJP can come now, PM Modi is much talked about). These opening remarks are like a testing of the waters, while they gauge where you might be located on the urban-rural-class-occupation spectrum.  But when you probe a little further, encouraging them with remarks like, “Par notebandi se koi asar nahin hua? Bahuton ka to kaam dhandha thap ho gaya,” (But wasn’t there any effect of demonetisation? Many had to close shop), then their true feelings slowly begin to come out.

Not only did most people oppose demonetisation, they also made reference to the vitiating rhetoric of the Sangh in the election speeches. From a gardener and a labourer in a fancy hotel, to a cab driver from a village of Yadavs, each asserted to me that the Hindu-Muslim divide existed only in the neta’s speeches and not in their individual lives. Even the tone of the WhatsApp messages I receive daily from neighbours and acquaintances has begun to change. Yesterday’s message began, “Na musalman khatre mein hai, na Hindu khatre mein hai, dharm aur mazhab se bant ta, insaan khatre mein hai,” (Neither is the Muslim in danger, nor the Hindu. Only humans, divided by religion and faith, are in danger). After receiving bigoted messages for months, all proclaiming aggressive nationalism, this message was most reassuring.

Yogi Adityanath, an MP from Gorakhpur, recently asserted that facts do not matter, people’s anger and perception matters more. It was a brazen definition of post-truth. But my left-liberal spirit, wounded in 2014, finds such an easy assumption of people’s ‘anger and perception’ in favour of the BJP quite contrary to what I have seen and heard last week. UP election results in 2017 are likely to prove to be a watershed in more ways than one, and, unlike most journalists and psephologists these days, I am prepared to stick my neck out and say so. Some of the ways they could surprise us are:

Women will prove to make the decisive difference between victory and defeat, across all classes, castes and age. Women may also vote in complete contrast to their traditional family or community vote.

Voters who were cowed down by the shock and awe of a media blitz, by the sheer aggression and noise of the 2014 general elections, will find a way to put Dainik Jagran’s exit polls in their place.

Voting percentages will show fascinating new patterns, trends that destroy all easy calculations of caste-community vote banks. In fact, many who are secure in their calculations could come unstuck, while a windfall awaits some others.

In our battered democracy, riven with contradictions, voters will prove that they can still see straight through the lies and deceptions that pass for truth.