All eyes will now be on which Yadav faction comes out on top – the 'clean politics' of Akhilesh or the 'status-quo' politics of Shivpal. 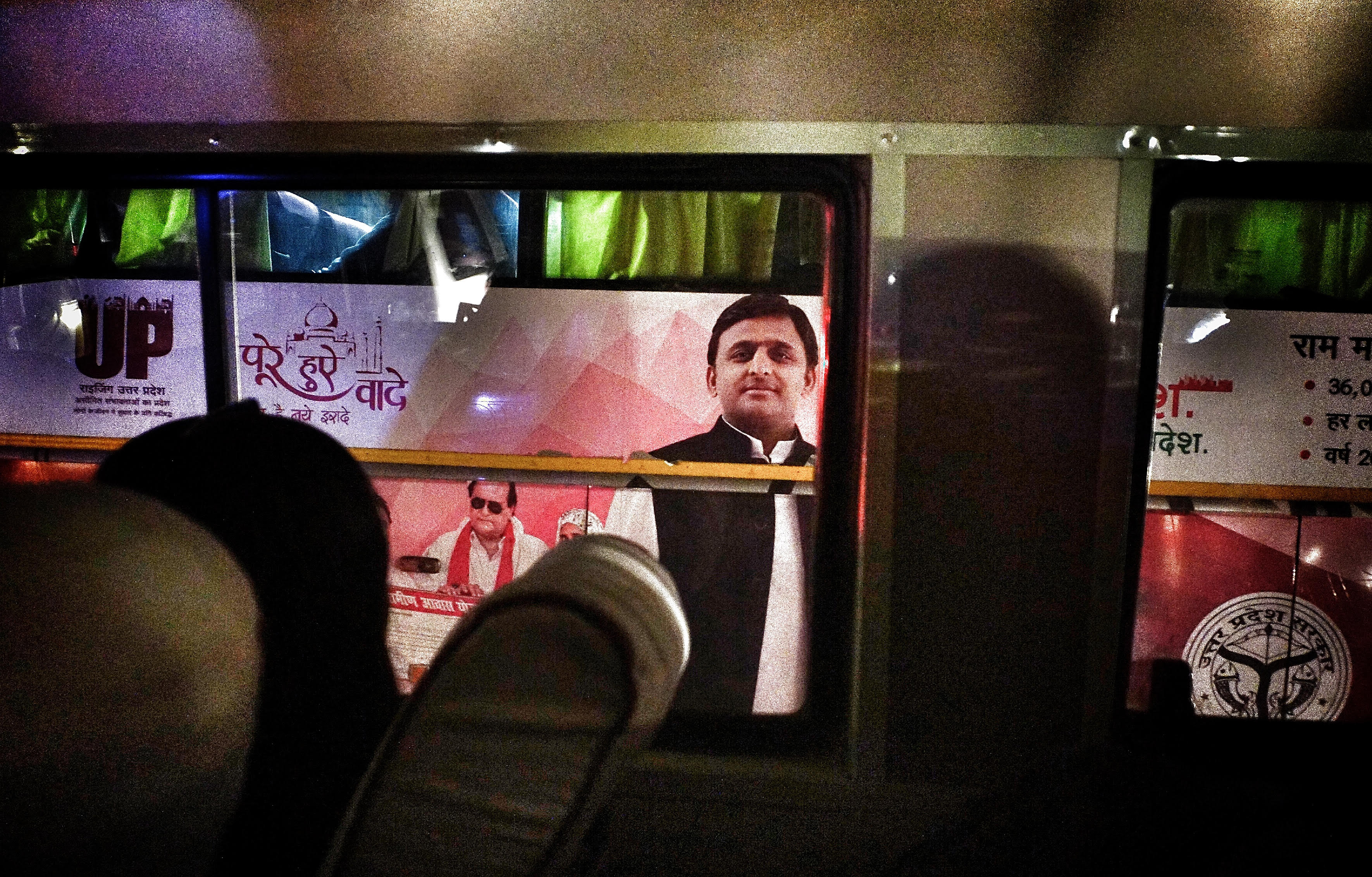 Akhilesh Yadav on a UP tourism bus used as a mascot for showcasing the development work his government has done. Credit: Shome Basu

New Delhi: In a dramatic turn of events, Samajwadi Party chairman Mulayam Singh Yadav on Friday expelled his son and chief minister of Uttar Pradesh Akhilesh Yadav and his cousin Ram Gopal Yadav from the party for six years. He also told the press in Lucknow that the party will select a new chief ministerial candidate for the upcoming assembly polls.

The decision came a day after Akhilesh released a separate list of 235 candidates, defying party supremo Mulayam, who had released his own list of 325 candidates on December 27. After the expulsions, the party is headed for a clear split. This split has looked likely since September, after a public spat between Akhilesh and his uncle Shivpal Singh Yadav, who are two of the most powerful centres in the party.

According to reports, Akhilesh had sent a list of all 403 candidates to Mulayam for the upcoming polls a week earlier but this had irked Shivpal, who then pressed Mulayam to release the party’s list in a hurry.

As expected, Mulayam’s party list did not include leaders who are considered Akhilesh’s supporters. So, the chief minister defied party norms and released his own list, which contained 171 sitting MLAs who back him against Shivpal.

Announcing the explusions, Mulayam told the press, “To save the party, we have expelled both Ramgopal and Akhilesh Yadav for six years from the party. For us party is the most important and our priority is to save the party.”

However, Akhilesh has always claimed that majority of the party MLAs and youth are with him. This, analysts and experts say, has given him the strength to assert himself within the party.

This is the second time Ramgopal Yadav, who has called the expulsions ‘unconstitutional’, has been expelled. In October, he was expelled from the party for six years when Shivpal Yadav, as the SP state president, used his discretionary powers to oust him on charges that Ramgopal was ‘conspiring’ with the BJP to weaken the party. Ramgopal, however, was brought back into the party fold just a month later at the behest of Mulayam, who tried to broker peace between the two factions.

Ramgopal’s expulsion, analysts say, made clear that Shivpal was scoring a political point over Akhilesh, who is seen as close to Ramgopal.

A series of events since September has made sharply visible two bitter factions within the SP – one led by Akhilesh and Ramgopal and the other by Shivpal and a rejuvenated Amar Singh, who was inducted as the general secretary of the party in September after being thrown out by Mulayam himself for ‘anti-party activities’ six years ago. Mulayam, over the last few months, has veered towards the Shivpal faction and has often commented negatively about Akhilesh in various public forums.

After an miserable loss in 2014 parliamentary elections – the party won only five seats out of 80 – the Samajwadi party (SP) started looking inwards. According to sources, the period that followed was marked by a clear ideological battle within the party. While Shivpal wanted to consolidate by channelling the party’s energies towards greater caste and power consolidation, the chief minister pushed forward the idea of re-inventing the party by advancing the message of clean politics and concrete development goals.

What started as an ideological rift within the party snowballed into an everyday tussle. Akhilesh first asserted himself in the party by scuttling Shivpal’s plans to merge gangster-turned politician Mukhtar Ansari’s Qaumi Ekta Dal with SP in June. However, Shivpal made sure that Amar Singh was brought back into the party in September. Soon after, Akhilesh removed Shivpal’s close aides UP’s chief secretary Deepak Singhal and two ministers, Gayatri Prasad Prajapati and Rajkishore Singh. Fearing a rebellion, Mulayam buckled under Shivpal’s pressure and removed Akhilesh as the party’s state unit president. Shivpal was later given the post.

Akhilesh reacted by stripping Shivpal of all key portfolios that he held in the cabinet. However, Mulayam later intervened and forced Akhilesh to hand over cabinet berths to Shivpal again.

Over the last two months, the power tussles continued, with each faction trying to score over the other. Akhilesh made his contempt for Amar Singh public and attacked Shivpal either directly or indirectly quite often. Verbal duels between the two factions became so frequent that it has become a theatrical affair – the most infamous being the October party meeting when Shivpal snatched away Akhilesh’s mike and accused him of lying in public.

Shivpal’s grouse goes back to 2012 when he had to swallow his chief ministerial ambitions in favour of Akhilesh. Around the same time, he failed to secure a seat for his son Aditya from the safe Firozabad constituency which was given to Ramgopal’s son Akshay Yadav. However, after a disastrous performance in 2014, Shivpal has, again, worked his way to the top level of the party.

The feud within the SP is familial in nature – collateral damage which the party has to deal with as a result of its indiscriminate practice of dynastic politics. Mulayam has kept the party intact by consolidating  theYadavs and addressing them as part of his parivar (family). But this short-term measure was undone by its gradual transition from a party which stood for a social justice agenda to a force which is now rated as the top culprit in criminalising UP’s politics.

“Most commentators have written off the internal conflict in the SP as a power struggle between an older and younger generation in a dynastic party experiencing generational change, but the SP today seems to be a party without a clear ideology or self-identity as well,” Sudha Pai, professor in JNU, wrote about the party in The Wire earlier.

“The long trajectory that the party has traversed to reach this point is reflective of major changes visible in UP politics since independence: from class to caste and community-based identity politics, and from the politics of secularism and social justice to the criminalisation of politics and the rise of (SP-supported) mafia dons. While these features are visible in all parties in the state, the SP epitomises these shifts,” she added.

If SP is staring at a bleak political future at the moment, it has definitely to do with this ideological shifts in the party over the last 25 years.

Can Akhilesh come into his own?

Political analysts in UP are of the opinion that in the long-run, this divide may turn out to be good for Akhilesh, who has a long political tenure ahead of him. Lucknow-based political analyst Sudhir Panwar told The Wire, “There seems to be a rising consensus among people of UP that Akhilesh symbolises the clean politician in SP. He has also taken care to advance the message of development politics in the state ahead of parochial caste considerations. It is also generally believed that many SP leaders created only roadblocks for Akhilesh whose intention was to do good work. While one faction is perceived as the reason behind UP’s deteriorating law and order situation, the other led by Akhilesh is seen as pushing new-age development.”

While both the groups may try to outdo each other in the days to come, it is relatively clear that Akhilesh commands greater respect in UP and perhaps, that is the only way forward.

Only time will tell how Akhilesh comes out of the present crisis. Many more resignations and expulsions from the party will follow in the next few days. However, if Akhilesh decides to fight the upcoming polls alone with his team, the possibility of an electoral alliance with the Congress and the Rashtriya Lok Dal as junior partners seems much more probable than before. It is widely known that Mulayam opposed the idea of such an alliance whereas Akhilesh has always favoured it. Sources in the Congress also told The Wire that it was waiting for the family feud within the SP to dissipate and that now it is ready for an alliance with Akhilesh’s team.

If the party splits, a pre-electoral coalition under the leadership of Akhilesh could materialise soon. The other parties in the fray will surely keep a close vigil on the political development in the next few days.

As of now, SP’s escalating crisis is their moment of joy and hope.