The Left party has sought to intervene in a plea filed by the TMC on the matter. 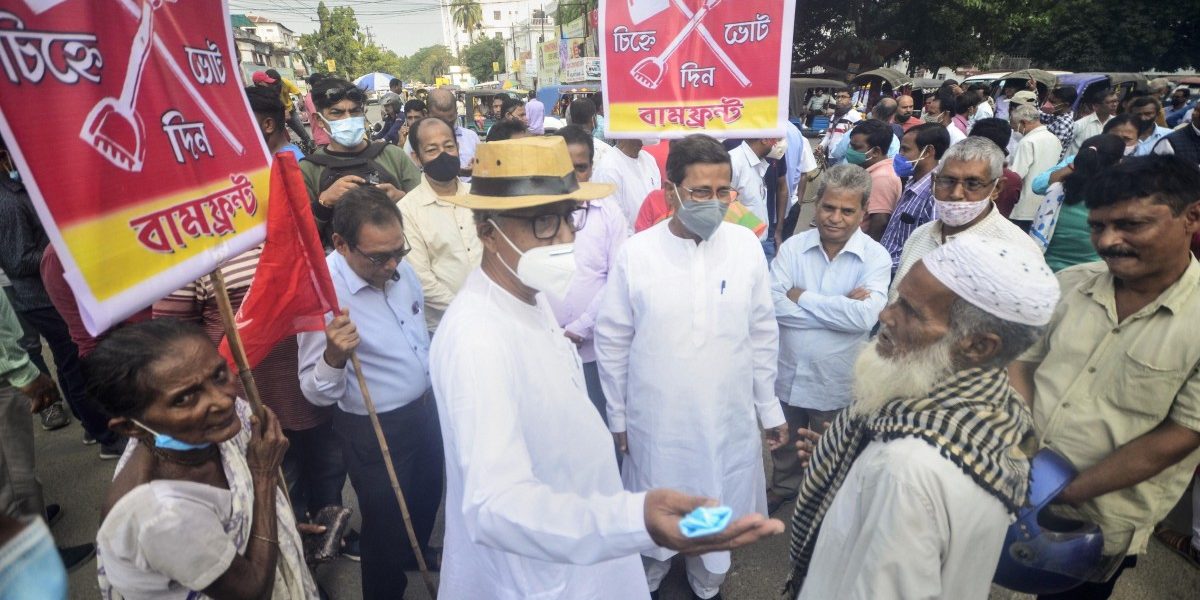 CPI(M) leader Manik Sarkar with supporters during a rally ahead of the Tripura civic body elections, in Agartala, Saturday, November 20, 2021. Photo: PTI

New Delhi: The Communist Party of India (Marxist) on Wednesday (November 24) approached the Supreme Court, saying that the Bharatiya Janata Party in Tripura is “terrorising” the opposition during the local body elections. The CPI(M) is seeking to intervene in a writ petition filed by Trinamool Congress leaders on the same matter.

The TMC has sought contempt action against the Tripura government and other officials for failing to curtail violent incidents against opposition parties in the run up to the municipal polls.

“”The ruling political party workers and their sympathisers have been attacking the CPI(M) workers and sympathisers. They are being subjected to inexplicable and cruel violence. Many of them have lost their lives and property including residential houses. The offices of the Party are also attacked,” the CPI(M)’s application reads, according to LiveLaw.

Opposition party supporters are also being targeted, the application continues:

“Information has been pouring from different poll bound ULBs and several wards of Agartala Municipal Council that large number of miscreants are intruding into those areas at the behest of ruling BJP and indulging into terrorizing the opposition supporters with dire consequences, with the threat not to move to the polling stations tomorrow on 25th November, 2021.”

Local body elections are being held in the state on Thursday (November 25). Earlier, the Supreme Court had refused the TMC’s plea to postpone these elections. A bench of Justices D.Y. Chandrachud and Vikram Nath said then, “Postponing election is a matter of last and extreme recourse. It is our considered view that short of postponing of elections, the apprehensions which have been expressed on behalf of the petitioners by the counsels can be suitably addressed by issuing peremptory directions to the State of Tripura, so as to ensure that the remaining phases of the Municipal elections take place in peaceful and orderly manner.”

“While we are not inclined to accede to the prayer for postponing of the elections, we are equally of the view that it is the duty of DGP and IGP and the home secretary of Tripura to assuage any misgiving about the fairness of the law enforcing machinery in supporting the electoral process,” the bench had continued.

On November 11, the top court had directed the Tripura government to ensure that no political party including the TMC is prevented from pursuing electoral rights in accordance with law and from campaigning in a peaceful and orderly manner. It had issued notice to the state government on the plea by TMC and its Rajya Sabha MP Sushmita Dev seeking security for the party workers and representatives alleging wide scale violence against them.

The matter is set to be heard again on Thursday.