The party also said that there is a need for “far reaching electoral reforms with the urgent need to reform the Election Commission”. 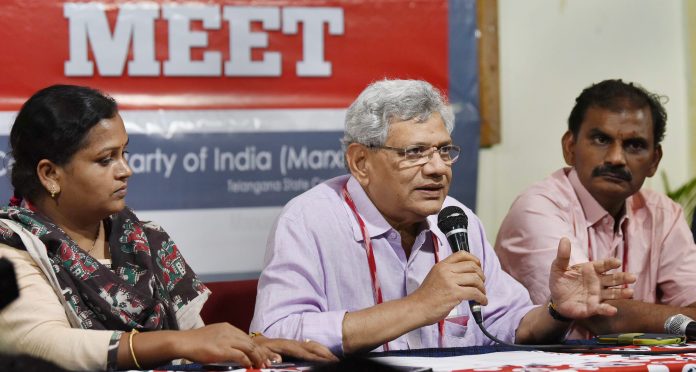 New Delhi: The Communist Party of India (Marxist) admitted on Monday that “a section of its traditional votes” shifted in West Bengal.

Although it stopped short of saying that a bulk of its traditional vote bank moved towards the Bharatiya Janata Party in the recently concluded parliamentary polls, it implicitly accepted what many political commentators and journalists had pointed out during the course of the campaign.

Multiple election reports had said that the Left Front cadre in Bengal were actively supporting the BJP on ground to defeat the Trinamool Congress’s dominance in the state. Most of its leaders too targeted the TMC much more than the BJP in their speeches.

However, at the time, the party leadership said that the reports were not true.

When the results came out, the Left Front could not even retain the two seats that it had won in 2014. It was clear that it had ceded most of its political space to the BJP.

Also read: Ground Report | CPI(M) Has Been a Major Force Behind BJP’s Mainstreaming in West Bengal

CPI(M)’s losses matched BJP’s gains in the state – a fact that the central committee of the CPI(M) which met for a post-poll review at New Delhi from June 7 to 9 refrained from admitting.

It blamed the Congress for employing “soft Hindutva” to counter BJP’s “hardcore Hindutva” for the saffron party’s unprecedented victory.

“The opposition parties, the Congress in particular, failed to put in place the unity of secular opposition parties that was being projected in the run-up to the elections… The ideological battle between Hindutva and secularism was not forcefully conducted,” the party’s press release stated.

The party also said that there is a need for “far reaching electoral reforms with the urgent need to reform the Election Commission”.

However, it pinned its own reverses in Kerala, West Bengal, and Tripura partially to the BJP’s “new narrative of communal nationalist jingoism” and mostly to the use of money and muscle power by parties like the BJP and TMC.

In Kerala, the party said that people of Kerala felt that Congress would be a better “alternative secular government” to the BJP, and that “secular-minded people and minorities” voted for the grand old party.

It defended the Left-Democratic Front government in the state in trying to implement the Supreme Court judgement on Sabarimala and accused the BJP and Congress-led United Democratic Front of creating “misgivings amongst a section of believers”.

The party also blamed the media for playing a “big role” in “building a binary narrative that aided such polarisation between the TMC and the BJP”.

“There was a high anti-incumbency against the TMC.  The CPI(M) and the Left Front were not seen as the alternative and this led to a shift in a section of our traditional votes. The Congress’s refusal to accept the Left’s proposal for maximising the pooling of anti-BJP, anti-TMC votes bolstered this binary narrative,” the party statement said.

The party said that it is conducting a detailed review of booth-wise voting patterns.

“In both these states (Tripura and West Bengal)… the party committees are evaluating earnestly the erosion in our traditional support base and will draw up urgent steps to be undertaken to bring these sections back into our fold,” the central committee’s statement said, admitting that “the independent strength of the Party and its political intervention capacities continue to be weakened”.

For the CPI(M), the 2019 electoral results, in which it won two seats from Tamil Nadu where it was a part of the Dravida Munnetra Kazhagam-led alliance is quite a steep fall.

Led by the CPI(M), the Left Front government enjoyed a 34-year-old uninterrupted rule from 1977 until 2011 in Bengal until Mamata Banerjee-led Trinamool Congress displaced it from power.

As part of its “post-election challenges” and “tasks” ahead, the party said it would draw up a programme to foreground issues regarding livelihood concerns of people, constitutional rights, and civil liberties in Indian polity. According to the party, these issues have suffered a setback in face of BJP’s hyper-nationalist, anti-minority campaign.