The party traditionally contests 32 seats while leaving the rest for its eight Left Front partners. 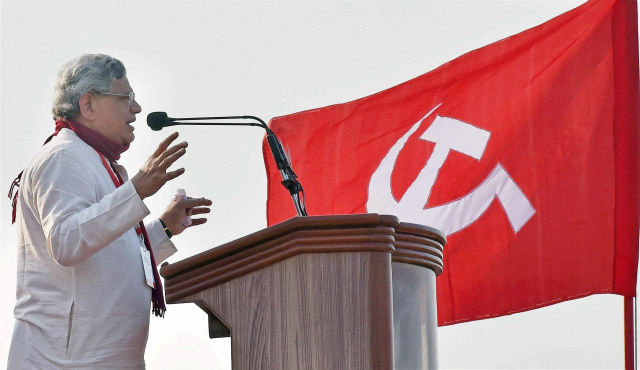 Kolkata: The largest communist party in India, the Communist Party of India (Marxist), is likely to contest only 20 of the 42 Lok Sabha seats in West Bengal, The Wire has learnt.

This could be a new low for the party as it traditionally contests 32 seats while leaving the rest for its eight Left Front partners.

Ever since it lost power in the 2011 assembly elections to the Mamata Banerjee-led Trinamool Congress (TMC), the CPI(M)’s strength in the state has consistently been declining. The trend reflected in the party’s electoral performance. In the 2014 parliamentary polls, the CPI(M) could win only two seats from the state, which it had governed uninterruptedly between 1977 and 2011.

Similarly, the Left Front was handed a comprehensive defeat by the TMC in the 2016 assembly elections. It fought the polls in alliance with the Congress but ended up finishing as the third force in the state assembly. The Congress, which contested only 90 seats in the 295-member assembly, won 44. The CPI(M) contested 147 but could win only 26. The total Left Front tally was a meagre 32 against the TMC’s 211.

At this juncture, it is unclear whether the Left Front will ally with the Congress in the upcoming parliamentary polls. According to party sources, it is still mulling over the possibility of such a tie-up. Alliance negotiations had reached a deadlock last month when the Congress insisted on contesting the Raiganj and Murshidabad seats – both currently held by the CPI(M).

It appears that the CPI(M)’s decision to contest from fewer seats in the upcoming parliamentary polls was taken to accommodate the Congress if the alliance comes through. If the party fails to strike a deal with Congress, it may offer the remaining seats to its Left Front partners like the Communist Party of India, Revolutionary Socialist Party and the All India Forward Bloc, party leaders said.

However, it seems that the other Left Front constituents are not keen on allying with the Congress. West Bengal state secretary of the All India Forward Bloc, Naren Chatterjee, told The Wire, “In last month’s Left Front meeting, nothing has been discussed on whether the Front should enter into an alliance with the Congress or not. Hence it’s not a Left Front decision. It is a decision of an individual party,” he said.

In an interview to The Wire, Mohammed Salim, a CPI(M) veteran and MP from Raiganj, confirmed that the party could contest fewer seats. “We have marked out 20-22 priority seats but the decision hasn’t been finalised yet,” he said. Salim, however, asserted that he will be contesting for the Raiganj seat.

Speaking to a regional television channel, Left Front chairman Biman Basu, too, had earlier said, “CPI(M) in Bengal had decided not to field candidates from seats where we feel we will come third or fourth position.”

The Left Front has been raising the slogan “Oust BJP, Save the Nation; Oust the TMC, Save Bengal”. It appears its electoral calculations reflect this spirit.

A CPI(M) leader from Bengal, on the condition of anonymity, told The Wire, “Our objective is to defeat TMC and BJP, for that we may need to compromise some seats. No final decision yet. But we will ensure that there is no four-way contest in any seat.”

With its unenviable organisational strength and leadership, the Left Front, it appears, is trying to prevent a triangular contest that may put either the BJP or the TMC in a favourable position. This reflects in its electoral calculations for different constituencies.

Many of the front’s supporters think that these electoral strategies mirror the CPI(M)’s political failures. Over the last few years, the CPI(M) has lost considerable ground and has not been able to build momentum.

Santosh Das, a longtime party worker from Dum Dum, North 24 Parganas, spoke about the broken relationship between the top leadership of the Left Front and its cadres.

“We have no hope. The party leadership is failing to motivate workers on the ground. Party can’t win the election with a fractured organisation,” he said.

According to him, the Left Front has failed to capture the widespread anger against the current TMC dispensation. He said corruption and the use of muscle power in the Mamata Banerjee-led government have increased drastically while “democratic voices” have shrunk.

Shyamal Guha, a longtime CPI(M) supporter, said, “We are no more the principal opposition in the state, the BJP has taken over.”

He added, albeit with a heavy heart, that he would vote for the Left Front “till he dies”,  but squarely blamed the leadership for failing to bring in “new faces” to revive the party.

A longstanding complaint against the Left Front is that the old guard has been reluctant to make way for a new generation of leaders. The top-to-bottom structure of the party, built on the Leninist idea of “democratic centralism”, makes it all the more difficult for new leadership to emerge.

Political analyst Biswanath Chakraborty argued that the old-timers of CPI(M) are “too self-centered” to leave the position they enjoy. “For the past seven years, Surjya Kanta Mishra has failed as the secretary of CPI(M) West Bengal State Committee, but still he won’t give away his position,” Chakraborty said.

What does Congress say?

The grand old party appears to be caught in a bind in the state. At the national level, the Congress leadership has been actively liasoning with the TMC to build a united opposition front against the BJP. However, its state-level alliance with the Left Front has prevented the party from actively engaging the TMC in Bengal.

Moreover, the Congress is strong only in some pockets of the state, which gives it little room to manoeuvre in state polity. It has emerged as a bargaining force only after the 2016 assembly polls in which its tally is higher than the Left Front.

Precisely for these reasons, party leaders have remained tight-lipped. Rajya Sabha MP, Pradip Bhattacharya, who attended the preliminary discussions with Left Front leaders, told The Wire, “Nothing (the alliance) has been finalised yet, but we are hoping for a positive outcome.”

Portraying the Left Front as the principal roadblock, Chakraborty said, “The alliance has hardly any importance for the Left Front. No way can the Left increase its tally from Bengal.”

Congress state vice-president, Omprakash Mishra, however, made it clear that an alliance with the Left Front would be better than contesting alone, especially with the BJP’s surge in the state. “Seat-sharing between Left and Congress is imperative, there is no other way. However, the details of the arrangement are proving to be difficult but we are hopeful,” he said.

Amid this tussle between the two parties, the CPI(M)’s only demand is that the seats won by Congress and Left Front in the last general election should be held by the respective parties. “Our primary demand is Congress and Left should retain the seats they won. If that fails, there won’t be any understanding,” said Kallol Majumdar of CPI(M).

Alliance or not, the struggle for the Left Front to revive itself in a state where it was an undisputed leader for 34 years is there for everyone to see.