The Yechury-Karat Debate Frames Left Politics In a False Binary

Rather than chasing the mirage of a grand secular alliance, the Left must take the lead in launching powerful struggles on the ground. 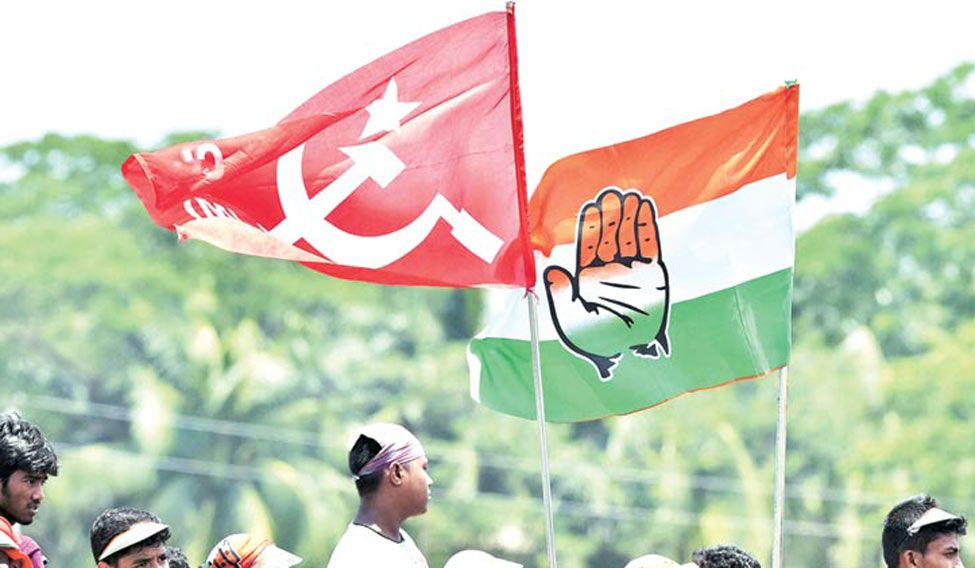 Whether or not to form a pre-poll alliance with the Congress has been a contentious issue within the CPI(M). Credit: PTI

Media reports on the Communist Party of India (Marxist)’s central committee meeting held in Kolkata (January 19-21, 2018) indicate that the party is majorly divided on the issue of its current political assessment and tactical position. According to these reports, the draft political resolution presented by party general secretary Sitaram Yechury was defeated (by 31 votes against 55), and the forthcoming CPI(M) congress in Hyderabad is now expected to take up the draft attributed to former general secretary Prakash Karat for deliberation and adoption. Within the CPI(M), the division is being widely seen as a clash of the ‘Bengal line’ and the ‘Kerala line’. Beyond the CPI(M), among broad progressive liberal circles, this is being seen as a clash between a pragmatic mass line and a puritan isolationist position, a conflict between people who understand the nuances of popular electoral politics and those who are driven by copybook Marxist dogma.

These are very superficial and misleading lines of demarcation. The CPI(M) in Kerala is as much a deft practitioner of electoral politics as the CPI(M) in West Bengal once used to be. Kerala is where communists first came to power in 1957, and despite periodic defeats, they are still in power after 60 years. This may not be as spectacular as the 34-year-long reign of the CPI(M) in West Bengal, but then the CPI(M)’s fall in West Bengal has been no less spectacular. In contrast, the stable and protracted Kerala saga is certainly no less significant than the West Bengal story of the CPI(M). Let us, therefore, try and look beyond these superficial stereotypes at the real and deeper political questions.

What the debate is all about

The debate apparently revolves around two key issues. How should the CPI(M) assess the current Narendra Modi regime and the present phase of Sangh-BJP aggression? And what should be the CPI(M)’s electoral/political tactics at this stage? Yechury reportedly argues that fascism is staring us in the face and the Left must forge a broad secular alliance to combat fascism. Karat, on the other hand, has argued that what we are facing is not fascism but communal authoritarianism, and an alliance with the Congress is not the answer to this challenge.

There is indeed wide agreement among Left-liberal circles that what we are experiencing in India today is nothing short of fascism. We must not wait for a complete overrun of bourgeois democracy and the chilling reality of concentration camps, gas chambers and the horror of holocaust to say that fascism is ravaging India. The communal lynch mobs, the numerous vigilante squads, the intensified Brahminical-patriarchal aggression, the targeted killings and mysterious ‘deaths’ and ‘disappearances’ of dissenting voices and common citizens are enough warning signals that we can ignore only at our own peril. True, India is a former colony now dreaming of becoming a global power under imperialist tutelage, while Germany under Hitler was a cornered and declining colonial power trying to achieve global supremacy and racial ‘purity‘ and ‘pride’ through internal fascism that spilled and grew into a world war. But these distinctions in no way negate the fascist essence of the Sangh-BJP Hindu supremacist project of turning secular India into a Hindu rashtra.

Had the Modi government been only about the Adani-Ambani brand of crony capitalism and the aggressive pursuit of the policies of privatisation and globalisation, coupled with arbitrary measures like demonetisation, the Goods and Services Tax and Aadhaar, we could have perhaps called it just another authoritarian neoliberal regime. But the ever-growing domination of the RSS in the entire scheme of things makes the current regime undeniably fascist. The RSS has all along been a fascist organisation with a fascist project, and now that it has acquired such a controlling grip on state power, it is in a position to unleash its entire agenda at a breakneck speed. It is, therefore, essential to oust the Sangh-BJP dispensation from power and what happens in elections is definitely of crucial importance.

But the BJP has not risen overnight; it has had a steady and spectacular growth over the last three decades. This has been possible because of a political vacuum created by the discrediting of successive governments and the complicity and capitulation of a whole range of parties of the ruling classes in dealing with the BJP. The fact is that there are more parties today willing to do business and share power with the BJP than the ones that are ready to fight against it. We certainly need a credible alternative with a stronger democratic content and foundation to effectively defeat, expose and isolate the Sangh-BJP establishment. A dynamic and vibrant Left can surely play a big role in building and energising such an alternative. 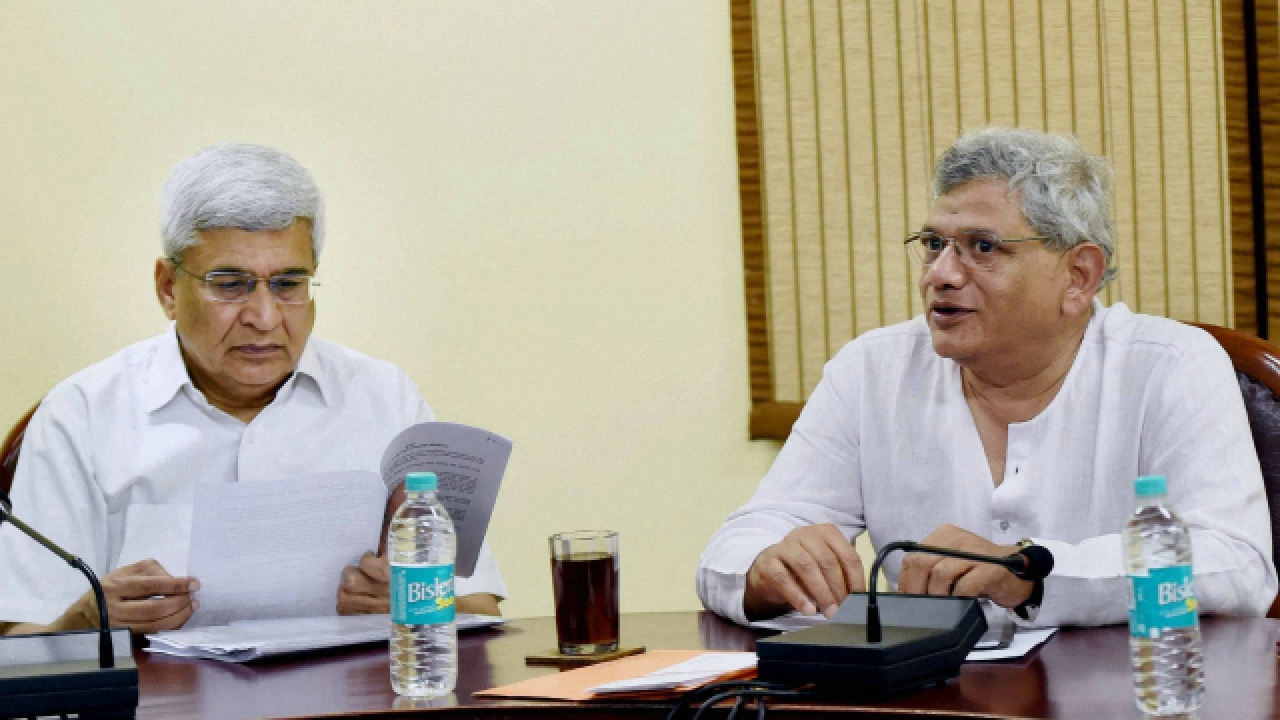 The simple formula of a broad secular alliance with parties easily crossing over from the ‘communal’ to the ‘secular’ camp and back (Nitish Kumar’s Janata Dal United in Bihar being perhaps the most glaring but not the only example) has only discredited secularism and not provided any stable alternative to the BJP in any province in India. It is one thing to devise an electoral strategy to ensure the BJP’s defeat on as big a scale as possible or to try and work out any possible post-poll arrangement to keep the BJP out of power, but reducing the Left’s tactics to the illusive idea of a grand secular alliance is a different proposition and a futile exercise, if the experience of the last three decades is anything to go by.

It was the presumed Congress-CPI(M) proximity that led to the rise of the TMC in West Bengal and the BJP backed it fully, directly when the TMC was a part of NDA during the early Atal Bihari Vajpayee years at the Centre, and indirectly even after the TMC quit NDA, to secure the CPI(M)’s ouster from power. Of course, even after that the CPI(M) had managed to secure 80% majority in 2006 and its fall from that height has little to do with its equations with the Congress. The collapse was triggered by the internal derailment of the Left Front government, illustrated most starkly through the Singur-Nandigram-Lalgarh episodes, coupled with the CPI(M)’s complete identification with and reliance on the government and the bureaucratic arrogance and alienation of the CPI(M) leadership at different levels of the party and government from the people. The CPI(M) refuses to acknowledge and address this basic problem, smugly blaming the people for bringing the TMC to power in the state.

Today, for both the CPI(M) and the Congress, Kerala is a crucially important state. It is well known that the RSS has a fairly strong and extensive network in Kerala even though the BJP’s electoral success is still very much limited. The Congress-CPI(M) alliance in Kerala can only facilitate the BJP’s rise in Kerala as the main opposition force. In Tripura, the Congress has effectively given way to the BJP as the main opposition force in the state. And in West Bengal, even as the CPI(M) treats the TMC as the main target and virtually equates it to the BJP, at the moment the TMC and the BJP appear at loggerheads and the TMC remains the biggest anti-BJP force in the state in public perception. Indeed, if the CPI(M) sees a broad secular alliance as the answer to the BJP, then it should reinvent and rehabilitate itself as a junior partner of the TMC – and to be sure, that will again be a great service to the BJP.

A strong and dynamic Left is the need of the hour. The experience of the post-2014 political scene tells us that while most opposition parties, the Congress included, have often been clueless and demoralised, and devoid of any major oppositional or agitational initiative, there has been no dearth of popular agitations challenging the BJP and throwing up new faces and new forces in the process. The story of the recent Gujarat elections was as much a stunning corroboration of this fact as it was about belated attempts at reviving the Congress under the leadership of Rahul Gandhi. And by launching the election campaign (as well as the exercise to review the election results) from the Somnath temple, the Congress has once again revealed its proclivity to compete with the BJP on the latter’s own turf of Hindutva, the suicidal streak that has enabled the BJP to go about setting the agenda ever more aggressively, compelling a clueless Congress to remain limited to belated defensive responses.

Rather than chasing the mirage of a grand secular alliance, the Left must take the lead in launching powerful struggles on the ground and unleashing bold socio-cultural and ideological-political campaigns and initiatives. Prompt intervention on every issue and concerted efforts to build and promote struggles in defence of democracy is the key to defeating the BJP in the coming series of elections going up to the all important showdown in 2019. The Left approach and tactics must be aimed at increasing and leveraging the strength of the Left and maximising its initiative and impact. The Yechury-Karat debate frames the tasks and direction of the Left in a false binary – a powerful and independent assertion of the Left becomes all the more urgent in the face of the growing fascist danger. This assertion is perfectly consistent, and must be combined, with a readiness to explore suitable electoral tactics in keeping with the objective political conditions in different parts of the country and the central objective of defeating the BJP and strengthening the Left.