“Traditionally, CPI(M)’s politics has centred around land rights and peasants’ movements. But these young leaders have a much broader political perspective," said Rajat Roy, assistant professor at Presidency University.

Kolkata: In a significant departure from its erstwhile inclination to put faith in the old guard, the CPI(M) has named a number of young candidates — mostly present or former student leaders — for the upcoming assembly elections in West Bengal.

A previous report in The Wire in November 2020 had quoted senior CPI(M) leader Sujan Chakraborty as having said that the party was nurturing young upcoming leaders who would be brought to the forefront of electoral politics at the right time.

The most prominent face among the young candidates, named by CPI(M) state secretary Biman Bose, is Students’ Federation of India (SFI) leader Aishe Ghosh, who hails from Durgapur in Paschim Bardhaman. Twenty-six-year-old Ghosh, who will contest from Jamuria in her home district, is a research scholar at Delhi’s Jawaharlal Nehru University (JNU) and president of the JNU students’ union. Her name frequently dominated headlines in January 2020 after she was injured in an attack on the JNU campus allegedly orchestrated by the student wing of the Bharatiya Janata Party (BJP), the Akhil Bharatiya Vidyarthi Parishad. The picture of a heavily bandaged yet smiling Ghosh soon became a symbol of grit and steely resolve.

At Jamuria, Ghosh will fight against Trinamool’s Hareram Singh, a leader with a background in trade unions. In 2016, Left Front candidate Jahanara Khan had won the seat by a margin of around 7,500 votes.

For the mercurial Nandigram seat, which will see the mother of all battles in this election, the CPI(M) has chosen 36-year-old Minakshi Mukherjee as its candidate. Minakshi, a fine public speaker, is the state president of the Democratic Youth Federation of India (DYFI). Unfazed by the prospect of taking on behemoths like Mamata Banerjee and Subhendu Adhikari, Mukherjee spoke to The Wire on her way to Nandigram on Thursday morning.

Also read: From JNU to Jamuria: Student Union President Aishe Ghosh to Test Her Brand of Politics in Bengal

“The people of Bengal have already given their mandate at the Brigade rally on February 28. I am confident because everyday in Bengal, the youth, the working class people, the women are coming out on the streets against corruption and state sponsored atrocities. In Nandigram and elsewhere in the state, the BJP is nothing but Trinamool’s B Team. People don’t want them. They want a third alternative, and that is us,” Mukherjee said. 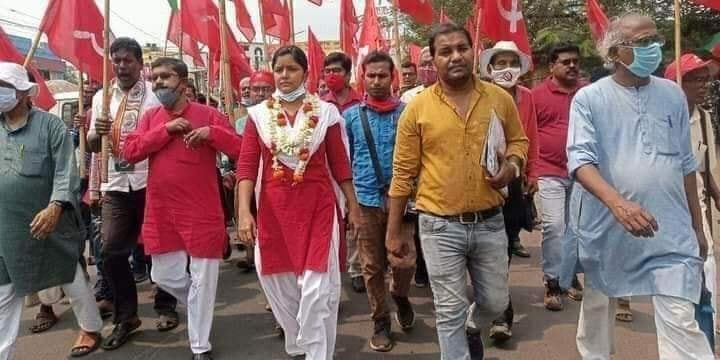 CPI(M) candidate in Nandigram Minakshi Mukherjee on her way to Haldia SDO office to file her nomination on Friday. Photo: Author provided

As individuals, Pritha Tah, 28, and Dipsita Dhar, 27, are studies in contrast. Pritha, contesting from Bardhaman South, is soft-spoken and composed; Dipsita, contesting from her hometown Bally (Howrah), firebrand and exuberant. Dipsita, who is a PhD scholar at JNU and all India joint secretary of the SFI, said as a student activist she will highlight the lack of employment opportunities in Bengal.

“There are hardly any job opportunities for the educated youth in Bengal. All my friends who have done BTech or Mtech, MPhil or PhD have been forced to leave the state for Bengaluru or Hyderabad. In the government sector, the job market is vitiated by corruption. TET/SSC exams have not been held for years. The Centre, on the other hand, is busy selling off public sector units. Where will the youth go? I have already begun campaigning and I am talking about these issues in particular,” Dhar said, speaking to The Wire.

Pritha, an SFI state committee member, is the daughter of former CPI(M) MLA Pradip Tah, who was allegedly murdered by Trinamool Congress goons in February 2012 in a row over a Left-backed general strike in the state.

“It is not about personal grief or hatred against the killer of Pradip Tah. It is about class hatred. Maidul Midya, a graduate who earned his living by driving an e-rickshaw, had come to Kolkata demanding jobs. He was murdered by state police. I am fighting for his daughters as much as for Rohith Vemula’s mother. In communism, one does not inherit any personal agenda, one inherits the will to fight against class oppression. I am no exception,” she said. 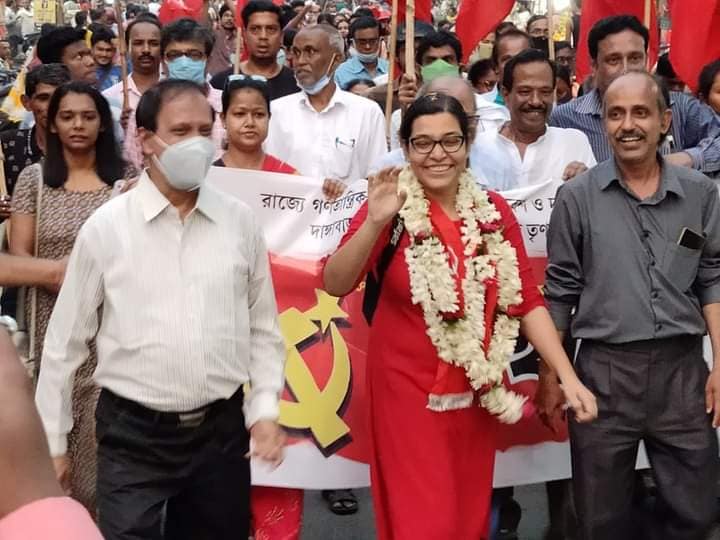 Among the other young leaders whom the CPI(M) has flung into the electoral arena, Srijan Bhattacharya, 27, and Monalisa Sinha, 37, are significant names. Within hours of his name being announced for the all-important Singur seat, Bhattacharya posted on Facebook, “Krishi amader bhitti, shilpo amader bhobishoyt. (Agriculture is our foundation, industry our future)”. It is enormously significant because this was the slogan coined by Buddhadeb Bhattacharjee, who had invited the Tatas to set up their Nano factory at Singur. The controversy over land acquisition and Mamata’s dogged opposition to the Tata factory played a huge part in the fall of the 34-year-old Left rule in Bengal in 2011. The Supreme Court in 2016 declared that land acquisition in Singur by the Left front government was illegal.

Also read: Is There a Lesson for Bengal CPI(M) to Learn From the Left Resurgence in Bihar?

What will he say to his voters about the Left Front’s Singur policy? “History has proven that Buddhadeb Bhattacharjee was right. At that point, the state had reached a saturation point in agriculture. In paddy cultivation, jute production, we were the No 1. Industrialisation was the next step forward. That day, Mamata Banerjee opposed industrialization for her political gains. Today the youth of the state is suffering for her actions,” Bhattacharya said.

“If I win, my responsibility will be to ensure industry returns to Singur,” he added.

While Monalisa will contest from the Sonarpur North seat, All India Student Federation president Shuvam Banerjee is the CPI candidate from Sonarpur South, on the southern limits of Kolkata. DYFI state secretary Sayandeep Mitra too is making his debut in electoral politics this time. Mitra, 38, a familiar face in political debates on TV channels, will take on one of the star candidates of the ruling party, Madan Mitra, at Kamarhati. Sonarpur, on the other hand, is a Trinamool stronghold. However, none of them is daunted by the task.

Almost all of these young leaders had worked tirelessly during the post-Amphan months in Bengal, when the dual disaster of covid-19-induced lockdown and the cyclone had rendered many people homeless and without food.

To assistant professor of political science at Presidency University Rajat Roy, the inclusion of youth in CPI(M)’s candidate list is a breath of fresh air. “Traditionally, CPI(M)’s politics has centred around land rights and peasants’ movements. But these young leaders have a much broader political perspective, in the sense that they are making issues like caste and gender relevant in Left politics. These were issues that the old guard would brush under the carpet. The new generation’s political idiom is bound to be more inclusive than the earlier one’s,” he said.

“We have plenty of young faces this time,” said Mamata Banerjee while announcing TMC’s candidate list. These young faces are mostly from the film and television industry. Sayoni Ghosh (Asansol South), Lovely Moitra (Sonarpur South), Sayantika Banerjee (Bankura) are all in their 30s, and are all familiar faces from the silver screen. Cricketer-turned-politician Manoj Tiwari is 37. Birbaha Hansda, a 38-year-old Santhali film actress and daughter of the founder of Jharkhand Party (Naren) Naren Hansda, is Trinamool’s candidate from Jhrargram.

It took many by surprise when Debangshu Bhattacharya, the most prominent young face of the Trinamool, did not make it to the candidate list. The 25-year-old civil engineer, who coined the party’s now famous slogan ‘Khela Hobe‘ is an excellent speaker and keen debater.

The BJP has announced candidates for the first two phases of elections. Ashok Dinda, the ex-cricketer, is a prominent young face on the list. The 36-year-old former fast bowler will contest from Moyna. Shintu Senapati, 34, and Pulak Kanti Guria, 39, BJP’s candidate from  Panskura West and Chandipur, are thoroughbred politicians who have risen in the ranks from the party’s Yuva Morcha. So is Nilanjan Adhikary, 41, who will be contesting from Nandakumar. All of these seats are in the Midnapore East district.

The CPIM(ML) Liberation’s spectacular success in the Bihar assembly election a couple of months ago was attributed to a large extent to its young candidates. Though their political presence is negligible in Bengal, party general secretary Dipankar Bhattacharya’s ‘lesser evil’ theory raised quite a storm in the state’s political circles.

Bhattacharya himself being a son of the soil, a section of traditional Left voters were interested in their choice of candidates.

Liberation has decided to fight in 12 assembly seats in the state. Its candidate in Phansidewa in Darjeeling district is 25-year-old tea-garden worker Sumanti Ekka. Sumanti’s father and grandfather had been active in politics; the latter having been involved in the Naxalbari uprising. At Uttarpara in Hooghly district, the party has fielded 29-year-old Sourav Roy, an All India Students’ Association leader.

Professor Roy believes that the overall rise of students activists in national politics is a result of concerted opposition to the BJP’s attempts to destroy liberal democratic academic spaces. “Before the farmers, it was the students all over the country who were taking the fight to the BJP.  The young politicians whom we are seeing now are mostly products of that political culture which became alive across educational campuses post 2014,” he pointed out.