In a letter welcoming the 21-day national lockdown, the Congress president said that her party stood united in with the Union government in its fight against the virus. 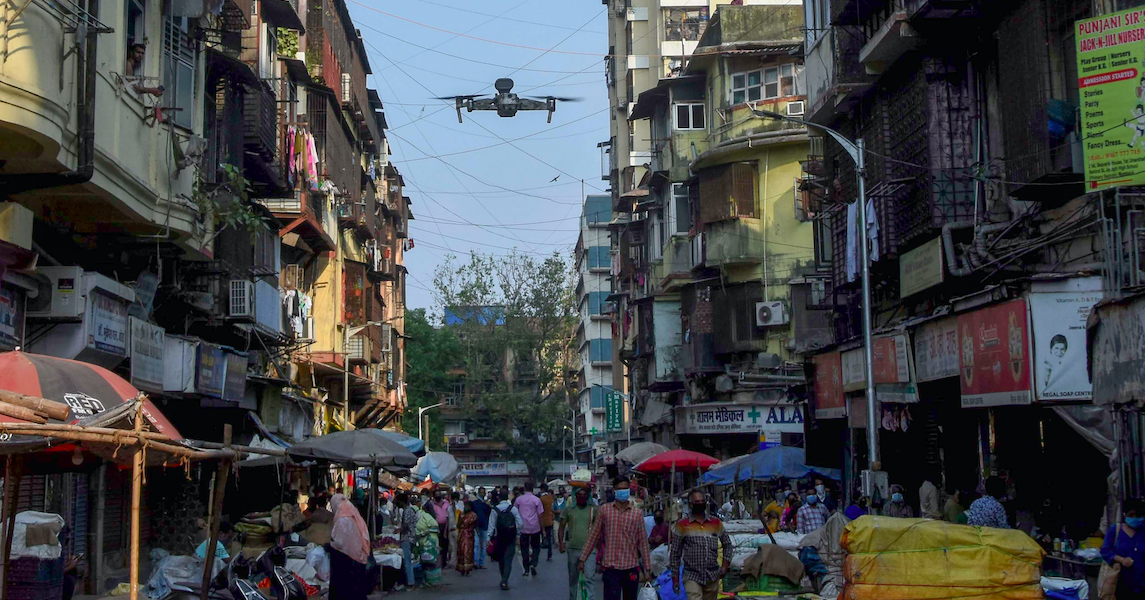 Police uses a drone to check peoples movement during a 21-day nationwide lockdown, a measure to prevent the spread of coronavirus, at a market in Mumbai, Thursday, March 26, 2020. Photo: PTI

New Delhi: On a day when Union finance minister Nirmala Sitharaman announced an economic package for the poor who will be damaged the most in India’s scramble against COVID-19, Congress president Sonia Gandhi urged Prime Minister Narendra Modi to implement the NYAY scheme that her party had proposed ahead of the Lok Sabha polls in 2019.

The Nyunatam Aaya Yojana (NYAY) or a minimum guarantee scheme for the poor, the Congress president felt, would be an immediate relief measure for the poor who have been struggling to access essential supplies and are suffering major income losses. Calling it “the need of the hour”, she said NYAY “will give them a basic economic resource to fall back on.”

While welcoming the prime minister’s call for a 21-day national lockdown, she said that her party stood united in with the Union government in its fight against the virus. However, she also mooted multiple concerns, all of which she felt needed to be immediately addressed.

She suggested that the first objective of the Rs 15,000-crore amount allocated by the government towards firming up the health infrastructure should be to equip “our doctors, nurses and health workers with ‘personal protection equipment’ including N-95 masks and hazmat suits.”

She also suggested the “opening and scaling up the manufacture and supply of these items” to protect frontline health workers and prevent any transmission of the virus through them. She also urged the government to announce a special “risk allowance” for health professionals.

“I believe we owe it to them to provide every protection and incentive we can,” she said. She said that the government should on an urgent basis clear the “uncertainty” over India’s preparedness to tackle the crisis, and asked it to launch “ a dedicated portal” to disseminate information about health facilities like “hospitals and their locations, number of beds, isolation chambers, ventilators, dedicated medical teams, medical supplies etc.”

In light of the unprecedented pressure on health systems even in developed countries, Gandhi suggested that the government could identify “geographical areas where the outbreak is expected to be concentrated in the near future” and open “temporary facilities with large numbers or ICUs and ventilators.”

Gandhi then spoke about concerns of vulnerable populations like “daily wagers, MGNREGA workers, factory labour, construction and unorganised workers, fishermen, farm labourers” who have suffered job and income losses. She advocated that the government could “immediately put in place broad based social protection measures including direct cash transfer to these sections to tide over the period of difficulty.”

One of the most important suggestions she made was regarding farmers. Several reports have suggested that the lockdown has harmed swift transport of farm produce like vegetables to the markets, as a result of which farmers stood to incur huge losses. This has also affected the supply chain of essential commodities.

“With nearly 60% of India’s population being economically dependent on agriculture, it is imperative that the Union government take necessary steps to enable harvesting and procurement of crops at MSP. This is also the right time to suspend all recoveries from farmers for a period of six months and to consider indebtedness relief liberally,” Gandhi recommended.

Although the Union finance minister announced that a sum of Rs 500 would be transferred to Jan Dhan accounts held by women for the next three months, Gandhi recommended that the government needs to do much more.

“Alternately, cash transfer of Rs.7,500/- to every ‘Jan Dhan’ Account Holder, ‘PM Kisan Yojna’ Account Holder, all old-age / widow / differently abled person’s Pension Account, MGNREGA worker’s accounts, as a one-time special measure to tide over the 21-Day lockdown period should be considered,” she said, adding that all ration card holders should also be given 10 kg of rice or wheat free of cost.

As a relief measure to the middle classes, she suggested that the government “might consider deferring all EMIs for a period of six months” and interests on the loans be waived off for this period. At the same time, she called for a “comprehensive sector-wise relief package” for micro, small and medium businesses, who too are facing an unprecedented distress.

“Mr. Prime Minister, if implemented, these measures will reaffirm our commitment to each and every one of our citizens when they most need support and protection. We in the Congress Party stand with the people of India at this time of national crisis and we extend to the government, our full support and cooperation,” she said.