Conversing With Gandhi in Digital India

We will have to implement truth and nonviolence in vastly different ways than how Gandhians did a century ago. 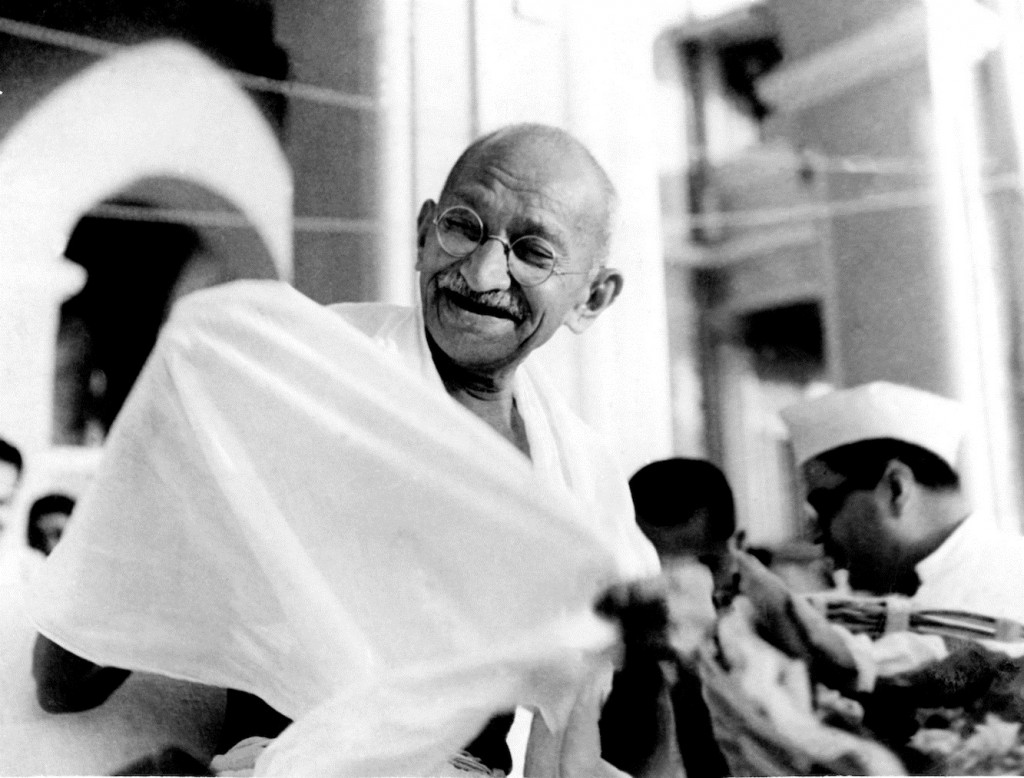 A common experience among adults is of revisiting movies seen or stories heard as kids and ending up with vastly different takes on them. Often the same happens with respect to historical personalities and events, though there’s one crucial difference. In most cases, views about history formed both during childhood and adulthood are not independent opinions but reflections of ‘processed’ information: information from textbooks, history teachers and parents in the former, and from friends, politicians and social media messages in the latter. Unless essential for further education — for example, as a history major — few consult original and/or robustly analysed material when it comes to historical personalities or events.

We also tend to reject nuances and, depending upon our prejudices, encourage only extreme opinions either profusely glorifying or satisfyingly denigrating historical persons. Most of us, with too much already demanding our attention and energies, do not care for the extra efforts (and compassion) required to arrive at more balanced opinions. For decades Mohandas Karamchand Gandhi has been on the receiving end of such failings of our society. Many popular views about him are bereft of nuances and riddled with misinformation and flawed reasonings. This is despite the fact that he’s left behind a great deal of self-written literature which potentially makes it easier to understand him. His autobiography, elegantly titled The Story of My Experiments with Truth, forms a significant part of that literature.

I read parts of it as a school kid and parts in my late teens. By my late 20s I had forgotten most of what I had read, although my admiration for Gandhi and for his zany commitment to truth and non-violence stayed. This December, after undergoing great mental anguish seeing the impact of a governmental decision on India’s underprivileged citizens – or on ‘Gandhi’s India’ – I decided to read him again, hoping to find some solace in his words.

It turned out to be a good decision. While what stood out reading Gandhi as a kid were incidents like his being ridiculed by colleagues when he chose to cut his hair himself or his being famously thrown out of a train at Pietermaritzburg, this time I found other more subtle details to marvel at and ponder over. I also understood better the reasons behind the passion of filmmaker Richard Attenborough, who worked crazily for years on his magnum opus Gandhi, a film which I have always admired and enjoyed watching.

In a documentary on the making of the movie, Attenborough expressed phenomenal admiration for one of young Gandhi’s most profound insights: “It has always been a mystery to me how men can feel themselves honored by the humiliation of their fellow-beings.” If I had to choose a single awesome sentence from among the dozens in the book, it would be this. Attenborough further confessed that he “still can’t say it without my hairs coming up at the back of my neck.” Today, with India’s prime minister himself encouraging abusive online trolls in subtle ways, this poignant mystery for the father of the nation has now turned into a painful reality for the children of the nation.

In the book, Gandhi mentions this insight with respect to the humiliation that ‘coolie’ Indians, including himself, suffered in white South Africa in the 1890s. But though the injustices and evils around him pained him and spurred him to act, they never made him furious or vengeful. Once when some white youths beat him up in Durban after hearing rumours that he had “indulged in unmerited condemnation of the Natal whites”, he refused to lodge a case and told the police that he did not hold the assailants to blame. “They were given to understand [by others] that I had made exaggerated statements about the whites in Natal. If they believed these reports, it is no wonder that they were enraged. I am sure that when the truth becomes known, they will be sorry for their conduct.”

This incredible capacity to “hate the sin and not the sinner” and to meticulously follow the precept that “man and his deed are two distinct things”, were perhaps the most distinct hallmarks of Gandhi’s way of dealing with people – from the poorest of individuals to the greatest of world leaders. I personally have very often hated “the sinner” and at times even humiliated them. Not physically, but – perhaps in keeping with the times – ‘digitally’. I remember being an angry guy in his mid-20s during the 2011 anti-corruption movement, posting furious messages on Facebook, and even questioning the intelligence and sincerity of those who opposed the Lokpal concept. I have since gradually realised that angry rants generally end up alienating people rather than winning them over or helping them warm up to an idea; and that whatever be the context, respectful language is the best policy.

So while I do frequently speak up against injustices around me, I now try to focus on the evil in the act or in the system and try not to demonise any person, however much they have fallen from grace in my eyes. It is difficult, but I am learning. I hardly find much difference between the moral and political corruption of, say, Narendra Modi and Arun Jaitley today, and of Sonia Gandhi and Suresh Kalmadi during the previous government; but I must confess I have used far angrier language for the latter individuals than for the former. For me this principle, of not letting anger against an action mess with one’s basic humanity towards fellow humans (whoever they be), has become a mantra of paramount importance. Fiction icons like Batman and Albus Dumbledore too, in many ways, follow a similar philosophy of non-violence.

There are many more instances where Gandhi displayed no anger towards those who abused him or beat him up. Strangely, one of the few contexts in which he uses the term ‘anger’ is while talking about the people who “made him a victim of their craze for his darshan”: “the darshanvalas’ blind love has often made me angry, and more often sore at heart”. In a digital India dominated by unquestioning and blind hero-worship, and by narcissism and megalomania, Gandhi’s condemnation of the “blind love” of his followers serves as a much-needed grandfatherly reprimand for millions of Indians and their self-obsessed leaders.

In general, Gandhi’s methods and their success show us that while it is exceedingly difficult to not feel angry, it would be more constructive if the anger were not translated promptly into words or action. Such zealous vengefulness, unfortunately, is another hallmark of digital India. Cyber assaults are worryingly common and often extremely vile, like those against Arun Shourie, against female journalists and against Mohammed Shami. Many liberal-minded folks also indulge in shaming those they think are ‘stupid’ or ‘brainless’, like the often insulting attacks of atheists on religious people. I try hard not to respond angrily to disrespectful and acerbic comments my writings occasionally receive. Though it is painful to see people sadistically enjoying throwing insults at others, it has been all the more deplorable to see the government of India and the party in power themselves indulging in such activities — perhaps conceiving these abuses right below the ubiquitous Gandhi photographs in government offices.

An important element of Gandhi’s autobiography is his candour regarding how his opinions changed and kept evolving with time and more information. This is especially significant in a world where labels like racist and sexist are attached to individuals, often permanently, at the drop of a statement. In the celebrated book Freedom At Midnight, the authors mention a wonderful anecdote: “One of Gandhi’s disciples once exclaimed to him in exasperation: ‘Gandhiji, I don’t understand you. How can you say one thing last week, and something quite different this week?’ ‘Ah,’ Gandhi replied, ‘because I have learned something [new] since last week.’”

Calling Gandhi a ‘racist’, as some critics do, ignores this flexibility of his (not to mention his immense humility, humanity, and compassion). The social context in today’s world is vastly different not only from Gandhi’s time, but even from our own parents’ time — most of whom too would be handed permanent racist and sexist labels if we were to apply our worryingly rigid standards to them. Maybe it is time we came up with more nuanced ways of addressing such actions and words of people from the past and from the generations before ours.

There was a period when Gandhi, the one freedom fighter who the British government most feared, used to think that the British Empire “existed for the welfare of the world”. He is thus a quintessential example of the maxim that people change and their views too change. In 2014, this maxim was an important reason why many citizens like me gave a huge opportunity, of heading and leading our nation, to another individual from Gujarat — optimistically hoping that his previously narrow and fallacious worldview had undergone a progressive metamorphosis. It unfortunately turned out that Modi’s mind is nowhere close to being as flexible as Gandhi’s, although he often tries to put himself alongside Gandhi. Nevertheless, while voting for Modi has been particularly painful for me personally, the maxim retains its significance. I believe it should always be applied to individuals, at least until we are indubitably certain that their worldview has become completely rigid.

A question that’s been asked almost every couple of years in post-Independence India is ‘What would Gandhi have done if he were present today?’ It misses the point though. When it comes to what we need to do to have a progressive and peaceful world around us, no complex mysteries are involved: the recipe is already out there and is insanely simple. Gandhi himself said that he had nothing new to teach the world: “Truth and nonviolence are as old as the hills.” With fake news and fake posts dominating India’s (and the world’s) media, instigating both verbal and physical violence on a consistent basis, Gandhi’s idea of sticking to those commonsensical ancient principles simply needs to be picked up by more and more of us, with urgency.

Besides, his genius lay not as much in coming up with revolutionary new principles as in inventing revolutionary applications of extant principles. Similarly, we will have to implement truth and nonviolence in vastly different ways than how Gandhians did a century back, remembering that “the difference between what we do and what we could do is sufficient to solve most of the world’s problems”.

Thus, for example, the difference between just lazily trusting the government, politicians and the media (what we do), and taking active efforts to read and hear multiple sides and arrive at more rational analyses (what we could do), could indeed be sufficient to solve many of the nation’s current problems. As for online abuse, to paraphrase digitally another ancient philosophy that Gandhi embodied, ‘if someone hits you on Facebook, turn your Twitter cheek to them too’.