Dirty Backstory to 'Swachch Bharat' Lynching: No Toilets, No Water and the Threat of Eviction

Zafar Hussein's family and neighbours say he had stood up to the nagar parishad's plan to get rid of the settlement where he lived and develop it into a posh colony. 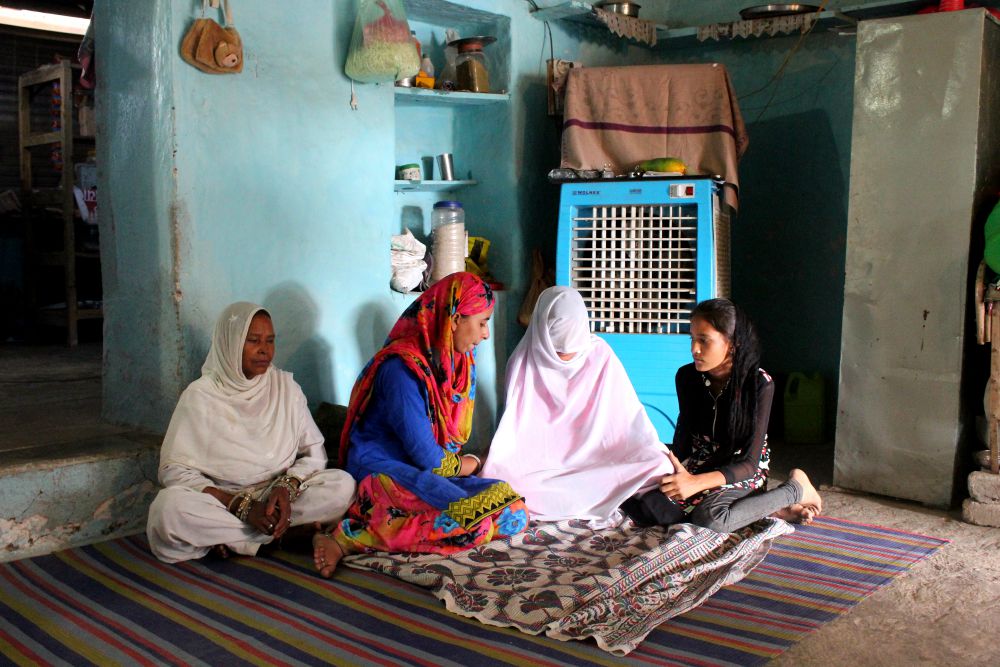 Bagwasa, Rajasthan: Whether Zafar Hussein, the Communist Party of India (Marxist-Leninist) leader who was beaten by state employees for objecting to them photographing women defecating outdoors, died of ‘natural causes’ as the government claims or was lynched to death as his neighbours and family members insist, one fact about the June 16 incident is indisputable: the women he stood up for, like most of the  other residents of the Bagwasa kuchi basti, have no option but to relieve themselves in the open.

Three years after it was launched with great fanfare and not so great funding, the Modi government’s Swachch Bharat Abhiyan has made little or no difference to the people here in one of the poorest pockets of Pratapgarh district.

The Bagwasa kachi basti, accommodating approximately 3,000 dwellings, is one of the oldest settlements in the district that forms part of the Udaipur division. The collectorate, built in 2013, is hardly a kilometre away from the settlement. Residents allege that local officials want to remove them and make a posh residential colony in the area.

Bhawar, an auto driver who lives in Pratapgarh, said that it was true that the authorities were looking to remove the settlement. “I don’t know for how long these poor people will be able to resist it.” 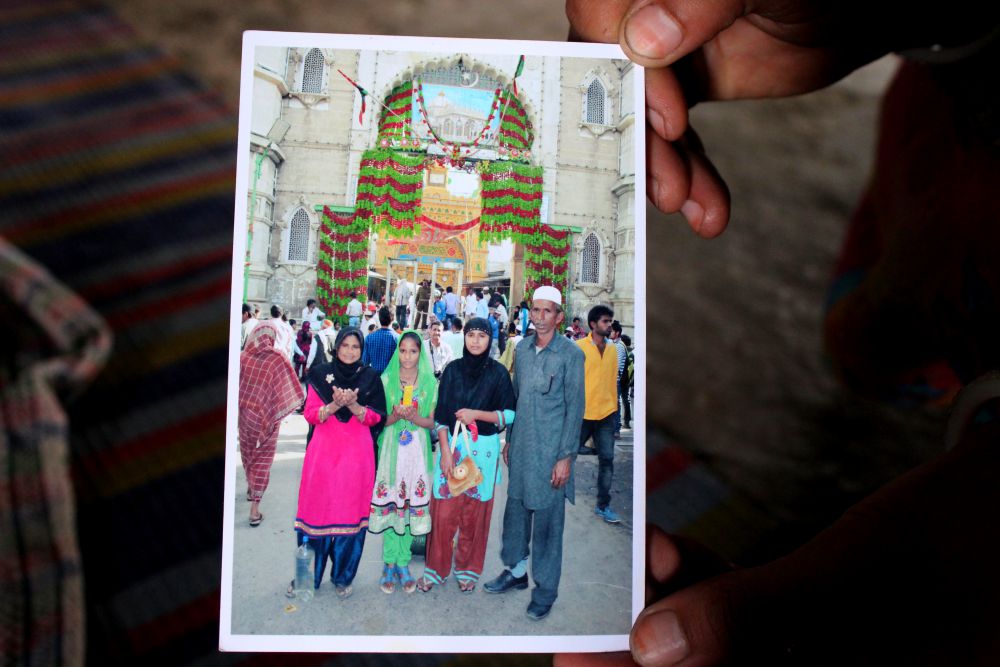 “It was a conspiracy to kill Zafar chachaji,” said Yasmeen, one of the women who said they were photographed by civic officials while defecating in the open. “Even after repeated threats from the officials to demolish our homes because we lack leases and toilets, chachaji wrote a memorandum to the nagar parishad protesting the public shaming of women who were forced to defecate in open in the absence of toilets at home. He even demanded money for construction of toilets at home.”

“We have deposited all the official documents required to attain the lease of a house in 2007 but the parishad hasn’t allotted leases to anyone in the basti till date,” said Rashida, 39, wife of Hussein.

“They make several excuses when we demand leases. I was told that my Jan Dhan account can’t be used and I need to open a new account in another bank,” said Ajab Khan, Hussein’s neighbour.

Events that led to the assault on Hussein

Shakeela, an eyewitness to the beating of Hussein, said that it was 6:30 in the morning when she and three others – Sumitra, Yasmeen and Shahida – went to relieve themselves at their usual place towards the back of the settlement. The women then “noticed that a bike and a car had stopped on the road just a few metres away.”

According to her, the commissioner, Ashok Jain, along with four more persons – Kamal, Ritesh, Vikas and Manish – came out of the car and instructed two men on bikes – Sunny and Tarun – to take pictures of the four women.

“On seeing them photographing us, we started shouting,” Shakeela said. “Hearing the noise, Zafar chachaji immediately came out and asked the officials to stop clicking pictures. Before we could intervene, the argument took the shape of a violent fight.”

Speaking to The Wire, Sabra, 14, Hussein’s daughter who was present at the scene along with her mother, alleged that Jain told his men, “Yeh roj roj ki pareshani hai, isko dekh lo aaj (He creates problem every day, teach him a lesson today).”

It was after this, she said, that Kamal, who works as a sweeper in the parishad, allegedly “threw a stone on [his] face and he started bleeding.”

“Manish and Vikash then began hitting his stomach and pushed him on the road. They didn’t let us intervene to save abba and said, ‘Tere baap ko jala denge, teri maa ka thobda todh denge, tujhe utha le jaenge (We’ll burn your father, break your mother’s skull and abduct you)’,” Sabra recalled. 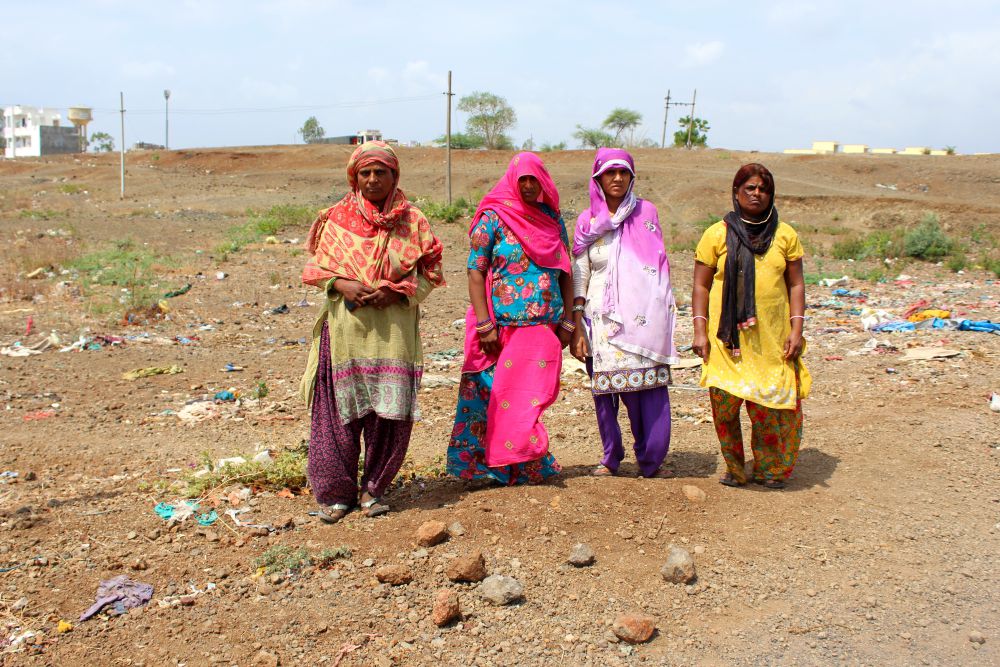 The four women who were photographed defecating show the spot where the June 16 lynching of Zafar Hussein took place. Credit: Shruti Jain

Raju, Hussein’s neighbour who was also present during the assault, said the officials ran away after they saw them coming. “Zafar died on the spot. When we took him to the district hospital in an auto, he was already dead,” he said.

Speaking to The Wire, Jain, the commissioner who has been named in the FIR by Hussain’s family, denied taking any “obscene pictures” of the women.”We were on our usual morning follow-up that day, which we have been doing since the last six months as a part of Swachh Bharat Abhiyan, to discourage people from defecating in the open and encourage use of toilets. We were not taking any obscene pictures of women in the basti. It is not in our sanskars to do so. I always ask my men to take pictures from a distance.”

Jain said that he and his staff were “peacefully conducting our work when Zafar came and started abusing us. I took him to the side and asked him to be calm and tell me his objection. His wife was also standing there. After the argument was over, he went inside and we left the place. There was no scuffle. We even had tea on our way later.”

Despite the FIR against four civic officials including Jain, for the alleged assault and killing of Hussein, no arrest has been made yet.

“We have not made any arrest so far as we are investigating the issue,” Mangi Lal Bishnoi, Pratapgarh SHO told The Wire. Death due to natural causes?

The post-mortem report now sent to Udaipur for further review shows that Hussein died due to a “cardio-respiratory failure” – in other words, ‘natural causes’. “The doctors are sold. They are hiding the truth. It was a clear murder. In the video [showing Zafar in an argument with the civic officials], one can see that he is perfectly fine. He died after he was brutally beaten up,” said Rashida, objecting to the report.

The family claims that the local media has falsely reported that they have accepted a cheque of Rs 2 lakh from the district collector. “We never accepted any cheque by anyone. We want justice for Zafar’s murder,” Hussein’s brother Zulfiqar told The Wire.

The residents of about 90% of the houses in the Bagwasa basti are forced to defecate in the open as the promised subsidy to build toilets (Rs 4,000 per household) has not been transferred to their accounts.

There is only one community toilet among 3,000 households in the settlement with ten commodes for both men and women but it lacks even the basic usable standards. The storage tank in the toilet is dry and the commodes don’t have any flushing facility. 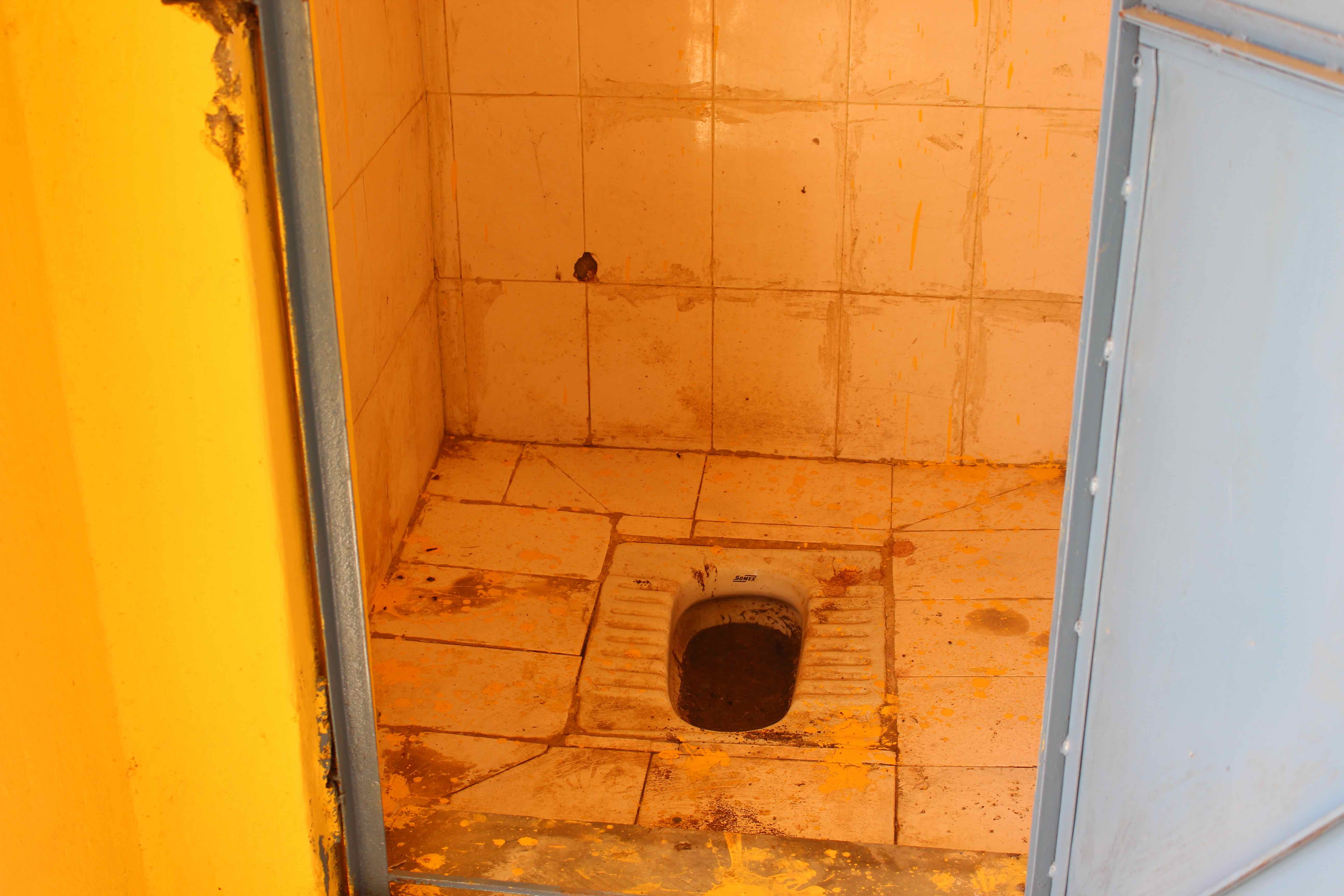 With no flushing system, the toilets at the sole ‘community toilet’ facility built by the government for the neighbourhood of 3000 people is unusable. Credit: Shruti Jain

“The toilet was recently painted by the civic body to show their fake consideration towards swacchta but it’s only an illusion. The toilets don’t have any flushing facility and that’s the reason why nobody from the basti goes there,” said Shahida.

Many of the residents have made kucha toilets so as to avoid defecation in open but the authorities object to those too. 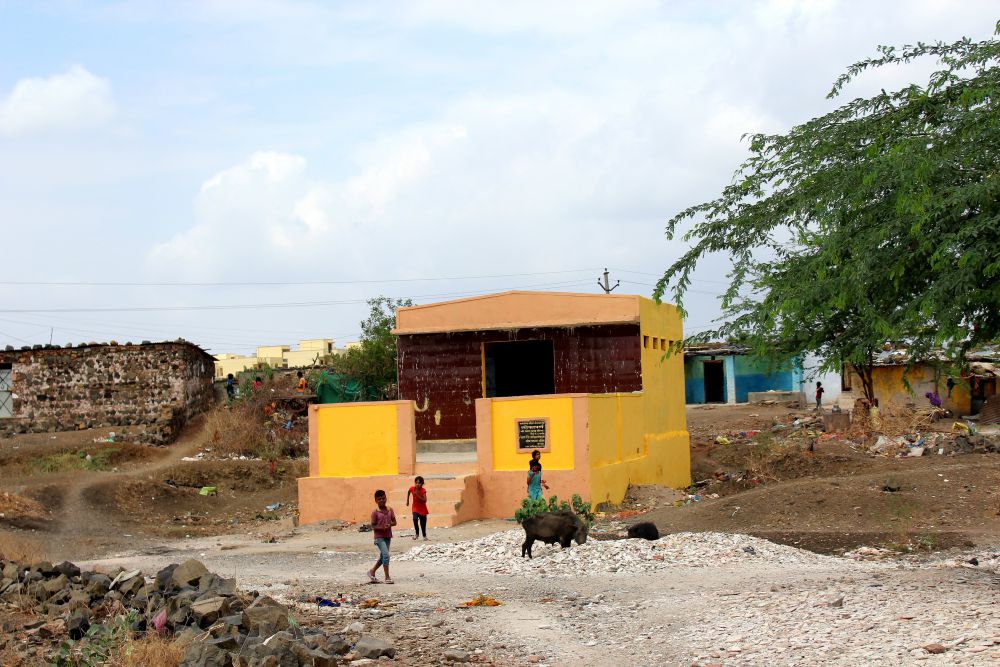 Kutcha toilet made by the basti residents in the absence of funds for constructing toilets. Credit: Shruti Jain

“I’ve written to the municipality several times to provide me money for constructing a toilet but they never listen and instead threaten to demolish my home,” said Shamim, a widow who lives in the Bagwasa basti with her five children.

In fact, the water crisis in the area is a major concern. In the absence of taps in the households, people arrange water from a pipe in the nearby water works. 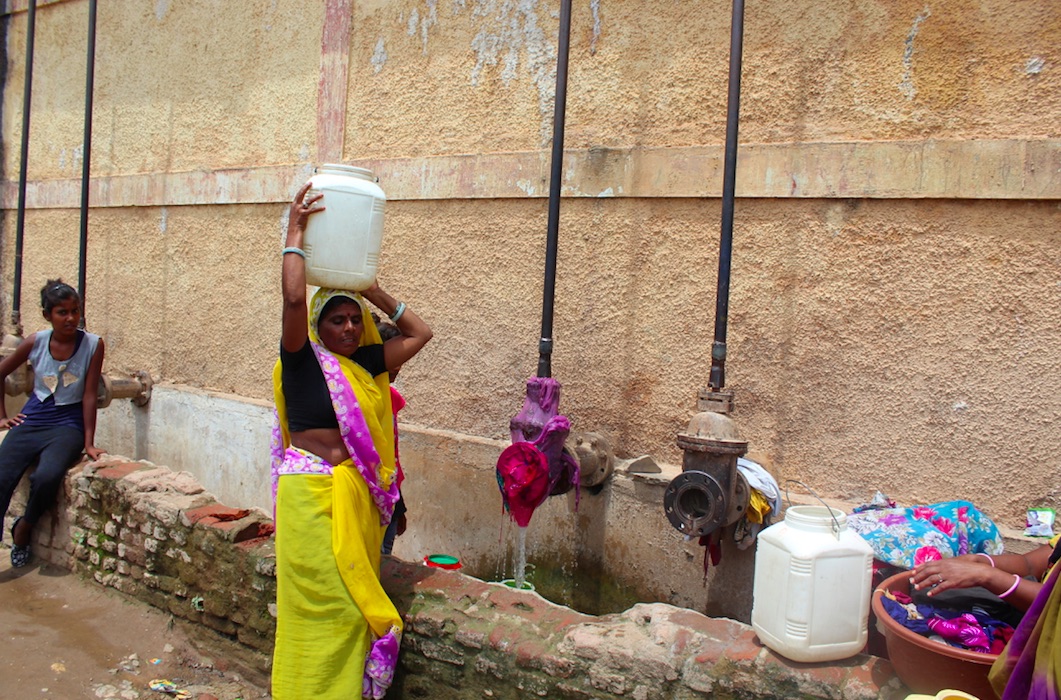 A leaking pipe at the local water works is the only source of water in the basti. Credit: Shruti Jain

“There is no water at home to drink and they want us to use toilets,” said Raju, who has been living in the settlement for the past 20 years.