With a Taste of Delhi’s Hostile Police Force, Has the Congress Party Finally Awoken?

The Delhi police's treatment of its top leaders could prove to be a wake up call for the party, which chose to remain largely silent during a series of attacks on civil liberties in the past few years. 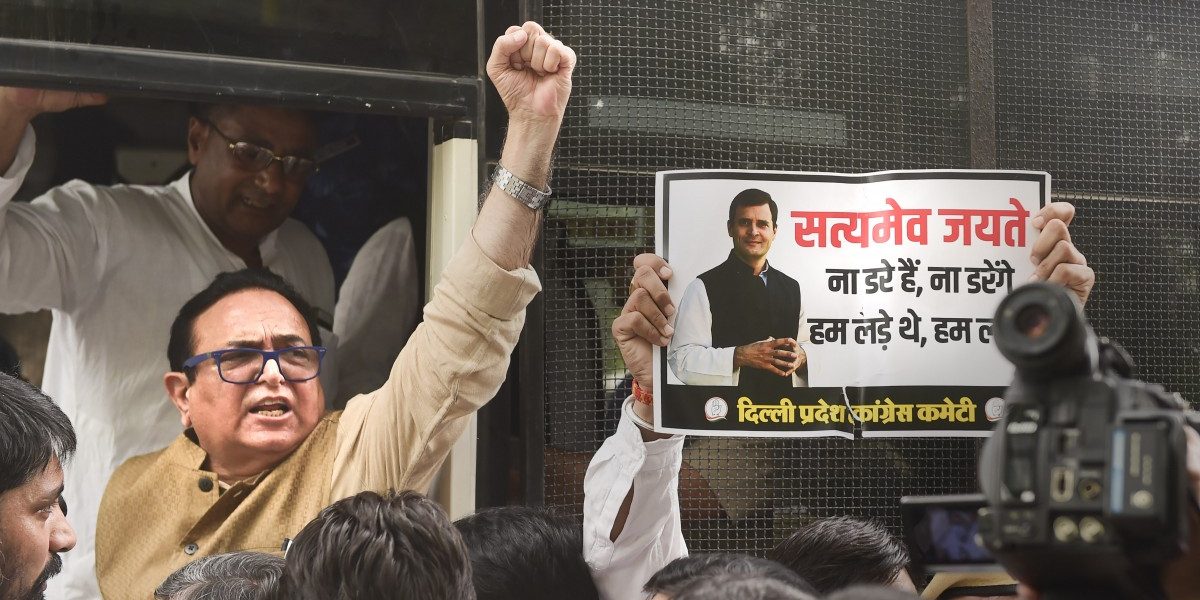 Congress activists being detained during a protest against summoning of party leader Rahul Gandhi in the National Herald case, near AICC office in New Delhi, Monday, June 13, 2022. Photo: PTI

New Delhi: As the Congress party continue to protest the Enforcement Directorate (ED)’s questioning of Rahul Gandhi for the third consecutive day, the party appeared to be much more organised than it has been over the past few years.

Be it protests against the human rights abuses by state governments led by the Bharatiya Janata Party (BJP) or the attacks on several opposition leaders, the Congress seemed to have never been able to mobilise its leadership to rally around such issues.

However, in the ED episode, the Congress has not only shown that it is still the biggest opposition party in the country but has also signalled clearly that it is not willing to hold back anymore.

During the recent Chintan Shivir at Udaipur, the Congress had declared its intention to organise district-level rallies in mid-June – exactly this time – as an outreach programme with a message of secular and constitutional nationalism while highlighting the broken promises of the Narendra Modi-led government. That did not take off.

Congress sources claimed that the sudden outbreak of COVID-19 among its top leadership – including party president Sonia Gandhi, her daughter Priyanka Gandhi-Vadra, and general secretary K.C. Venugopal – set things back for the party.

Over the last three days, however, Gandhi-Vadra was seen at the protests against the ED’s summons to Rahul Gandhi, and Venugopal was seen being pushed and dragged by the Delhi police officers in the agitations that top Congress leaders launched against the Modi government.

The Delhi police’s haughty action meted out to the primary opposition party, in fact, shows the manner in which the capital’s police force has behaved with most protests and agitations in the last few years. Once known as one of the most professional workforces, the Delhi police under the Amit Shah-led Union home ministry has given a similar treatment to students and dissenters during the anti-Citizenship Amendment Act (CAA) movement and several other such protests against a swell of human rights abuses against minorities and other marginalised groups.

The Delhi police have also been under civil society’s scrutiny for allegedly trying to implicate victims of the Delhi riots in false cases while letting off the apparent perpetrators of the communal violence with minimal action.

Also read: Delhi 2020 | the Real Conspiracy, Episode 1: What the Delhi Police Chose Not to See

Even though the Congress has criticised the Delhi police’s heavy-handedness in such cases, its responses have mostly been muted. In view of that, the treatment meted out to the Congress leaders in the last three days may have come as a reality check for the grand old party.

What the primary opposition party has had to face in the last three days at the hands of the police is somewhat unprecedented, indicating a near-complete erosion of autonomy of such security agencies.

While most Congress leaders were detained with force and many senior leaders were beaten up and kicked on the first two days of the protests, the party was up for yet another shock when Delhi police officers barged into the Congress headquarters without permission. The police visit appeared to be part of their usual intimidation tactics. But that the police could do so clearly indicates that the agency has political patronage. After all, the same Delhi police has functioned under the Congress-administered home ministry for years.

As they burst the doors open to the AICC HQ,they trampled upon the democracy our forefathers fought and gave their lives for.

BJP has truly killed Indian democracy. It doesn’t get darker than this. pic.twitter.com/PNQXOrngeB

This brings us to the larger political optics of such highhanded action of the police. Only days before, the Congress and other opposition had been at the forefront of cornering the Modi government over the international outrage against India following the BJP spokesperson Nupur Sharma’s disparaging remarks against Prophet Muhammad. The Modi government was forced to diplomatically manage a probable crisis because of the BJP’s political blunder.

The summoning of Rahul Gandhi by the ED and the brutal takedown of the party’s protests immediately after has the scope to deflect attention away from one of the rare situations where the Modi government has come across as nervous.

The action against Rahul Gandhi and the top Congress leaders, on the other hand, also goes on to show that the Union government’s authoritarian impulses are not merely directed against minorities but all those who will dissent in the future – that the bulldozer that has become symbolic of such instinct will spare none. Be it political parties, civil liberties activists, environmentalists, and all those who voice their criticism of the government’s policies and its majoritarian urges, all will be seen as what the UP chief minister Adityanath brands as upadravis (rowdies) and will be silenced through force.

At the moment, however, the Congress doesn’t seem to be taking such treatment lying down. Its chief spokesperson Randeep Surjewala has announced similar protests in all states in front of governors’ houses and in all district centres. He has also demanded a first information report against the officers who “trespassed” the AICC office in Delhi and called the state action “absolute goondaism”.

The summoning of Rahul Gandhi by the central probe agency has probably awakened the Congress party. It took direct action against the Gandhi family to bring the Congress leadership out of its slumber. The top leadership rallying around Rahul Gandhi indicates a distinct possibility that the Gandhi scion may as well be the most acceptable face as the Congress’s next president. The party may take some hope from the united action it has managed to mount in front of a hostile police force.