The Congress Still Has a Long Way to Go

Rahul Gandhi's speech at Berkeley has given the Congress a reason to cheer, but there's much to be done if it wants to capitalise on the growing dissatisfaction with the BJP. 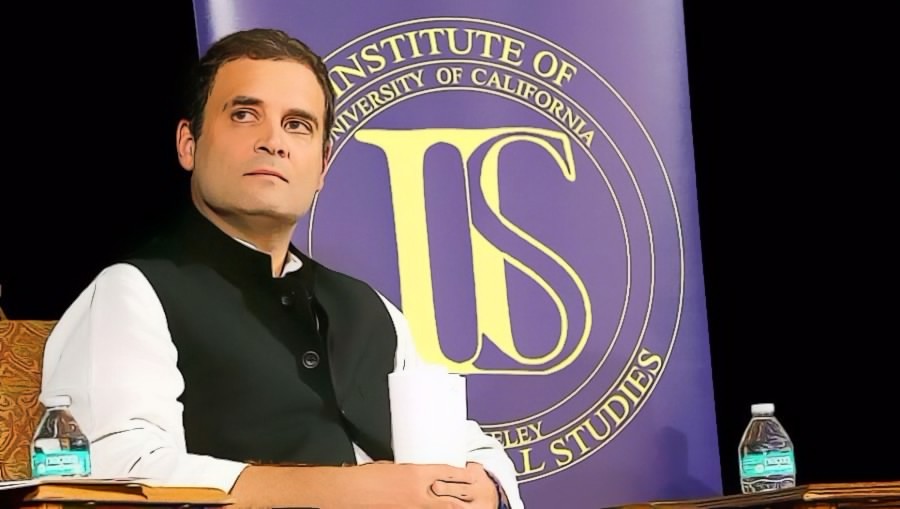 Going by reports coming in from the US, Congress vice president Rahul Gandhi is making quite an impression there, at least in academic, policy and journalistic circles. There has been none of that glitz and garishness of Prime Minister Narendra Modi’s 2014 trip, during which he addressed thousands of NRI devotees in Madison Square Garden, but Gandhi’s low key style, where he has spoken on policy issues, India and China, the social tensions in India and even on why dynasties are endemic in this country, seems to have impressed his audience. He even complimented Modi on his superior ‘communication skills.’

Some have said they were ‘surprised’ at his grasp of issues and his clarity. Why surprised? Because they had been led to believe, by what they had read in the media and heard on the grapevine, that he was a dud and little more than a good-looking scion of a big political family. Gandhi had an explanation for that: his political rivals – the BJP – had a large team of people working full time to create jokes and memes to rubbish him and create an image of a duffer. You hear me out and judge for yourself, he told his American listeners and apparently they did.

It is to be noted that Gandhi is not travelling with an entourage from the government-controlled media and neither are reporters from Indian television channels following him and reporting back home his every utterance. It is no secret that the Indian media does not give him a free ride and is borderline hostile to him. Yet, they have not been able to go after him this time round. The ferocious BJP reaction after his meeting in Berkeley, when ministers and senior party leaders came out in droves to attack him, was clearly an overreaction and seems to have not had much impact.

In Congress circles, there is much joy that their young leader is doing well in the US and is getting positive press in India. Ajay Maken was so excited that he attributed the victory of the National Students Union of India in the Delhi University Students Union election to Gandhi’s speech in Berkeley!

Also read: Is the Congress Crawling Out of Its Self-Imposed Shell?

But overwrought sycophancy aside, the Congress has some reason to be cheerful after a long time. The party had almost forgotten what good press looked like. And it comes at a time when the perception is fast gaining ground that there is growing dissatisfaction with the BJP. With the economy faltering, the negative effects of demonetisation becoming apparent, petrol prices at record highs and the lack of any tangible improvement in the citizen’s life, even the RSS is now said to be concerned. With the next general elections 20 months away and achche din now sounding like a cruel slogan left over from the heady days of 2014, the BJP’s leaders cannot but be looking for ways to please the voters.
The Congress sees this as an opening for itself. The promotion of Gandhi as a clever young man endorsed by global thought leaders is part of that strategy and will be deployed fully when – if? – he takes over the party in the next month or two. From then on, the grand old party will work towards improving its abject performance from 2014 and even look to coming back to power, with the help of like-minded coalition partners.

Why, there could be even dreams about Gandhi emerging as the unanimous leader of this group, in the absence of any other candidate, now that Nitish Kumar has crossed over to the BJP.

Any such fantasies, at least at this stage, could be dangerous and delusional. Forget getting the backing of the leaders of other parties – and as yet we don’t know who they will be – Gandhi first has to get the full support of his own party elders. Outwardly, many partymen seem to back him, but in private they complain about not knowing what is going on. Some of it is normal and happens in every party, but young Gandhi will have to fight and finish this negativity if he wants to rouse his troops (and especially officers) and turn them into an election machine that can compete with the BJP, which has now developed a sense of common purpose. The Congress has not only lost elections, it has also lost power when it seemed to be within its grasp after winning elections.

Also read: Is the Narendra Modi Bubble About to Burst?

Equally difficult will be to convince voters that the Congress has learnt from its failures and is prepared to make structural and systemic changes. UPA 2 was tainted with scams, though there is some recognition that many of its policies – that Modi has smoothly appropriated – were largely for the good. Even those who do not like the Congress acknowledge it has a better bench strength of high-quality talent than the BJP. But this may not, cannot, translate into mass votes. Anti-incumbency is not always translatable into pro-opposition. Besides, Modi’s personal appeal – including those famed communication skills – are a vote-catcher like nothing else.

For the Congress, resurgence can only come if it gets not just its own communication right. Over the next few months, the long-term effects of GST on small businessmen and the informal sector will become apparent. Can the Congress reach out to them? Will be the party be able to join the right partners and take a back seat where required? And how will it sell Gandhi to the skeptical masses. Berkeley may have been won, but the real battle will be in Bareilly, Baroda and Balasore.

This piece appeared in the Hindustan Times.