We Want to Fight BJP, Others Want to Build Their Party: Akhilesh Yadav on Congress

The Samajwadi Party leader took a dig at the Congress by saying that while SP and BSP were “fighting the election to stop the BJP, others were looking to use the election to build their party”. 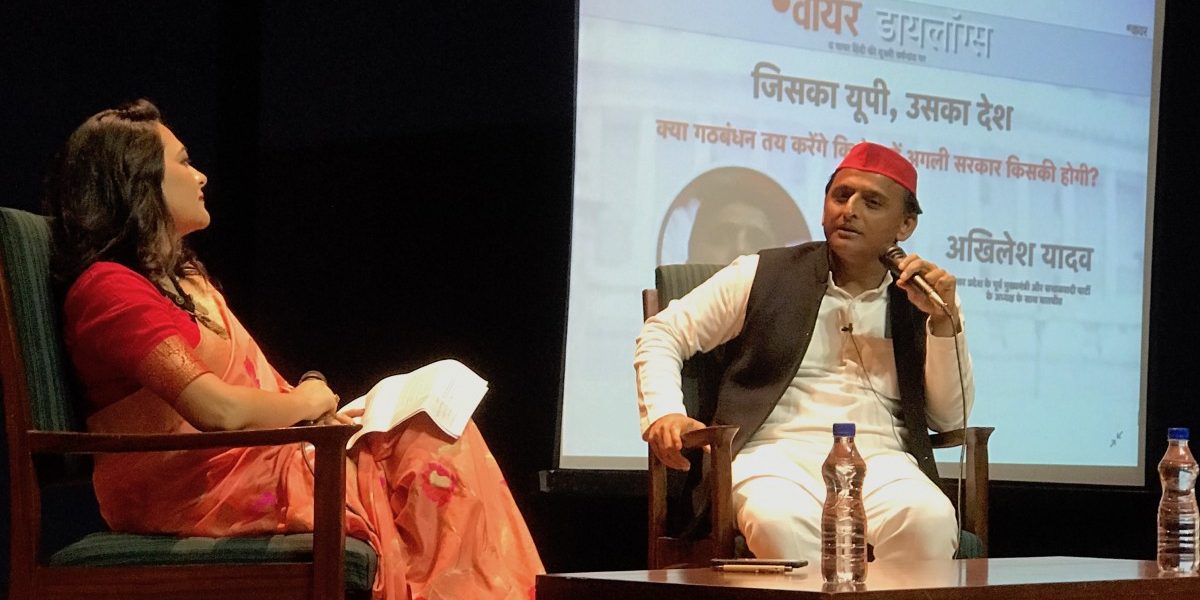 Arfa Khanum Sherwani and Akhilesh Yadav at The Wire Dialogues. Credit: The Wire

Speaking at The Wire Dialogues in New Delhi on February 7, he said that while the Bahujan Samaj Party (BSP), Samajwadi Party (SP) and Rashtriya Lok Dal (RLD) were “fighting the election to stop the BJP, others were looking to use the election to build their party.”

The former chief minister was in conversation with The Wire’s senior editor Arfa Khanum Sherwani at The Wire Dialogues, a public event organised here to mark the second anniversary of The Wire Hindi’s launch.

The three parties have forged an alliance for the general elections. While the SP and BSP will contest 37 seats each out of the 80 seats in Uttar Pradesh, RLD may contest three to four seats. The alliance has decided not to put up their candidates in Amethi and Rae Bareli constituencies, held by Rahul Gandhi and Sonia Gandhi respectively, effectively leaving them for the Congress.

However, the Congress – by appointing Priyanka Gandhi and Jyotiraditya Scindia as the general secretaries in-charge of the state – has indicated that the party will contest the polls in its full strength. It was thought that the entire opposition would unite to take on the BJP, which won a whopping 71 seats in 2014. However, the Congress’s decision has now created the possibility of a triangular contest that may eventually end up helping the BJP.

To a question why the two state-level parties did not bring the Congress on board, Yadav cleverly argued that the grand-old party was part of coalition as they were supporting the Congress candidates in two seats.

“Congress gathbandhan mein hai (Congress is a part of a coalition),” he said, adding, “We have left two seats for the party. UP has only 80 seats. If there were more, we could have thought of giving it more seats.”

When asked whether the Congress-SP alliance for the 2017 UP assembly elections – when the slogan “UP ke ladke” representing Yadav and Gandhi gained popularity – was the wrong decision on his part, the SP leader said, “Main aisa nahin samajhta. Maine aapko bola ki Congress ab bhi hamare saath hai (I don’t think like that. I told you that the Congress is still with us).”

“When Mamata Banerjee called a united opposition rally, all of us were together. The fact is that all the opposition parties are taking on the BJP in their respective states. In Bengal, it is Mamata Banerjee. In other states too, the main players have come together to contest the BJP,” he said, asserting the weight of SP and BSP over the Congress in UP.

He welcomed Priyanka Gandhi into politics. “Only when new people join, will politics change in the country,” he said.

On whether Priyanka Gandhi’s influence would hurt the prospects of the SP-BSP-RLD alliance, he said, “Woh toh janata tay karegi. Is baar ke chunaav, parties nahin lad rahi hai, janata lad rahi hai, BJP ke khilaaf. (That will be decided by people. This time parties are not fighting the elections, people are contesting to defeat the BJP).”

In a way, he avoided direct answers on the Congress but asserted that the opposition is united as far as resisting the BJP’s “autocratic” regime is concerned. “Vichaardhara ki ladaai hai is baar (It’s a battle of ideologies this time),” he said.

On whether he would accept Rahul Gandhi as the prime minister in a post-poll scenario, he said, “Waise toh main samajwadi hoon, magar sarkaar banane mein bhagayawadi hoon (Although I am a socialist, I believe in fortune when it comes to who will form the government),” he said, tongue firmly in cheek.

However, he categorically said that he was not in the prime ministerial race.

He said that the success of opposition alliances across the country can be seen from the fact that “BJP mein ab naye pradhan mantri ki khoj chal rahi hai (In the BJP, there is a search on for a new prime ministerial face).”

“Who would have thought a few years ago that there can be someone other than Modi for the prime minister… But you must ask [Nitin] Gadkariji, why is he making a new expressway that leads to Delhi,” Yadav said.