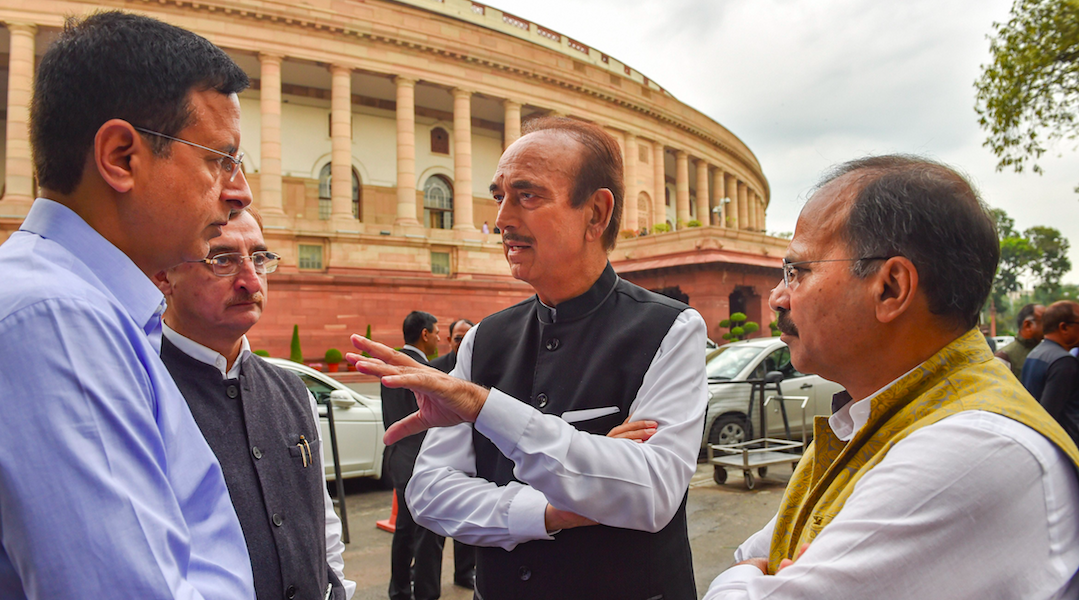 New Delhi: Lok Sabha on Thursday suspended seven Congress members for the remaining period of the Budget Session for “gross misconduct” and “utter disregard” for House rules after they allegedly snatched papers from the Speaker’s table.

Once a member is named by the Chair, he or she cannot attend the House for that day.

She said when the House was discussing the Mineral Laws (Amendment) Bill, 2020, some members “forcefully” snatched and tossed papers from the Speaker podium.

“Such unfortunate incident has possibly happened for the first time in the parliamentary history…I condemn this behaviour,” she said while naming the members.

Parliamentary Affairs Minister Prahlad Joshi then moved a motion to suspend the members from the House for the remaining period of the Budget Session.

The motion was passed by a voice vote amid protests by opposition members.

“…that this house having taken serious note of gross misconduct of these members’ utter disregard to the House and authority of the Chair and having been named by the Speaker resolve that these members be suspended from the service of the House from the remainder of the session,” he said.

Lekhi then asked the seven members to leave Lok Sabha chambers immediately and then adjourned the House for the day.

During this period too opposition members were in the Well.

Lok Sabha proceedings were adjourned four times on Thursday as Congress members demanded suspension of a Rajasthan MP over his controversial remarks against Congress President Sonia Gandhi and her family members.

As the House met at 2 pm, Congress members stormed into the Well demanding suspension of Hanuman Beniwal of the Rashtriya Loktantrik Party, a regional outfit from Rajasthan which is backed by the BJP, who made the remarks against the Gandhi family.

As Rama Devi, who was in the chair then, continued to run the proceedings of the House, Congress members intensified sloganeering saying, “Suspend the MP, Modi Sarkar shame shame’.

As the process of passing the Mineral Laws (Amendment) Bill, 2020, was underway, Gaurav Gogoi of the Congress was seen throwing papers kept on the Lok Sabha Speaker’s podium.

Soon after, Rama Devi adjourned the House till 3 pm.

The Congress on Thursday alleged that the suspension was a “dictatorial decision” by the government aimed at weakening the Opposition’s demand for a debate on Delhi riots in Parliament.

Congress’s leader in Lok Sabha Adhir Ranjan Chowdhury said it was a “government decision” and not one taken by the Speaker.

“We got to see spirit of revenge in the House. Order was given to suspend seven of our MPs for the session by a chairperson, not the Speaker,” he said.

He said the people will decide whether suspending seven members is right or not.

“We, Congress workers, are not afraid, (and) if you think by suspending our seven MPs, we will not demand a discussion about the Delhi riots, it will not happen,” Chowdhury said.

Describing the suspension as a “tale of embarrassment for parliamentary democracy”, he said the Opposition will not be weakened in its resolve and will continue to seek immediate discussion on Delhi riots.

Congress’s chief spokesperson Randeep Surjewala said it was a “black day” in the functioning of Parliament.

“This reflects utter dictatorship of the government as also complete failure of the Speaker in protecting the rights of the Members of Parliament in holding the government accountable to the law of this country as also to the Parliament,” he said.

“What were these MPs doing? They were only demanding a discussion on Delhi riots. They were questioning the role of the Home Minister or a deliberate conspiracy which is behind the Delhi riots,” he said.

Surjewala asked why can’t the government and the prime minister answer the questions raised by the Opposition over the Delhi riots.

“Modi ji, if your people can even get away with murder, but if we seek accountability we will be thrown out from remainder of the session of the Parliament,” he said.