As a strategy and as an ideology, the party’s public religiosity holds ruinous consequences for it and the country.

Those of us who thought that the Congress party president’s tour of 27 temples during the 2017 Gujarat election was a one-off tactic for the state’s distinctive politics, the year 2018 was a revelation – it showed how entrenched the Congress is in Hindutva.

In 2018, the Congress leader made temple tours a standard trope of election campaigns, and publicised his Hindu bona fides with a fortnight-long Kailash-Manasarovar pilgrimage. His party meanwhile promised to revive Vedic culture, build cow shelters in every village, and commercially produce cow urine if voted back to power in Madhya Pradesh and Rajasthan. Upping the ante, a ranking party member declared that only by a prime minister from the grand old party could get a Ram temple built in Ayodhya.

The Congress party however doesn’t see this as Hindutva politics; it considers this instead as espousal of Hinduism or, at the very least, as an electoral strategy to counter the BJP. The problem though is that both as a strategy and as a verity this mixing of religiosity and politics holds dire consequences for the party, the people, and the country.

Let’s take at face value the Congress party’s claim that what it does and what the BJP does are different – that it is “a party of Hinduism,” which is an open-minded, composite and humane outlook, whereas the majoritarian Hindutva doctrine of the BJP and its Sangh affiliates is thuggish and hate-filled. Even if accurate, this contrast is sketchy and vague because bigotry is just one aspect that sets apart the Hindu faith from Hindutva.

To many Hindus, an essential aspect of their faith is an intensely personal quest for truth and the meaning of life. To such Hindus, Hindutva is a public creed that bids them to hype and hail their faith – with grim outcomes for those who don’t – in ways that constrict the space for private spiritual quests.

Also read: Why Rahul Gandhi Is Right to Pit Hinduism Against Hindutva

To the Hindus who cherish the quiet reflective essence of their faith, the Congress now does the same with its own demonstrations of religiosity. By accentuating public religiosity, the Congress wittingly or unwittingly aids in the diminution of the unfussy private aspects of the Hindu faith and fosters the political doctrine it seeks to refute.

Public religiosity as a political strategy

That said is it still smart politics? Can the infusion of Hindu motifs into its politics help the Congress outsmart the BJP electorally (Some suggest it could, by allowing the party to shed its “pro-Muslim/anti-Hindu” image, and redefine secularism in terms of Hinduism’s inherent pluralism)?

Such politics may secure for the Congress more votes and seats in the coming elections, but will subsequently lead it to rout and ruin since the party won’t be able to control either the dynamics or the consequences of this strategy.

First, the dynamics of this strategy. The nature of competitive ethnic politics is such that the BJP could brand the Congress’ political move as gimmickry compared to its true Hindu nationalism, and the Congress will be compelled to greater displays of religious zeal. In just the past 12 months, the grand old party has gone from temple visits to commercial production of bovine urine. In this politics of one-upmanship, the expectation that the Congress could somehow draw a border between Hinduism and Hindutva and stick to its turf will be belied. The party will move further to the right of the political spectrum and echo the majoritarian doctrine, willy-nilly. 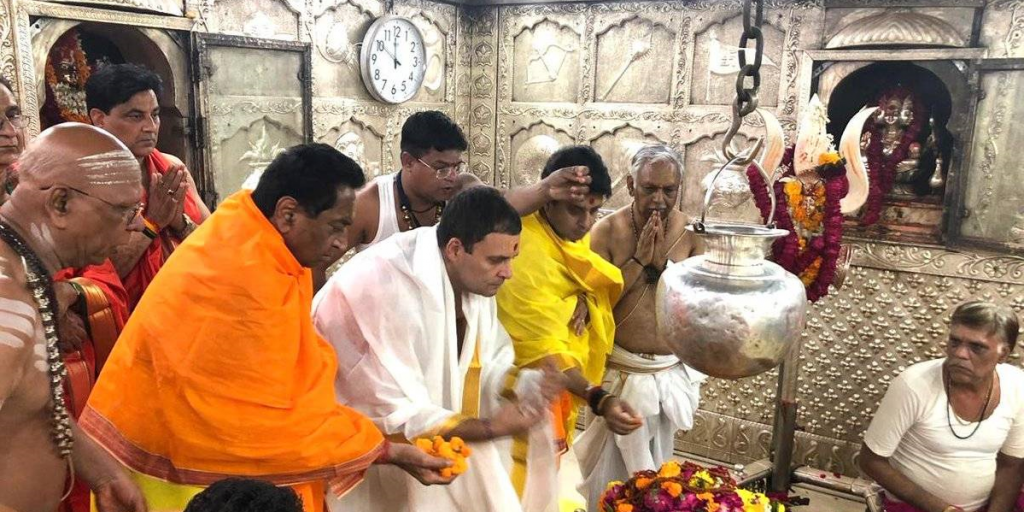 Second, the consequences of the strategy. The rightward shift to counter the BJP exposes the Congress to flanking attacks from the left. In multiparty states, the shift could disillusion its left-leaning voters, who over time would migrate to other parties with reliable anti-majoritarian politics. The emasculation of the Congress in multiparty states such as Bihar and Uttar Pradesh speaks to this political reality.

Even in two-party states, where the Congress directly faces off with the BJP, new parties could emerge from left field to undermine the Congress’ electoral base (Aam Aadmi Party’s rise in Delhi is instructive). Political vacuum created on the left by the Congress’s rightward shift would catalyse such rebalancing, and the Congress will get squashed.

Rather than smart politics, the Congress party’s religious plank would thus be suicidal. And the risks in this politics are not just for the Congress; they could blight the whole polity, including the BJP.

Over the past few years, the balance within the BJP has shifted to the right as its moderate leaders have either left or decided to not contest elections. By heightening the political salience of religiosity, the Congress inadvertently plays into the hands of the hardliners within the BJP, and fuels that party’s slide into extremism.

In a polity, where two of the largest parties vie to establish Hindu credentials, the public sphere – when not ferocious – would be surfeit of stereotypical symbolism (renaming towns and train stations, building cowsheds, temples, statues, etc.) with scant concern for people’s material welfare even as their private spiritual lives lay in ruins.

Smart politics is for the Congress to recognise the dangers of its religious politics, and how it has over the past year turned into an unwitting accomplice advancing the ideological goals of its rival. Smarter still would be for the party in 2019 to script and control a political narrative that is to its advantage.

In BJP’s unmet electoral promises and unrealised reforms, the Congress should readily find that narrative – an economic one. And, among the disenchantment millions – of youth, farmers, and middle-class urbanites, as well as assorted castes – that narrative would unmistakably reverberate.

Anoop Sadanandan is the author of Why Democracy Deepens, and tweets at @SadanandanAnoop.