Chhattisgarh chief minister Bhupesh Baghel also said that an SIT will be formed to probe the 2013 Jheeram Valley Naxal attack in which senior Congress leaders were killed.

New Delhi: Hours after being sworn in, Chhattisgarh chief minister Bhupesh Baghel and Madhya Pradesh chief minister Kamal Nath on Monday announced that their governments will waive short-term agricultural loans for farmers, fulfilling a promise made by the Congress ahead of the just concluded state assembly polls.

Short-term agriculture loans to the tune of over Rs 6,100 crore of over 16.65 lakh farmers drawn from cooperative banks and Chhattisgarh Gramin Banks, as on November 30, 2018, will be completely waived, he said.

Baghel was addressing a press conference after chairing the first cabinet meeting of the newly-formed Congress government in the state.

In addition, loans of farmers borrowed from commercial banks will also be waived after proper examination, he said.

Fulfilling another pre-poll promise, the cabinet decided to hike the minimum support price (MSP) of paddy to Rs 2,500 per quintal, he said.

Another important decision taken by the cabinet was that a Special Investigation Team will be formed to probe the 2013 Jheeram Valley Naxal attack in Bastar district, where 29 people, including senior Congress leaders, were killed, he added.

“The family of the victims of this incident are yet to get justice,” Times of India quoted Baghel as saying. Then Congress Pradesh Committee chief Nandkumar Patel, former Union minister Vidya Charan Shukla and former legislator Uday Mudaluiyar were among the victims of the attack.

After being elected, Baghel told Hindustan Times that waiving farmers’ loans was his first priority. He also said that his government would devise a new policy to deal with left-wing extremism. “The Maoist menace is a politico-economic problem and which could not be eradicated by security forces. If we deal with it as a law and order problem, it can expand further. We have to create trust among the tribals of Bastar. We have to talk to them.”

Congress president Rahul Gandhi had promised a farm loan waiver within 10 days of his party coming to power in the state, where it ended the 15-year-long BJP rule.

Addressing reporters at the state secretariat after taking charge as new chief minister, Nath said, “After taking oath, I have cleared the first file related to writing off loans up to Rs two lakh.”

After Nath signed the relevant file, Rajesh Rajora, principal secretary, Farmers’ Welfare and Agriculture Development Department, issued an order in this regard.

“The Madhya Pradesh government has taken a decision to write off short-term crop loan of eligible farmers up to the limit of Rs two lakh, as on March 31, 2018, from nationalised and cooperative banks,” the order stated. 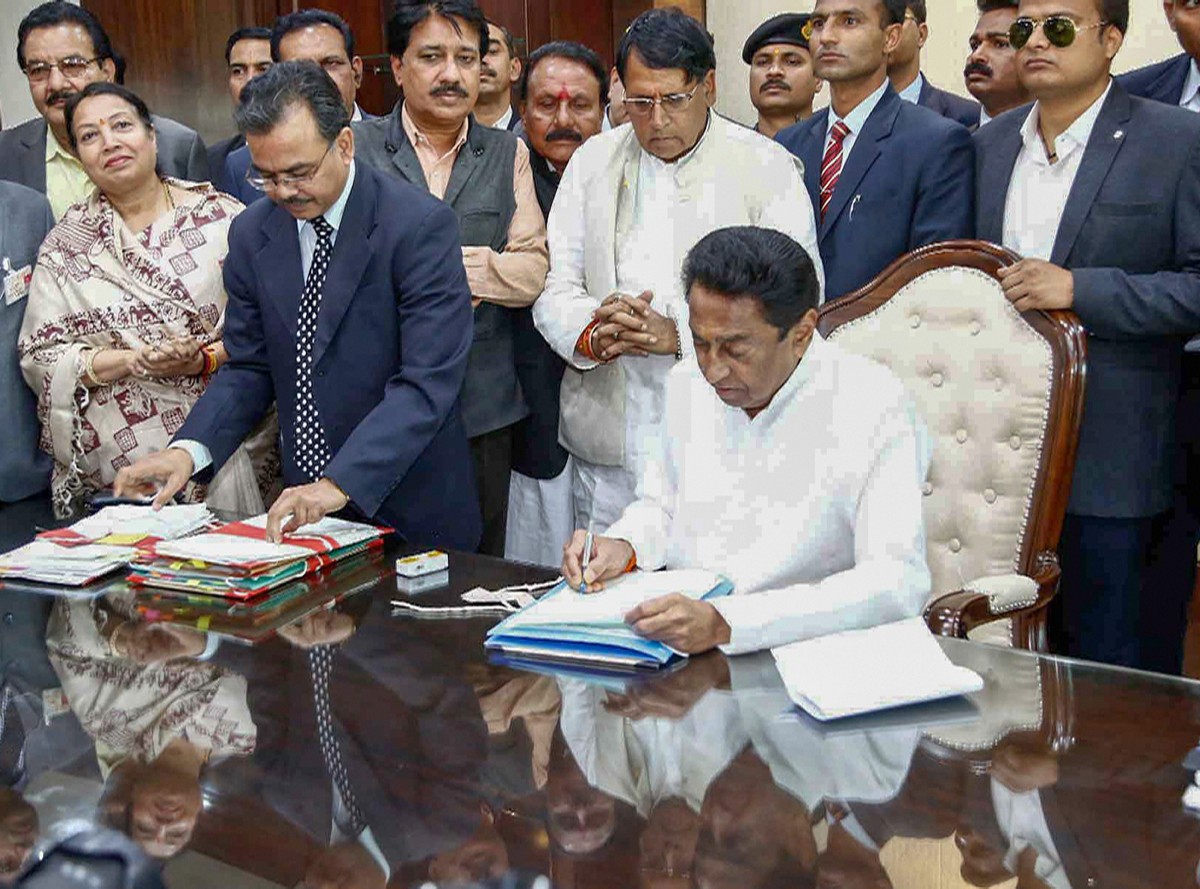 Rajora said an estimated 34 lakh farmers will benefit from the loan waiver whose size he pegged between Rs 35,000 crore to Rs 38,000 crore.

Income tax payers and government employees are not eligible for loan waiver, the senior bureaucrat said.

Justifying his decision to waive farm loans, Nath asked that when nationalised banks can write off 40-50% of loans of big industrialists, why can’t cultivators get the same relief.

Addressing a public rally on June 7 at Pipliya Mandi in Mandsaur district, Gandhi had announced his party would waive farm loans after coming to power in the state.

“Here Kamal Nath (MP Congress president) and Jyotiraditya Scindia (the state Congress poll campaign committee chairman) are sitting. The day the Congress comes to power in MP, count 10 days, I say with guarantee that farmer loans will be waived within 10 days. It won’t take even the eleventh day,” Gandhi had said at the rally.

Later, this announcement was included in the Congress manifesto, titled ‘Vachan Patra’.

After Nath announced the waiver and before Baghel did, Rahul Gandhi tweeted: