State-level Congress leaders must learn to work together without running to the high command to create 'unity'. They have to save Nehruvian ideas and ideals from the pronounced infirmities of Nehru’s family. 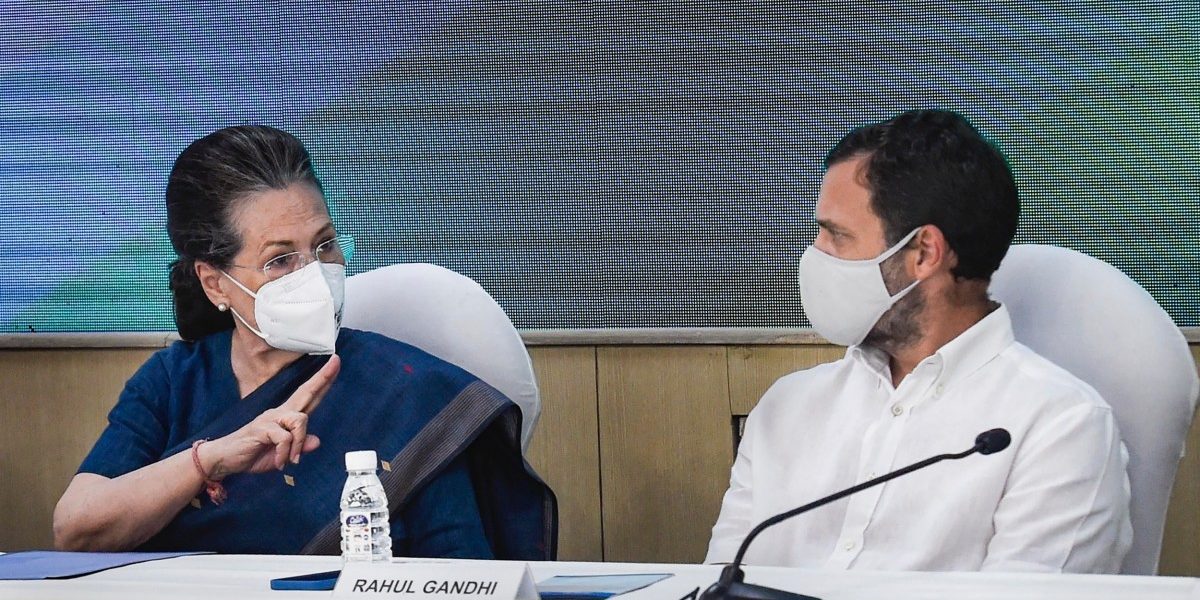 It was perhaps an unintended coincidence that the Congress Working Committee should have reaffirmed its faith in the leadership of Sonia Gandhi on the very day she completed 24 years of unchallenged sway over the party of the independence struggle and national consolidation. But it was also a cruel coincidence. While these 24 years have seen many developments, some good and some not so good, the unmissable theme has to be the gradual de-institutionalisation of the office of the Congress president. The process appeared totally and irreversibly complete when on Sunday she spoke in the CWC of the “three of us” – referring to herself, her son and her daughter.

It was on March 14, 1998 that Congress leaders of all persuasions and temperaments allowed themselves to get sucked into an open conspiracy to dislodge an elected party president and install Sonia Gandhi as Congress chief. All the honourable men and some women – Pranab Mukherjee, Sharad Pawar, Natwar Singh, Arjun Singh, Shiv Raj Patil, Jitendra Prasad, Rajesh Pilot, Madhavrao Scindia, Narain Dutt Tiwari, Moshina Kidwai and Manmohan Singh – lent their name and respectability to a handful of intriguers who were out to restore the Congress to the Nehru-Gandhi family.

On that day, the Congress party entered into a kind of Faustian bargain with political ramifications so deep that they continue to resonate both inside the party and outside. The Family as the Dogma was consecrated. And the Congress felt revived.

Since then, it has been a transactional relationship; Sonia Gandhi lent her family’s name and its legacy to enable Congressmen to work out a modus vivendi among themselves. She was deeply uninterested in the politics of ideas or conviction; she was shrewd enough to recognise the power of cant and happy to let Congressmen chant familiar mantras about the Family. On their part, the Congressmen were happy to acknowledge her titular leadership as long as they were allowed their space. She came a cropper in the 1999 Lok Sabha elections when pitted against Atal Bihari Vajpayee, a man of the masses, a man of eloquence and a man of certain ideological pretensions. But the Congressmen had surrendered their right to question the Family and its presumed dynastic magic.

It was only in 2004 that Gandhi re-jigged her game exponentially when she declined the prime ministerial crown. This move yielded massive moral capital, a rare commodity in Indian politics. The Family’s political bank balance was replenished; but in the euphoria of her ‘sacrifice’, no one could object to the unobtrusive induction of Rahul Gandhi as ‘the boy who will be king’.

The year 2009 found the Family in an unusually piquant situation: for the first time since Jawaharlal Nehru succeeded Motilal Nehru at the Lahore session of the Congress, the Family found itself batting for someone else – Manmohan Singh – to become the prime minister of India. That the Congress could cross the 200-seat mark in the Lok Sabha was heady stuff; the Family thought it was entitled to feast on a heavy diet of hubris and arrogance. The son-in-law began appearing in the frame. Rahul was regularly serenaded as ‘the prime minister in waiting’.

As the party approached 2014, Sonia’s moral lustre had all but faded away as she was now increasingly behaving like a typical Indian matriarch – promoting an undeserving, unexciting and unwilling son as the karta of the not-so-undivided Congress Family.

Despite two un-glorious defeats – in 2014 and 2019 – on Rahul’s watch, Congressmen do not know how to get around the Family.

A certain spuriousness hangs over the CWC. Mounting evidence screams in the Congressmen’s ears that the Gandhis are no longer equal to the task of providing either momentum or direction, and certainly not an edge, to the Congress in the new context that has changed so dramatically. Yet, no one at the CWC meeting wanted to wound the already bleeding Gandhis; and the Gandhi clan could not summon the clarity of purpose or nobility of intent to gracefully call it quits.

A brutal reality blankly stares Congressmen in the face: the Gandhis will not walk away and the Congressmen do not know how to oust them. This deadly stalemate will continue to eat into what remains of

Equally brutal is the fact that the Congress’s constitution endows its president with extraordinary powers and that authority is now at the service of Rahul and his clique; the Gandhis will see to it that no one will inflict a ‘March 14, 1998’ on them.

No less brutal is the fact that factionalism is now second nature to the Congressmen. Over the years, state Congress leaders – capable, experienced, wise, educated, in touch with the masses – have allowed themselves to be reduced to supplicants, intriguers in the Family durbar. In the process, each one of them demeans himself or herself.

The dilemma is simple: how to minimise the Gandhis’ capacity to hollow out the Congress and its self-defined task of safe-guarding the ‘Idea of India’. Perhaps the only way forward would be a kind of revolution from below. It must be realised and internalised that the Congress is still a much more enduring brand than the three Gandhis.

Watch: ‘All 3 Gandhis Must Immediately Retire From Politics for India’s Good’: Ramachandra Guha

The G23 constituents need to see through the Family control trick – divide and rule, factionalise each state unit, make regional leaders bleed each other, weaken and degrade one another so that all of them appeal to the high command to play third umpire. It is this trick that enables the Family to become the anchor of so-called ‘unity’ in the party.

The Congressmen now need to find ways of making the Family-as-High-Command irrelevant. First, they will have to learn to work together in the states – accommodate each other’s egos and ambitions and families, share power and patronage. For example, the Congress lost power in Madhya Pradesh because its various leaders could not devise an entente cordiale.

Second, state-level leaders should not wait for inspiration or guidance from Rahul Gandhi. In each state, leaders on their own should find ways to respond to regional grievances and anxieties, and formulate a regional narrative in local idioms.

Third, do not let Narendra Modi invoke Rahul to bamboozle the Congress any more. For example, only if Congress leaders in Gujarat find ways of working as a team without direction from Rahul can then they stand a chance of making the BJP pay for its sins of omission and commission these past 20 years. Otherwise, Narendra Modi and Amit Shah will blindside the Congress with the Family’s inadequacies.

Only when the party’s state-level leaders learn to work together can they hope to rescue Nehruvian ideas and ideals from the pronounced infirmities of Nehru’s family. The choice for most Congressmen is simple: make the Gandhis irrelevant or become an irrelevant voice as the Hindutva crowd disfigures our republic beyond recognition.