While the Congress may be trying out new techniques and ideas, its resolve to promote its own brand of Indian politics has come back to the fore. 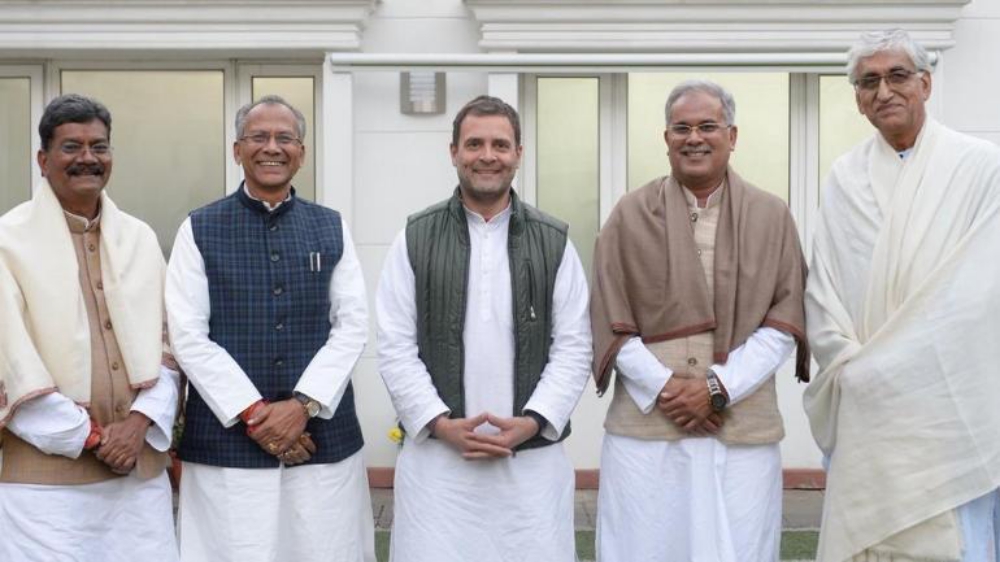 According to one estimate, more than 47% of all Lok Sabha aspirants of the Congress party from Madhya Pradesh are dynasts.

This may be close to 100% in Chhattisgarh.

With the return of Congress in both states in the recently concluded assembly elections, Congress has quickly gone back to its old ways, abandoning any vestige of embarrassment at being labelled a dynastic party or a party of the old Jagirdari system.

Of the original 40 seats of undivided Madhya Pradesh, 11 now fall in Chhattisgarh – which experiences three rounds of polling on April 11, 18 and 23. Therefore, the first list of the Congress is out for the state. These are for five reserved seats – four of them for STs. The first list itself is an eye opener.

The preponderance of dynasties in Chhattisgarh

Ravi Bhardwaj, son of former MP and PCC president Parasram Bhradwaj, is being fielded from Janjgir-Champa (SC) seat. Parasram was a seven-time Congress MP from the same seat and a Shukla loyalist – who was made the PCC president by them to rein in Digvijaya Singh during the 1990s.

Laljeet Singh Rathia, a sitting MLA from Dharamjaigarh, has been given the ticket from Raigarh (ST). His father, Chaneshram Rathiya, was a minister in Digvijaya Singh’s cabinet in the 1990s and an eight-time MLA.

The third ticket has gone to Biresh Thakur from Kanker (ST). Biresh, a member of the Zila Panchayat on a Congress ticket, comes from a longer line of dynasts. His father, Satyanarain Singh Thakur, and grandfather, Ratan Singh Thakur, have all been MLAs.

Dipak Baij, again a sitting MLA from Chitrakote, got the fourth ticket and the final ticket has goes to veteran Khelsai Singh who has been a four-time MLA and three-time MP from Surguja.

Also read: In Chhattisgarh, Probes Into Sins of Previous Regime Run Into Trouble

It does not end here. Of the remaining six seats in the general category, almost all aspirants are dynasts.

Bhawani Shankar Shukla (28) wants to become a fourth generation lawmaker from Mahasamund after his father Amitesh, grandfather Shyamacharan and great-grandfather Ravishankar Shukla. His claim to the Mahasamund seat is based on the fact that his grand-uncle – Vidya Charan – held the seat for seven terms. Other examples of such unabashed self-promotion are rarer in Indian politics, which is filled with families extending their grips over power and capturing a seat for eternity – win or lose. Vidyacharan had lost thrice and Amitesh – who represents the Rajim assembly segment of the same Lok Sabha – has lost twice but never failed to get the Congress ticket.

Similarly from Durg, sitting Congress MP and now a minister in the state, Tamradhwaj Sahu, wants the Congress ticket for his son Jitendra.

From Korba, assembly Speaker Charandas Mahant is seeking a nomination for his wife Jyotsna – a political greenhorn who comes from another long line of Congress satraps. Charan’s father Bisahudas was a five-term Congress MLA and when he passed away suddenly, Arjun Singh made Charan resign from his government job as Tehsildar at the age of 25 and gave him the Congress ticket in 1980.

That leaves Bilaspur and Rajnandgaon from where, again, two women candidates want to try their luck based on their family ties. Vani Rao’s father Ashok Rao and his father were Congress legislators, and Vani herself has been the mayor of Bilaspur.

Rajnandgaon is even more interesting as Congress wants to give the ticket to Karuna Shukla – an imported dynast from the BJP. She is the niece of former prime minister Atal Bihari Vajpayee. She herself is interested in a Rajya Sabha nomination though.

Raipur may be the only seat which may eventually beat the dynastic rule of the Congress as no clear claimant from any established dynasty has come forward so far, mainly because it’s a Kurmi dominated seat and there are no Kurmi dynasts in the Congress. Though they have inducted former Janata Dal union minister Purushottam Kaushik’s son recently. The Kurmi dynasty of the future may emanate from the present chief minister’s bungalow.

Also read: As Elections Approach, How Will BJP, Opposition Play Their Hands?

What is it about the Congress party and dynasties?

There are several theories, but the two most potent and pragmatic are the following:

While he in turn derives his power from the superior power, it’s his responsibility to keep his flock together. The Mughal ruler is not bothered about how the laity behaves or what it wants, so long as the zamindar successfully collects the crowds, sings his praises and generally acts servile.

2. It’s a question of access. Most people who may be inclined towards the Congress do not have access to fortified system that 24 Akbar or 10 Janpath has built around itself. There is very little chance of new faces breaking in unless it’s a time of duress and the old zamindars have deserted – which they frequently do in search of securer fastening and a leader who may help them keep their small fiefdom.

The courtiers around the Gandhis are well serviced by the dynasts,  leaving very little need to promote new faces. In fact, most of them are most insecure with newer faces and newer ideas entering the sanctum sanctorum. And, if god forbid they somehow do, they come together to block access in such manifest ways that the new entrant finally becomes Hemanta Biswa Sharma of the tussle-with-Gogoi fame.

While the Congress may be trying out new techniques and ideas – coining new slogans on Twitter and engaging in social media battles – everyone in the system knows that its life blood runs from dynasties. As it wins a few skirmishes, the resolve to promote its own brand of Indian politics comes back to the fore, and that’s where the BJP scores at the national level.

At the state level, the BJP knows it cannot fight regional dynasts. While it now has many of its own, it keeps projecting a Vajpayee or a Modi who is free of the dynastic burden. It’s not going to be any different this time; Chhattisgarh is only the worst or best example of it.