A bike rally during the Ram Navami procession in Kolkata in 2018. Credit: Shome Basu

This is the first article of a three-part series.

Almost four weeks have gone by since the Congress suffered its second crushing defeat at the hands of the BJP, but Rahul Gandhi, still the titular head of the party, has yet to break his silence. So far, only one of its senior leaders, Veerappa Moilly, has had the courage to tell him what every member of the party knows: that every day of silence is strengthening the impression that he has thrown in the towel and bowed out of politics altogether.

For a party that has severely discouraged the development of collective leadership and relied ever more heavily on the fading charisma of the Nehru-Gandhi dynasty to woo voters, this is the kiss of death. Rahul Gandhi may have been a reluctant Congress president. But he did accept the responsibility that goes with the position. So, however disappointed he may be, he has a duty not to destroy the party along with himself.

The challenge he faces is a Promethean one. It is to transform a once-dominant party that has been fighting only rearguard actions to prevent a further erosion of power for the past four decades, into one that admits that it has nothing more to lose and go back on the offensive again.

To do this, he has to infuse the Congress party with a renewed commitment to the nation that Mahatma Gandhi, Nehru, Sardar Patel and Maulana Azad had set out to build. This was an India free from religious and caste prejudice, in which people belonging to more than a score of ethno-linguistic nationalities could live as equals and prosper. Only if the Congress succeeds in rediscovering the idealism of its early days will it succeed in harnessing the idealism of youth to the freedom fathers’ idea of India once again.

The first step on this road must be to formally repudiate its policy of “soft Hindutva”. Soft Hindutva is the descendant of ‘soft secularism’, a policy of continual appeasement that the party adopted in the 1980s when it began to lose its dominant party status within Indian democracy. The turning point was its opening of the locks on the Babri Masjid in 1985, followed by its overruling of the Supreme court on the triple talaq issue in 1985.

Since then, it has made one compromise after the other till it lost its moral standing with the people. Thus, it allowed Tasleema Nasreen to be chased out of India by Muslim bigots after she had fled to India in search of safety from the bigots of Bangladesh; banned Salman Rushdie’s Satanic Verses; allowed Gujarat to ban Joseph Lelyveld’s book on Mahatma Gandhi; allowed  the removal of A.K. Ramanujam’s study of the Ramayana from the Delhi university Syllabus, and banned Chicago scholar Wendy Doniger’s book on Hinduism altogether. Most shamefully, it did not lift a finger to enable M.F. Husain, the great artist who was chased out of India by the goons of the Vishwa Hindu Parishad for daring, as a Muslim, to paint images of scantily clad gods and goddesses, to return to his beloved India even to die here.

After its defeat in 2014, the Congress’s soft secularism has degenerated further into soft Hindutva. This  reached its nadir when the party began to highlight Rahul Gandhi entering temples, praying and emerging with a teeka on his forehead before the Gujarat elections. Automated calls began asking subscribers, “Don’t you know that Rahul Gandhi is a Janeu-dhari Hindu(i.e. a Brahmin)?”

Also Read: Does Rahul Gandhi Only Believe in the Hinduism of the Upper Castes?

Soft Hindutva has not only further marginalised the already besieged secular elements in the country, but also legitimised the Sangh’s ‘hard’ Hindutva. This is abundantly clear from Narendra Modi’s brazen claim to the legacy of Swami Vivekananda; his appropriation of Sardar Patel for the RSS without a murmur of protest from the Congress, and the outrageous claim to the legacy of Mahatma Gandhi he made on Gandhi Jayanti last year. Both Rahul and Sonia Gandhi attended the function, but instead of walking out in protest, they sat silently while Modi took away India’s proudest legacy. It was as if, for them, Mahatma Gandhi’s assassination by Nathuram Godse was an accident of history: the act of a single deranged fanatic like Gavrilo Princip’s at Sarajevo in 1914, and that the carnage at Ahmedabad in 2002 never happened.

The Congress needs a long period of introspection on its own past errors, before it can even hope to make a comeback. If there is a single “good” outcome it can take away from its defeat, it is the realisation that there is no middle ground in the battle of ideas that lies ahead. To combat the poison of Hindutva, the Congress needs to stop parroting imported words like secularism and pluralism, both of which have  clichés, and rediscover the guiding philosophy that has underpinned the practice of all religions in India over the past two-and-a-half millennia. This is ‘Dharma’.

Dharma is the original faith of Vedic India. There is no reference in the Vedas to Hindu Dharma, because the word Hindu was brought to India from Persia more than a millennium later, ironically, by the Muslims. Dharma was not a religion in the modern, contentious, sense of the word because the Messianic religions that now dominate discourses on religion had yet to be born. Dharma defined the right way of living: it prescribed how people needed to relate to each other and to the wider world around them.

The Rig veda differentiates between different forms of dharma, such as prathama Dharma, Raj Dharma and Swadharma. But every one of these centers around the concept of human Duty, which was “to Uphold, to Support, to Nourish”. Dharma is what became Karma Yoga in Hinduism during the classical period.

“Dharma” was the word  Gautama Buddha used to describe his sermons on the four noble truths and the eight-fold path. Western students of comparative religion, have done Buddhism a disservice by presenting it as a new religion, because this has made it one among several religions, including the three Messianic religions, Judaism, Christianity and Islam.

Buddha’s use of the Vedic term suggests that he considered himself to be a social reformer and not a prophet. What he had rebelled against was the corruption of Dharma, and the growth of Adharma. These were  caused by self-absorption, avarice, expensive and impoverishing ritual, and Brahminical control. Buddhism was, in fact, the first great recorded rebellion against organised religion in human history. 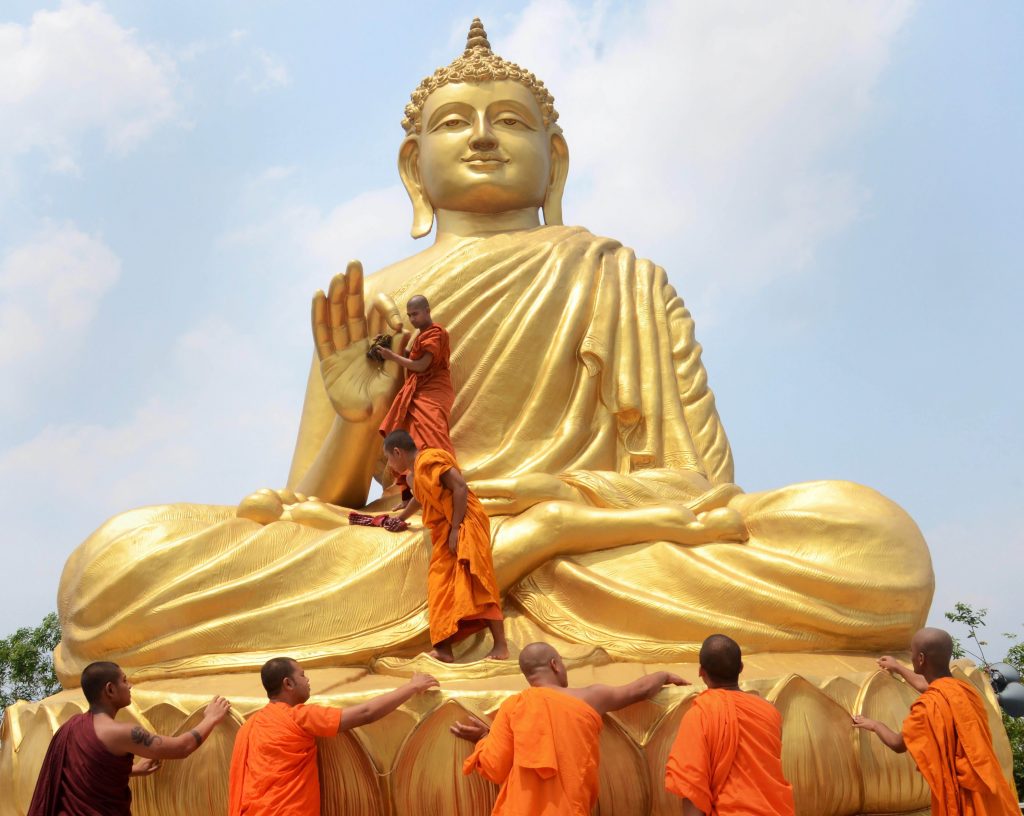 Buddha’s use of the Vedic term suggests that he considered himself to be a social reformer and not a prophet. Photo: PTI

Describing Buddhism as one of several prophetic religions has obscured a critical difference between Hinduism, Buddhism and other mystical religions, and the Messianic ones. This is that Messianic religions have to be professed. Belonging to one of them requires a profession of faith in it and a repudiation of other faiths. It is a surrender of oneself to the ‘true’ God, whose reward is the possibility of gaining absolution for one’s sins through repentance, in this life.

Dharma, by contrast, has to be lived. Only virtue in this life can gain the soul freedom from the chain of rebirth. It requires no profession of faith, no submission to a single prophet. And it offers no easy absolution from sin. It is the Hindu way of referring to Buddhism, as Bauddha Dharma, and the remark that Hindus frequently make even today – “yeh mera Dharma hai” – that capture its essence.