The government has reached out to separatist leaders for help in restoring clam, a request the Hurriyat says it can do nothing about since the government itself says they are a 'threat to peace'. 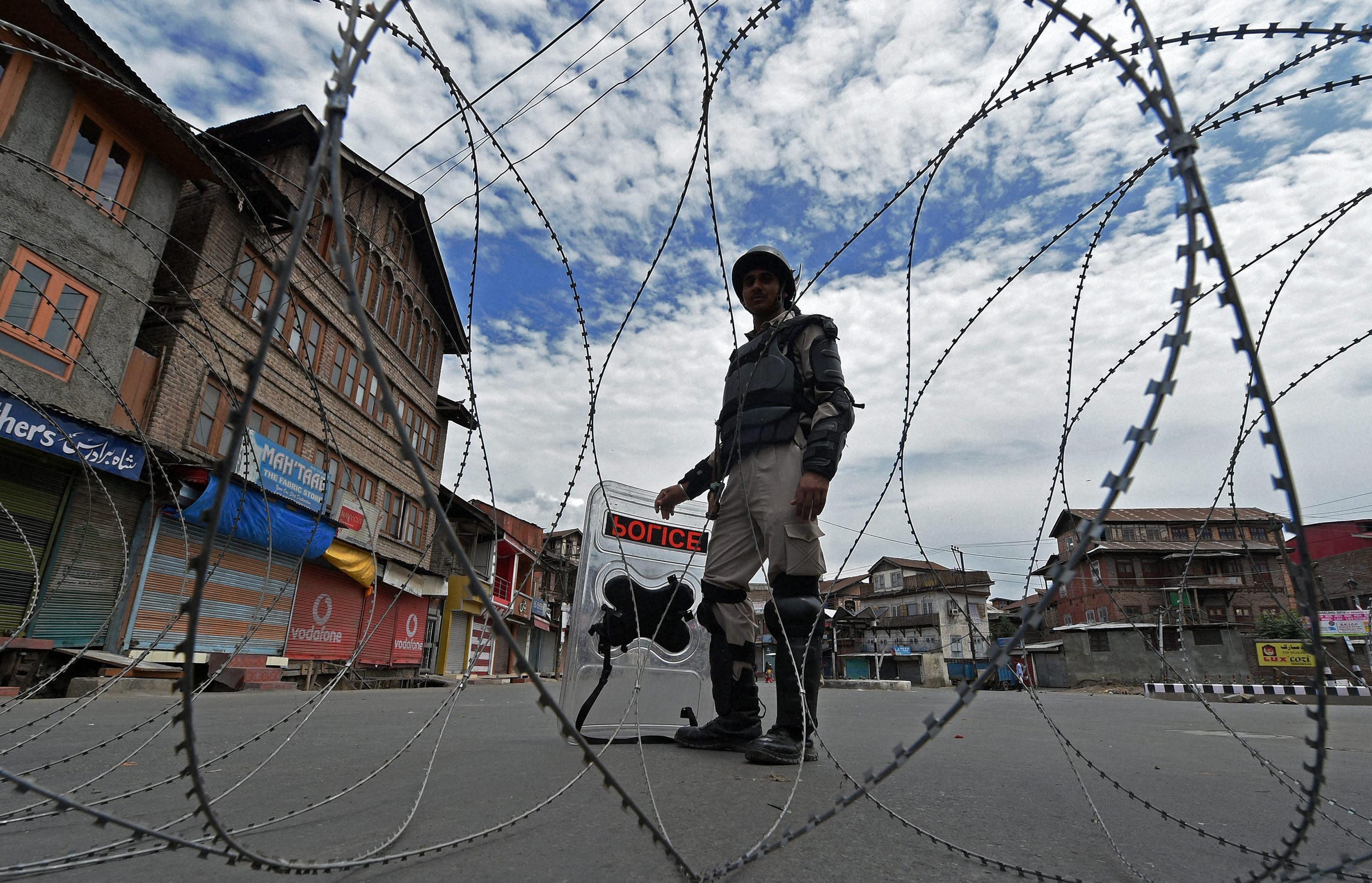 Security personnel guard a deserted street during the curfew that has been imposed in different parts of the city following the killing of Hizbul Mujahideen commander Burhan Muzaffar Wani along with his two associates. Credit: PTI Security personnel guard a deserted street during the curfew that has been imposed in different parts of the city following the killing of Hizbul Mujahideen commander Burhan Muzaffar Wani along with his two associates. Credit: PTI

Srinagar: With an official report on Monday putting at 30 the number of civilians shot dead in Kashmir by the security forces in the wake of the July 8 killing of Hizbul Mujahideen commander Burhan Muzaffar Wani, a jittery state government appealed to both separatist and opposition leaders to help restore peace in the Valley.

13-year-old student Asif Ahmad of Zainapora in Shopian district was among a fresh list of nine people compiled by the government who had died since Saturday – the day Burhan was buried in his home town of Tral in Pulwama – but had gone unreported due to a communication breakdown and strict curfew in parts of south Kashmir and Srinagar. And in more trouble for the government, more than 20 civilians were injured, seven of them “critically” on Monday in fresh firing by the security forces on protesters at separate places in Bijbehera, Shopian and Ladiyar Tral amid reports of  attacks on police posts and CRPF camps.

Though strict curfew was in place for the third straight day in parts of the Valley, people in south and central Kashmir defied restrictions and took to the roads as the region continued to slip into a fresh cycle of unrest – a reminder of the 2008 and 2010 summer agitations in Kashmir in which over 180 civilians were killed.

A senior doctor at Srinagar’s SMHS hospital told The Wire that over 150 civilians, including 30 cases of bullet injuries – four of them critical, were undergoing treatment. The injured also include 80 persons who have received a “grave” injury in one of their eyes.

“At least 40 patients with eye injury are at a stage with very minimal chances of them recovering  eyesight,” said a senior ophthalmologist at the hospital, asking not to be named.

One policeman also died on Sunday when protestors pushed a police mobile bunker vehicle into the Jhelum in south Kashmir.

Amid growing criticism against the police and paramilitaries for targeting protestors above the waist, the government said security personnel were compelled to retaliate owing to attacks on police stations and army camps.

“The mobs set ablaze so many police stations and police vehicles and tried to overrun security forces camps at various places… If you see the footage, small kids who do not know [what is going on] have stones in their hands. I urge the youth not to take protests to a level where the forces are forced to use their weapons in retaliation,” said government spokesman and senior minister Naeem Akthar.

He briefed the media about the situation in the Valley after chief minister Mehbooba Mufti hurriedly summoned her cabinet on Sunday to review the situation following which she asked all political forces to support the restoration of normalcy in the region.

“If they want the steps taken for saving lives and restoring peace to succeed, we need their support,” said Akhtar while asking the police and other security forces to “exercise restraint” to prevent loss of life as “any fatal retaliatory action only leads to a vicious cycle of death and destruction.”

Fresh reports about protestors attacking police posts and CRPF camps poured in today as well. In one incident, 15 persons were injured at Ladiyar Tral when the CRPF opened fire to disperse protestors who had reportedly attacked the paramilitary camp.

Responding to the government’s appeal for separatists to cooperate in restoring normalcy, moderate Hurriyat leader Mirwaiz Umar Farooq hit out at the PDP-BJP coalition for the fresh cycle of unrest in Kashmir, wondering how the Hurriyat could be of help when they are labeled a “threat to peace”.

“What do they want us to do? They label us as a threat to peace and cage, confine and gag us. We are not even allowed to offer Eid prayers. So how can we be of help?”, the Mirwaiz tweeted as top separatist leaders including Syed Ali Shah Geelani and Yasin Malik extended their strike call up to Wednesday.

At the same time former chief minister Omar Abdullah criticised Mehbooba Mufti for her handling of the crisis.

“Please don’t take the easy option of hiding behind your spokesperson and your police officers. No one elected them, the people elected you (sic),” Omar tweeted, even as he extended his support for the restoration of  normalcy while urging her to take the lead.

Omar’s National Conference also hit out at BJP, which is running the state government in coalition with the PDP, for the deteriorating situation in Kashmir, saying the party wanted to convert the state into a “hate-theatre” in the run up to elections in Uttar Pradesh, while cautioning that the misadventure could have serious political and strategic ramifications for the sensitive state.

Acutely aware of the fact that it is the cycle of killings which is resulting in deterioration of the situation, the chief minister for the second consecutive day asked the police and the paramilitary forces to exercise maximum restrain to avoid loss of lives or grievous injuries.

“My heart goes out to the families of the youth, including civilians and policemen, who lost their lives in the latest spate of violence. We have already lost a generation to bloodshed and violence, and can’t afford to live amidst prevailing political uncertainties with young boys getting killed every day,” she said as she blamed “some elements for fomenting trouble by instigating youth to indulge in extreme violence resulting in a vicious cycle of frenzy and bloodshed”.

However, with anger continuing to boil over on the streets, her words are unlikely to have much immediate effect.