In 'Christian' Meghalaya, the BJP Finds Its Hindutva Baggage Weighing It Down

Though BJP was making inroads into the crucial Garo hills, the issue of visa denial to a Christian preacher is threatening to cloud its poll prospects in the upcoming assembly polls. 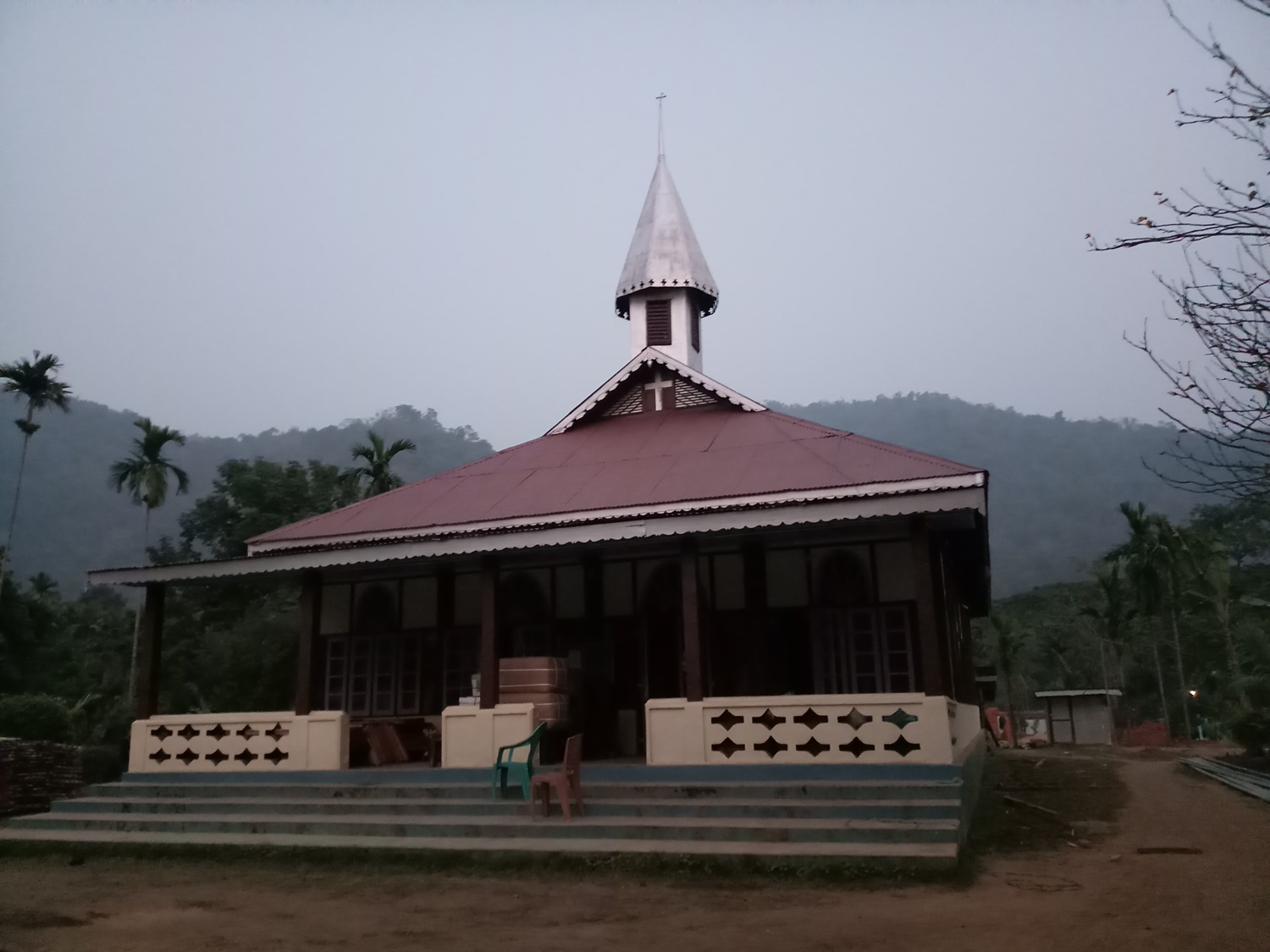 Not far from it, standing equally desolate, is a memorial stone in blue. While one side of it is in memory of an uncle-nephew duo – Omed and Ramke Momin — the other side lists 27 names under the date “14thApril, 1867”and another 10 names under: “15thApril, 1867”.

Simple and minimalist they may be, but both the church and the memorial stone are an integral part of the present-day socio-religious life of the majority of the state’s Garo community. Indeed, they are the fount of it.

It was in Rajasimla, around the area where the church stands, that Christianity first set its roots in the Garo Hills in 1867.

Today, with more than three lakh Garos as its believers, the Baptist Church, under the Garo Baptist Convention, affiliated to the Baptist World Alliance, is the third largest denomination in the state after the Roman Catholic Church and the Presbyterian Church.

The pastor of the church, Jaseng Marak, has been unusually busy for some time. “We are celebrating 150 years of Christianity in the Garo hills from February 8 to the 11th,” he said when The Wire met him this past week.Dozens of half-done bamboo frames of roofs, poles to set up a stage, bamboo fences for entry and exit points lie strewn around a field nearby as proof of the preparation.

Besides the devout arriving at Rajasimla from across the four districts in the Garo hills, Pastor Marak said visitors from different parts of the country and outside it are expected to take part in the “Soba” (gathering).

“It is an annual religious event of the Garo Baptist Mission but this year it is special because of the 150 years’ celebrations. We are expecting a lot more people than we usually get,” he added.

Over a cup of tea, he related a story to this correspondent that all Garos under the denomination of the Baptist Church know well.

“Assam came under the British in 1826. After some years, the Christian missionaries arrived in the region. The American Baptist missionaries were the first to come; the Roman Catholics entered the region later. On February 8, 1863, a Garo man named Omed Momin, who served as a subedar in the British forces, along with his nephew Ramke Momin, were the first from our tribe to convert to Christianity. He was baptised by the Reverend Miles Bronson in Guwahati’s Sukreswar ghat by the Brahmaputra,” he said.

“Soon, Omed resigned from his job and returned to his village in Watrepara.” Pastor Marak, continued, “But he was chased out of his village because the villagers were then followers of the animist religion called Songsarek. He settled in an area, about two kms from where the present Baptist church exists, after erecting a hut. We are now rebuilding that hut in his memory.”

“The list of 37 names in the memorial stone”, he pointed out, “were the first Garos whom Omed and Ramke converted to Christianity in 1867. Together, they built a church here and the American missionaries thereafter began to work directly with them.” The Rongkil river, where the first lot took a dip to baptise themselves, flows not too far from the church.

The list of international visitors to the Soba of the Baptist church, situated close to Dudhnoi town of Assam that borders Meghalaya on the Garo Hills side, is quite long. But some church officials told The Wire that they “are facing a problem for the first time.”

“Some of our international invitees, who are religious leaders, have been issued tourist visas by the central government instead of a work visa, which is what they usually apply for. This has happened for the first time. So the problem is, they have to be careful not to preach their religion in the Soba. We also now have to be careful in printing our leaflets, etc. so that they are not in trouble. We can’t use the word ‘preach’ but say, something like, they will share the gospel,” said a church official who requested anonymity.

One official said, “Since the last three years, the visas of some of our religious leaders have been denied. So they are compelled to apply for tourist visas.” Preparation on for the 150 year celebration of Christianity in Garo Hills. Credit: The Wire/Sangeeta Barooah Pisharoty

The matter was shared with the National People’s Party (NPP) president Conrad Sangma, when he visited the church some weeks ago as a part of his party’s ongoing campaign for the February 28 assembly polls.

With the Bharatiya Janata Party (BJP) mounting an aggressive campaign to oust the Congress government in the state, and the NPP being its ally in Manipur and in the central government as a member of the National Democratic Alliance (NDA), an assurance from Sangma that the church and the people practicing Christianity in the state “would be protected” was thought to be “an obvious thing to do.”

Though the BJP was making inroads into the Garo hills, which have 24 assembly segments — a crucial number in a state that needs just 31 to cross the half-way mark to form a government – the Narendra Modi government’s notification last year to regulate the sale of cows, didn’t go down well with the beef-eating population. Many looked at this in tandem with the cow vigilante attacks in different parts of the country and as a covert attempt to control their food habits.

Quite a few local BJP leaders had to leave the party after they were castigated by BJP national in-charge of the state, Nalin Kohli, for being a part of a beef eating feast in Tura. That furthered the doubts.

The BJP did try to allay their fears. The party’s new state -in-charge and its Christian face, Union minister K.J. Alphons, met several church leaders in the Garo hills and talked about the “inclusive” governance of the BJP. Those whom he met along with the party’s national leader, also in-charge of the state, Nalin Kohli and state BJP president Shibun Lyngdoh, included both Pastor Marak of the Baptist Church and the  Reverend Fr. Theodore T. Sangma, chief of the Roman Catholic Church, the Sacred Heart Church Shrine, in Tura.

Talking to local reporters after the meeting, Alphons said, “There was some apprehension and fear about what was appearing on social media. I clarified the issues with them because 99% of social media news is fake. When the BJP came to power in 2014, there was  apprehension that churches would be burnt and Christians would be beaten to death. There has not been even one instance when a church was burnt or Christians attacked anywhere in the country after Modi came to power.”

However, speaking to The Wire recently, Reverend Sangma said, “We just met, it was a courtesy call, we didn’t discuss much in detail about the fears that people have expressed.”

Last month, on January 8, a large number of Catholic believers gatheredin churches in different parts of the Garo hills to pray “in protest” against the recent attacks in BJP-ruled Madhya Pradesh “where a group of seminarians (young brothers) were assaulted by right-wing members for organising a Christmas Carol at Satna in which the police refused to act.”

Rev.Sangma was reported in the media as saying, “Such cases of attacks on Christians are worrying. We need to be cautious and concerned.”

Reacting fast, Alphons announced a Rs 70-crore Central government package for the uplift of both the Roman Catholic church and the Mawkhar Presbyterian church in the state. Both have, however, decided not to avail the central financial assistance.

Though the BJP is contesting 20 seats in the Garo hills, while travelling through the region, it is not difficult to pick clues from voters that the party has a lot of electoral ground to cover there.

Baptist Church officials said the NPP’s Sangma had then offered an “assurance”to them that Christians will be protected. Though church officials categorically deny supporting any party or prodding believers to vote for particular candidates, a trip through Resubelpara, Bajendopa, Kharkhutta and Mahendraganj constituencies of the North Garo Hills showed the “assurance” did seem to have an effect on many voters. They seemed to be open about “giving a chance” to the NPP in the ensuing elections.

However, trouble knocked on February 8 when news reached Rajasimla that the visa application of the Baptist World Alliance head, Reverend Paul Msiza, and a star invitee to the Soba, was rejected by the Indian embassy in South Africa.

The Congress, which has been making use of the BJP’s Hindutva politics to drum up support in a Christian majority state, was quick to grab this opportunity. State chief minister Mukul Sangma took to Twitter to “strongly condemn” it, urging external affairs minister Sushma Swaraj to “expedite the visa proposal”. 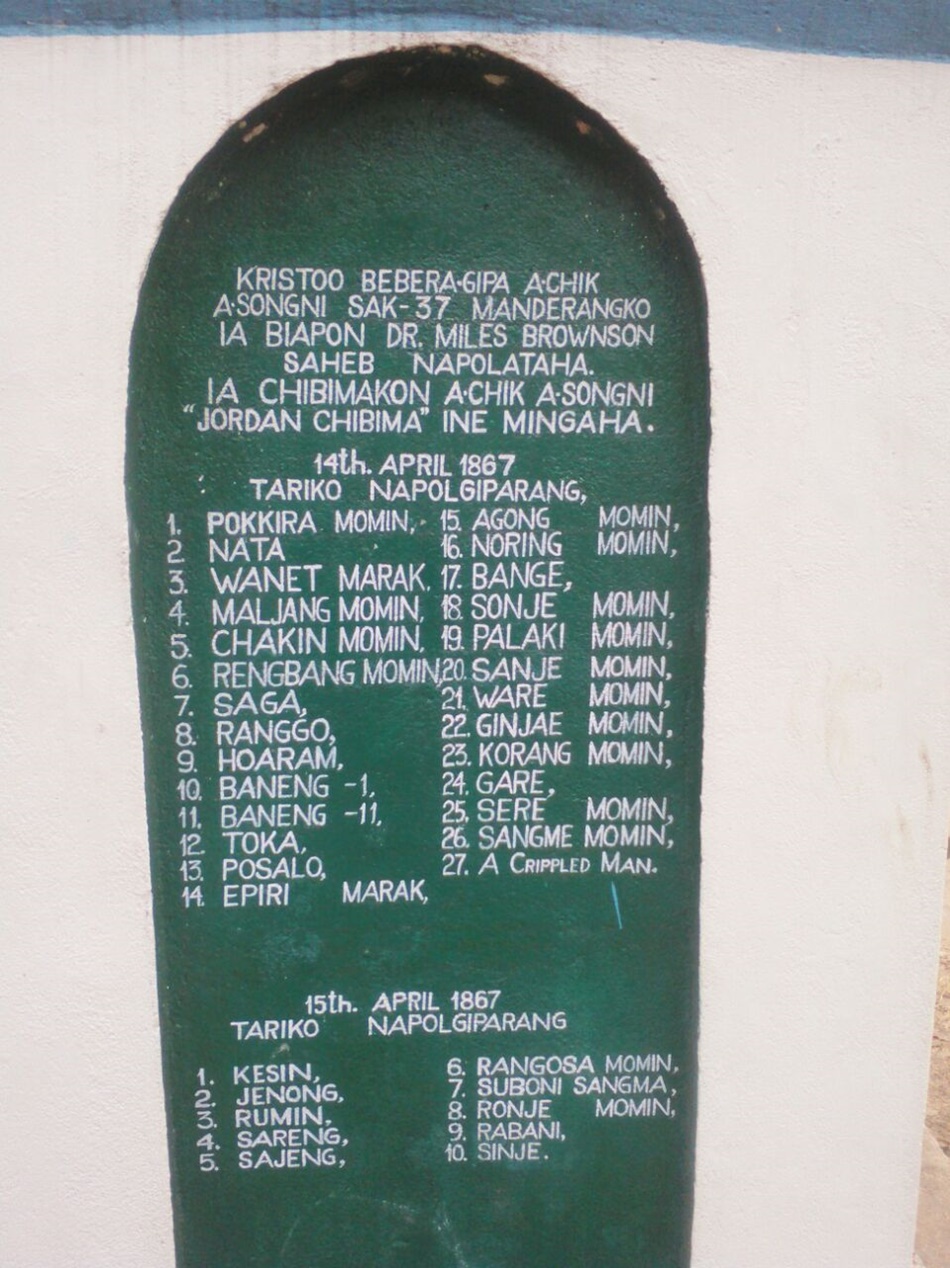 Memorial stone with names of the first 37 Garos who converted to Christianity. Credit: The Wire/Sangeeta Barooah Pisharoty

Vincent Pala, the working president of the state Pradesh Congress Committee, told reporters in Shillong, “It very well exposes the mindset of the present dispensation, the BJP and their masters in Nagpur.”

Alphons, who claimed to have “no idea about it”,found himself on the backfoot at a press meet in Shillong. He told reporters that the issue had been taken up with Swaraj and “Msiza’s visa application has already been reopened to facilitate his arrival in India.”

The NPP’s Sangma quickly did what he had done before – shot off a letter to the Centre.

Seeking Swaraj’s “intervention”, the letter addressed to her, said, “The celebration is a one and only historic occasion for the people of GaroHills and those who are connected to the Garo Baptist Convention.”

This is, however, not the first time that Sangma, the lone MP from the Garo hills, has taken to writing a letter to the Centre on the visa issues of Christian missionaries. In April last year, he wrote to the prime minister and Union home minister Rajnath Singh naming three foreign missionaries – Fr Ignacio Zuazua from Spain, associated with the Gujarat-based Jivan Jyoti Society since 1951; Sr Laurel Judith Seaton from Australia, serving at the Missionaries of Charity in Bihar for 42 years; and Belgian Aurele Brys, associated with the Jharkhand-based Ranchi Jesuit Society for 51 years – to “provide all help” as their visas were not renewed. The other MP from the state, the Congress’s Vincent Pala, also wrote a letter to Modi about granting visas to these missionaries.

Around that time, Sangma wrote another letter to the PM –  urging him to to uphold the “secular fabric” of the country and change his government’s plan to observe April 14 as Digital India Day to another date as it clashed with Good Friday.

Speaking from Rajasimla on February 8, a church official told this correspondent, “I don’t think there is any scope of Rev. Msiza attending the Soba now even if the central government reopens his visa application. We wanted him on the inaugural day, which is over.”

With a little over two weeks to go for the elections, the BJP is now keepingits fingers crossed that the visa issue doesn’t reflect on the March 3 poll results in the crucial Garo hills.