Like most Left intellectuals in Assam, Guha was highly critical of the “chauvinist” tendencies in the populist agitation known as the “Assam Movement” of 1979-1985, which aimed at identifying and disenfranchising migrants from Bangladesh. 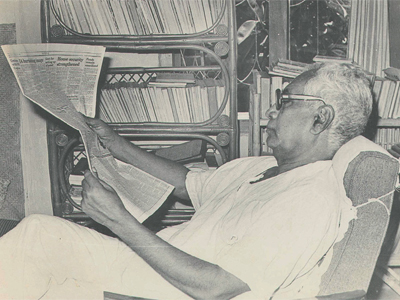 When Amalendu Guha passed away on May 7, 2015 at the age of 91, Assam and India lost more than a noted economic historian. Guha embodied an entire intellectual and political tradition that was deeply rooted in local history yet engaged with debates in the wider world, an academic who lived his ideals in the form of the communist movement, a bilingual scholar and a poet. His generation will be hard to replicate as professional scholarship gets more and more detached from the ground.

The son of a schoolteacher, Amalendu Guha was born in Imphal on January 30 1924. After schooling in Imphal and Guwahati, he went to Presidency College where he obtained a degree in Economics from Calcutta University. He got a scholarship to the Indian School of International Studies which later on became a part of JNU, and submitted his thesis on the economic transition of Afghanistan in 1962. Guha spent the greater part of his teaching career at Darrang College in Assam and later on moved to the Gokhale Institute of Politics and Economics and finally to the Centre for Studies in Social Sciences, Kolkata where he pursued his research in economic history and from where he retired in 1990. He also worked briefly at the Delhi School of Economics in the 1960s. This brief biodata, however, cannot possibly explain what Guha meant to the world of Indian scholarship.

Guha built up a whole tradition of Marxist history writing in Assam. Moving away from what are called the colonial and “nationalist” schools, Guha opened up a new landscape of Assam’s society, polity and economy from the medieval to the modern times. He was thoroughly acquainted with the rich buranji tradition of Assam – Ahom historical texts dating from the 13th century which not only chronicled historical events but the society and culture of their times — and acknowledged his debt to historians like Suryya Kumar Bhuyan and Heramba Kanta Barpujari. His most famous text, Planter-Raj to Swaraj: Freedom Struggle and Electoral Politics in Assam 1826-1947, which was reissued after thirty years by Tulika books in 2006, describes the interplay of the region’s plantation economy, colonialism, migration, the struggle of workers and cultivators, and the role of the law and the administration.

Though less well known, Guha’s other essays on the region were equally perspicacious and involved path-breaking research and analysis. The collection of essays entitled Medieval and Early Colonial Assam: Society, Polity and Economy deserves special mention. Yet it would be wrong to assume that Guha’s work was confined to Assam alone. He researched and wrote on a variety of topics which included the Parsi-Seths and their entrepreneurship, Dutch trade in 17th century Bengal, aspects of Mughal economy and India’s ocean trade, just to mention a few topics. However, Assam was certainly his first love and he wrote extensively on topics ranging from feudal relationships in Goalpara., the Mayamara Revolt and Vaishnavism to the wet rice cultivation and economy of the Ahom rulers. In brief, Guha’s work was marked by a panoramic sweep accompanied by Marxist rigour and analysis.

A member of the undivided Communist Party of India and involved in the Indian People’s Theatre Association movement of the 1950s, Guha was incarcerated during the Sino-Indian border war in 1962 and had to spend some six months in Odisha’s Berhampur jail along with several leading Communist leaders of Assam including the legendary Bishnuprasad Rabha. Though Guha gave up his party membership in 1965, his active association with Left politics continued.

Like most other Left intellectuals in Assam, Guha was highly critical of the “chauvinist” tendencies in the populist agitation known as the “Assam Movement” of 1979-1985, which aimed at identifying and disenfranchising migrants from Bangladesh. His position on the identity struggles and nationality question of small nationalities like the Assamese (which he termed as “little nationalism turned chauvinist”) resulted in a major debate which featured on the pages of the Economic and Political Weekly. Towards the end of his life, Guha clearly saw the challenge posed to class-based politics by the various forms of ethnic assertions that were taking place in northeast India. Nonetheless, he continued to pin his faith on Marxist ideology, even as the Left’s influence continued to decline under a leadership which had proved itself quite inept in adjusting itself to the changed situation. Guha’s relevance as a historian will perhaps be felt all the more at a time when history writing itself is being seriously challenged in some quarters by growing subjectivity and collective passions.

Amalendu Guha is survived by his wife, the noted writer Anima Guha and a son. One of the pioneers in this cause in Assam, and a rationalist to the end, he had in 2006 pledged his eyes to the Shankardev Nethralaya, Guwahati and his body to the Guwahati Medical College.

(Prof Udayon Misra taught at Dibrugarh University and is a scholar of the North-East, currently working on partition politics and Assam)

Note: Readers who’d like to learn more about Amalendu Guha’s life may wish to read the interview he gave Mamata Mishra in the Sentinel in 2007.

(Note: For a few hours, the photograph we carried was of Amalendu De and not Amalendu Guha. The error is regretted)