While the powers in AIADMK are backing Sasikala unanimously, there is a great deal of anger against her amongst party cardres and the general public. 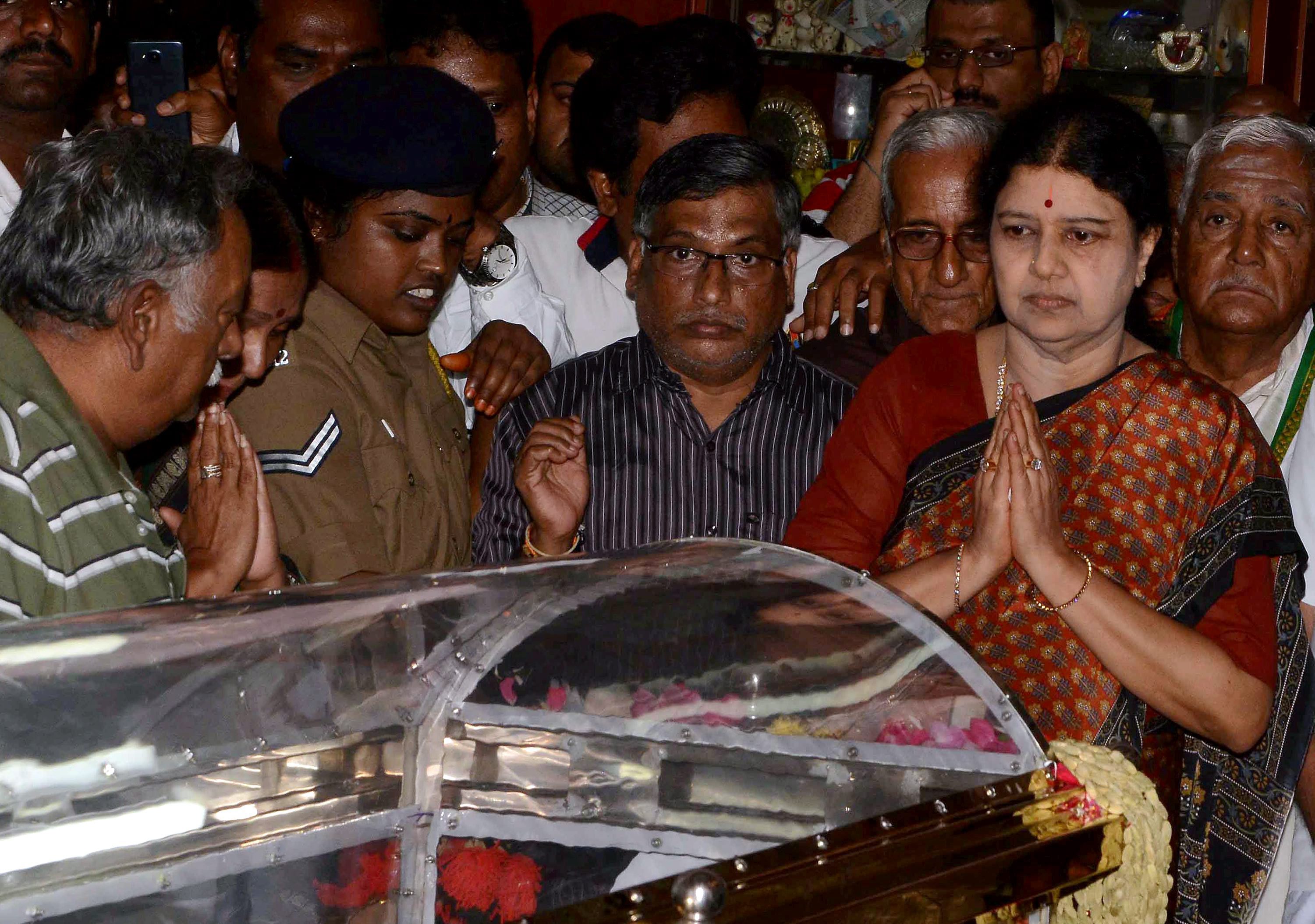 Chennai: These are interesting times in Tamil Nadu politics as people await the imminent coronation of Sasikala Natarajan – or Chinnamma (meaning mother’s younger sister in Tamil) as she has been called by functionaries of the ruling All India Anna Dravida Munnetra Kazhagam – as chief minister of Tamil Nadu.

Ever since the death of chief minister J. Jayalalithaa on December 5, there has been a growing expectation of Chinnamma taking hold of the reigns of government. It’s not the question of how or why, but when. When O. Panneerselvam – or OPS as he is called – took over as the chief minister just hours after Jayalalithaa’s death, the top echelons of the party said in private that this was only a temporary arrangement. Just a week after OPS was sworn in, his ministerial colleagues started giving interviews to local news channels openly appealing to Sasikala to take over as chief minister. The chorus halted immediately after the income tax raids at the houses and offices of the then chief secretary of the state, Rama Mohana Rao, on December 21 in Chennai.

But after Rama Mohana Rao accused the central and state governments of witch hunting in a press conference, the mood started changing once again. “Yes. That’s true. Contrary to expectations, the Centre’s raids came to a halt after Rama Mohana Rao’s press conference. Rao openly attacked the Centre for assaulting the federal structure and condemned the state government for failing to protect him. Where is the state government? Rao openly challenged OPS. This seems to have done wonders for the AIADMK and the Modi government was pushed back. I don’t know about the upcoming rounds, but clearly the first round has gone to Sasikala, and Modi is on the defensive ever since,” a senior bureaucrat who did not wish to be named told The Wire.

Though OPS has been a Sasikala loyalist throughout his career, suspicions have grown among Sasikala’s clan in the past few days that he may be playing soft towards the ruling BJP at the Centre. In fact, there are skeptics who say that he may not easily vacate his seat. “The CM’s post cannot be easily snatched from him. If he wants to give it to Sasikala, it’s well and good. But if he refuses to vacate, then it’s not an easy thing to dislodge him because as CM, he has constitutional protection and the entire security apparatus as his gauntlet. Probably he may want to continue as CM with the support of Sasikala. But how long he will enjoy her backing is a million dollar question,” says Ravinthran Duraisamy, a lawyer and political analyst based in Chennai.

The voices in the chorus to make Sasikala the chief minister had a new addition on Monday, with the party’s propaganda secretary and deputy speaker of the Lok Sabha M. Thambidurai writing an open letter to her. In that letter, Thambidurai clearly says that Sasikala should take charge of the state. This must happen to avoid dual power centres in the ruling dispensation, which shall not be good either for the party or for the government, he writes.

At the same time, there are a few civil society voices  which have criticised the unfolding exercise in Tamil Nadu. “This is nauseating. Cabinet ministers are speaking against their own chief minister and want someone else as CM. The cabinet should speak in one voice. This sort of behaviour on the part of cabinet ministers clearly undermines the authority of the chief minister who is holding a constitutional post. Either OPS should sack those who are openly demanding someone else as CM or he should move a confidence motion in the assembly to prove his majority or the governor should direct him to take a vote of confidence in the House. If none of these three things happen, then OPS should resign. This cannot and should not continue for long,” says M.G. Devasahayam, a former IAS officer and retired chief secretary of Haryana.

The 62-year-old Sasikala Natarajan has been closely associatied with Jayalalithaa since 1983. She was introduced to Jayalalithaa, who was then propaganda secretary of the AIADMK, by V.S. Chandralekha, a woman IAS officer. Sasikala belongs to the predominant backward community of Thevars in southern Tamil Nadu. Today she has an iron grip over AIADMK, with all the 136 party MLAs expressing their full support for her.

Anger on the ground

But there is huge resentment and anger amongst the AIADMK’s ground level cadres and the public in particular against Sasikala’s ascendancy, both in the party and, as is looking likely, in the government. If one goes to any part of Tamil Nadu today and speaks to the common people, especially women, it is easy to gauge the depth of the anger. “This is really flabbergasting. In my 25 years of journalistic life I have not seen this much of anger against an individual among the people. People virtually loathe Sasikala – and among the women the main grouse is that there was foul play in the death of Jayalalithaa and their needle of suspicion is directed against Sasiakala. Just look at the posters and you can see the photographs of Sasikala were either disfigured with cow dung or torn out. Not a single photo of Jayalalithaa was touched. These are all things unheard of in the past. This is the hard reality,” says R.M. Elango, a local journalist.

Amidst this flood of anger, there is an interesting angle to the Sasikala affair in Tamil Nadu. K.Veeramani, general secretary of the Dravidar Kazhagam or DK, a rationalist outfit, in a supporting statement for Sasikala says this, “We all should support Sasikala, because by supporting her we are supporting the AIADMK and thereby defeating the nefarious designs of the communal forces and the BJP which are trying to spread their tentacles in the state especially after the demise of Jayalalithaa”.

More than people’s anger and the Modi government’s displeasure, the genuine threat to Sasikala’s ascendency is the impending Supreme Court judgment in the disproportionate assets case against Jayalalithaa. Sasikala was a co-accused in the case and the judgment is expected any time. If the Supreme Court ruling goes against her, the curtains will fall on her political future.

In private, AIADMK functionaries admit two things. One, they say that they are aware of the huge discontent among the cadres and the public. Two, they say that Sasikala is the only unifying force for the party as anyone else coming to the front will result in the party splitting in two or more pieces and hence they have no options. The AIADMK government still has four and half years to rule and no one wants an election in the near future.

Another interesting thing to be noted in the coming days is how the main opposition party, the DMK which has 89 MLAs in the 234-member assembly, will try to play with the new equations in the state.