Chidambaram Hits Out at Modi Govt on Economy, Calls for 'Reset' on Liberalisation Policies

It appears that the reset being advocated by Chidambaram has the imprimatur of Rahul Gandhi, who has come out heavily on unbridled privatisation and crony capitalism afflicting the country. 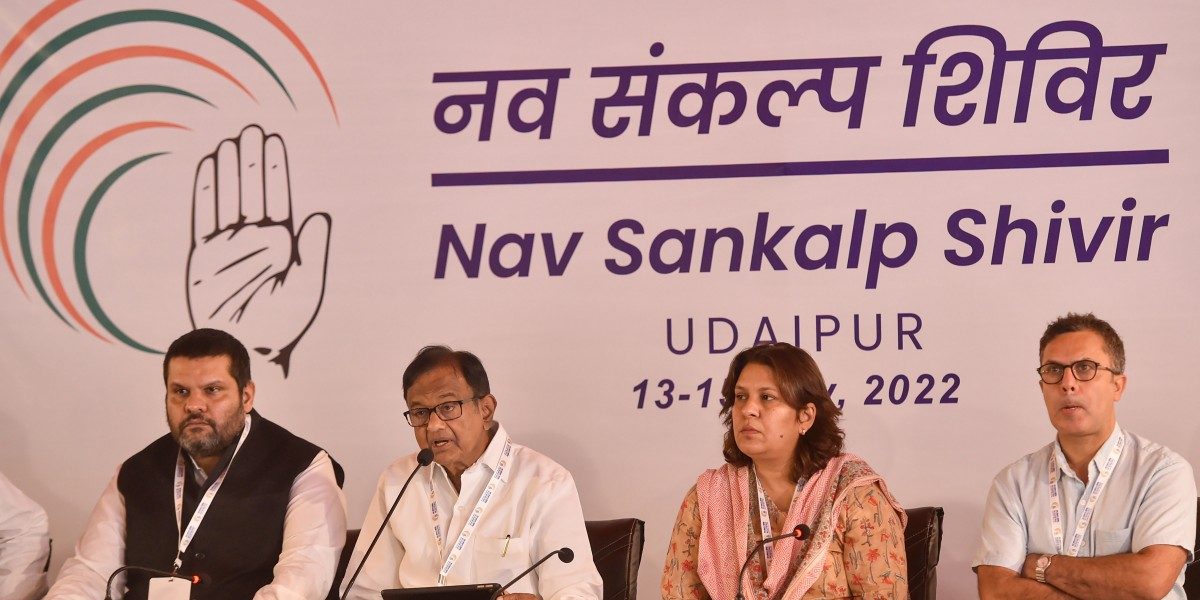 Udaipur: Hitting out at the Narendra Modi government for precipitating one of its worst-ever economic crises in India, senior Congress leader P. Chidambaram said that there was a need to “reset” the economic policies keeping in mind the new global and domestic realities after 30 years of liberalisation, privatisation, globalisation (LPG) policies in India.

He said that the intended “recalibration of economic policies of the party” will not mean taking a step back from LPG policies but a reinvention of those in the current “post-liberalisation” era.

“A Congress-led government ushered in a new era of liberalisation in 1991. The country has reaped enormous benefits in terms of wealth creation, new businesses and new entrepreneurs, a huge middle class, millions of jobs, exports and lifting 27 crore people out of poverty during a 10-year period. After 30 years, it is felt that taking into account global and domestic developments, it may be necessary to contemplate a reset of the economic policies,” he said in his remarks.

Explaining what a “reset” would address, he said, “A reset of economic policies must also address the questions of rising inequalities, extreme poverty among the bottom 10% of the population, India’s rank in the Global Hunger Index 2021 (101 out of 116 countries) and evidence of widespread nutritional deficiency among women and children.”

Apparently, most of the reset being advocated by Chidambaram has the imprimatur of former Congress president Rahul Gandhi, who has, in several of his political rallies, has come out heavily on unbridled privatisation and crony capitalism afflicting the country.

The former union finance minister spoke on the second day of Congress’s Chintan Shivir (brainstorming session), where he is also convening a committee on the economy with 60 members to chalk out a new economic policy programme for the party. Altogether, there are five other such panels which are discussing various issues from economic and political issues to organisational matters.

Congress leaders at day one of the Chintan Shivir in Udaipur on May 13. Photo: Twitter/@INCIndia

Chidambaram said that on the first day of discussions in the panel on the economy, 37 out of the 60 members expressed their views, and by the end of the Shivir, the panel should be able to broadly outline what the party’s economic agenda would be.

‘Government clueless on the economy’

He hit out at the Modi government for the economic crisis in the country even while running a “hyperbolic” campaign like BJP’s “India Shining” in the run-up to the 2004 Lok Sabha elections.

“I am sure we will be able to put forward an economic programme that will defeat the hyperbole of the Modi government,” he exuded confidence.

He spoke about a slower rate of growth, higher inflation levels, greater unemployment and lower social services expenditure during the Modi regime when compared to the two United Progressive Alliance (UPA) governments led by Congress.

“The external situation has added to the pressures on the economy. The government appears clueless on the ways to deal with these developments. $22 billion has flowed out of the country in the last seven months. The foreign exchange reserves have depleted by $36 billion. The exchange rate stands at Rs 77.48 to a dollar, the highest ever,” he said.

He said that the BJP betrays a complete lack of understanding of economic matters, as is reflected in absence of remedial measures undertaken by the Union government. He also took a dig at BJP by recalling Narendra Modi and late Sushma Swaraj’s statements that “the BJP will bring the exchange rate to Rs 40 if elected to power”.

In his remarks, he especially emphasised on the need for increased social sector spending to deal with the crisis in the country. “A comprehensive review would also be justified by the health and education outcomes as revealed by the Annual State of Education Report 2021 (ASER 2021) and the National Family Health Survey-5 (NFHS-5). We believe that a re-calibration of economic policies can influence health and education outcomes,” he said while pointing out the need for the economic policy to address concerns like poverty and poor nutritional levels among women and children, and unemployment.

Speaking about Goods and Services Tax (GST) compensation dues of Rs 78, 704 crore to the states, he said that “the time is ripe for a comprehensive review of Centre-States fiscal relations”.

“The consequences of the poorly-drafted and unfairly-implemented GST laws brought in by the Modi government in 2017 are there for everyone to see. The states’ fiscal position is fragile as never before and needs urgent remedial measures.”

He said that a reset would also mean that the Indian workforce should be prepared for “the new ways in which industry, business and trade will be conducted in the 21st century with the greater use of automation, robotics, machine learning and artificial intelligence”.

On a question about whether the new economic programme can defeat the “BJP’s politics of polarisation”, as highlighted on Friday by Congress interim president Sonia Gandhi, he said any meaningful debate can’t happen if both these factors were seen in a binary.

“We will oppose polarisation, and we will also plead for a robust economic policy,” the senior leader said.

On how the Congress party can use an effective communication strategy to take the “recalibrated” economic policy to people, he acknowledged the need for the party to better communicate the party’s programme. “Economic policies are the lifeline of the country. It touches everybody,” he said.

The emphasis by Chidambaram on social sector expenditure flows out of multiple statements made by Rahul Gandhi, who in his political campaigns has been highly critical of unbridled privatisation and crony capitalism.

The former Congress president has also been speaking about rejuvenating government infrastructure while also advocating the need to energise the Indian economy by strengthening medium and small scale industries. Chidambaram, however, said that Rahul Gandhi was present in the meeting convened by the panel on the economy on Friday, but didn’t participate in discussions.