Even before the election, many factors lined up to put the BJP's Sarabjit Kaur at an advantage. But on Saturday, an AAP councillor's vote was declared 'invalid', breaking the tie in favour of the saffron party. 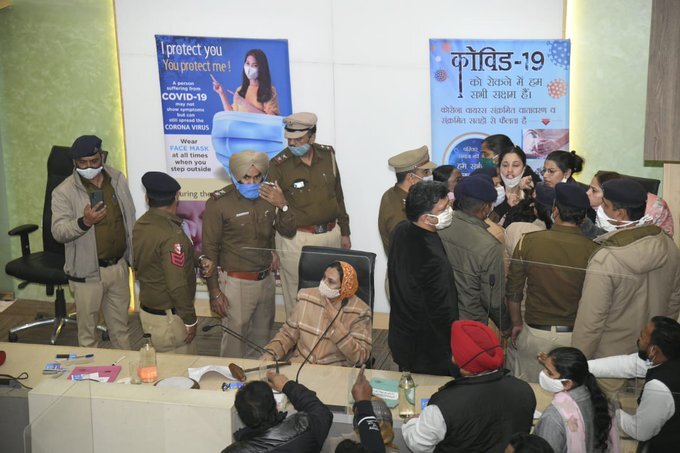 Amidst allegations of foul play from AAP members, the Chandigarh police needed to intervene to control the situation. Photo: Twitter/nagarkoti

Chandigarh: The Aam Aadmi Party (AAP) accused the Bharatiya Janata Party (BJP) of “murder of democracy” after it narrowly lost the mayoral election to the Municipal Corporation Chandigarh held on Saturday, January 8, during which an AAP councillor’s vote was declared invalid.

The BJP, despite its poor show in the Chandigarh civic polls last month, saw its candidate Sarabjit Kaur win by just one vote.

AAP, which fought the local polls for the first time, was expected to win the mayoral election after it emerged as the largest party. However, a series of events led to the BJP taking the driver’s seat.

On Saturday, out of the total 36 votes, only 28 were polled – since seven Congress councillors and the lone Shiromani Akali Dal (SAD) councillor had abstained.

Although the AAP and BJP candidates were tied at 14 votes each, later, one vote in AAP’s favour was declared invalid, paving way for the Sarabjit Kaur’s victory.

How did BJP gain the advantage?

AAP had emerged from last month’s polls as the largest party, securing 14 of the 35 seats in the Municipal Corporation Chandigarh (MC). The ruling BJP’s won just 12, its tally came crashing down from 80% in 2016 to just 34%. Of the remaining seats, eight went to the Congress and one to the Shiromani Akali Dal (SAD).

Soon after the results were announced, BJP state president Arun Sood told The Wire that his party intended to sit in opposition. Later, however, he declared the party’s intention to contest in the mayoral polls.

Speculation followed in the days after Sood’s announcement, with members of both the Congress and the AAP alleging in press conferences that the BJP was trying to poach their candidates by offering them hefty sums of money to change allegiances. BJP leaders denied the charges.

The BJP’s prospects of coming back to power in the region were given a major boost when newly-elected Congress councillor Harpreet Kaur Babla joined the party. This took the BJP’s tally in the Council to 13 and since the Chandigarh Lok Sabha MP – who is also a member of the BJP – gets an ex-officio vote in the house, the BJP was able to match AAP’s 14-vote-tally. In the ensuing power tussle, the saffron party had a clear upper hand over the novice AAP. 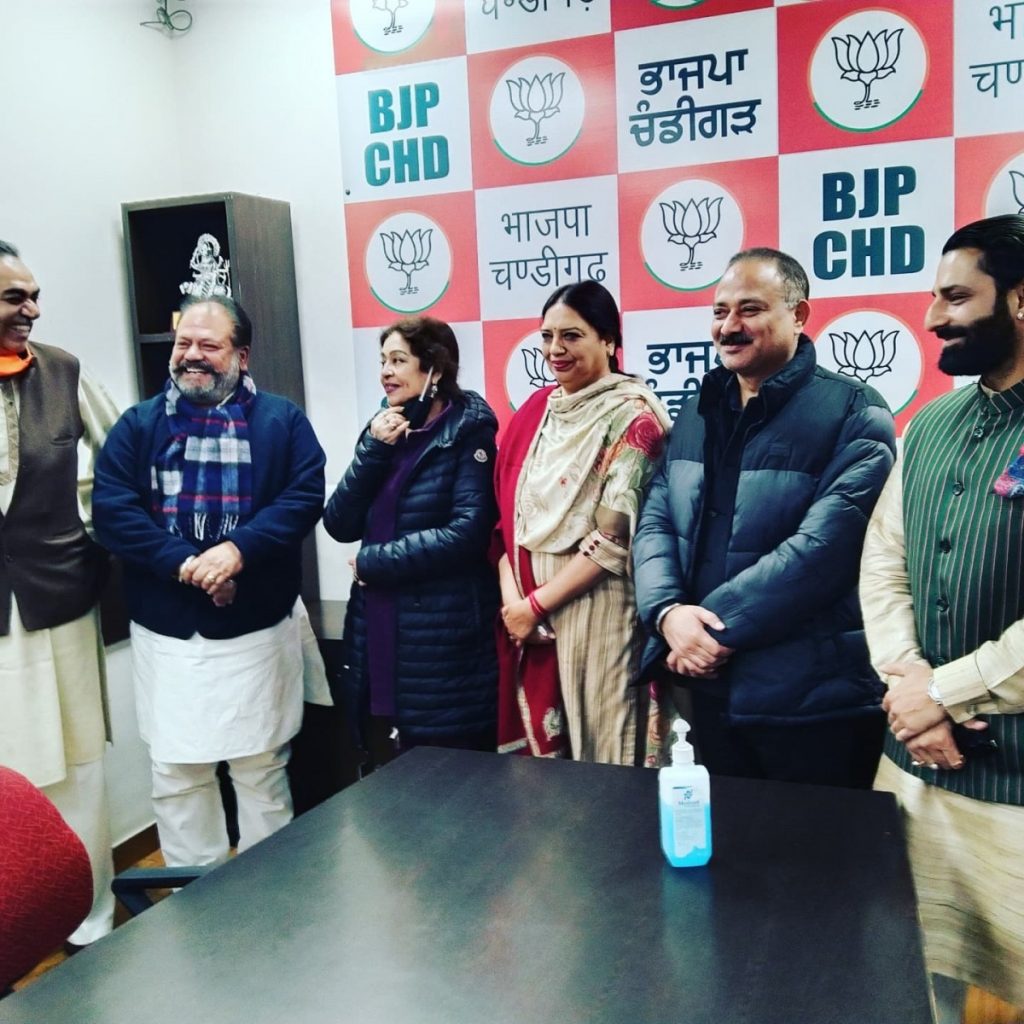 Since there is no anti-defection law, the Congress councillor’s defection came to the saffron party’s rescue.

There were attempts to amend the law in 2018 to include provisions against defection, however, the BJP, which enjoyed more than a two-thirds majority at the time, did not show much enthusiasm to amend the legislation.

The mayoral election became even more interesting when the Congress and the SAD decided to boycott it. With both the BJP and AAP having the support of 14 councillors, AAP Chandigarh convener Prem Garg was expecting the final decision to be taken through a draw of lots, a standard procedure in MCs in the event that both the BJP and AAP candidates garnered equal votes in the mayoral poll.

With the two candidates tied at 14 votes each, the election was finally swung in Sarabjit’s favour when one vote of an AAP councillor was declared invalid. The presiding officer of the election Mahesh Inder Singh – himself a BJP councillor who won in the municipal polls by the narrow margin of nine votes – declared the vote invalid.

This meant AAP candidate Anju Katyal now had only 13 votes. Sarabjit Kaur had  14 votes – 13 from her party’s councillors and one from Kirron Kher, the BJP MP from Chandigarh.

Enraged AAP councillors barged into the place where the new mayor was made to sit and began protesting. Even the marshals present were unable to keep the situation under control and the Chandigarh police had to intervene.

Later, AAP MLA and co-in charge of Punjab affairs Raghav Chadha, too, reached the MC and accused the BJP of foul play. Demanding repolling, Chadha told the media that the BJP had cheated in the mayoral election and went on to say that the election had exposed the SAD and the Congress too. “I want to tell the people of Punjab that there was an unholy pact with BJP, SAD and Congress to deliberately keep the AAP away in Chandigarh,” he said.

Amid this chaos, repolling for the mayoral election was ruled out and the new BJP mayor took over as the BJP councillors and leaders celebrated.

Speaking to The Wire, Garg said that the mayoral election represented the “murder of democracy.” He further noted that the people’s mandate was for the AAP to come to power, as evinced by the results of the election, but the BJP “as usual” spent crores to buy councillors from other parties.

“If this was not enough, it deliberately declared one councillor’s votes invalid in order to declare their own candidate as the new mayor. This is outrageous. This is an unfair election. We are against the result,” said Garg, who, along with his party members, is protesting outside the Chandigarh MC building  in Sector 17.

He said that the whole administrative machinery in Chandigarh helped the BJP snatch the election from the AAP.

“BJP proved that it could stoop to any level to win elections,” Garg said.

He went on to accuse the BJP of not allowing an anti-defection law to be introduced in the civic body which looks after the country’s first planned city. “They (BJP) have been playing these dirty games here for the last several years. They knew that if an anti-defection law was introduced here, they would not be able to play power games,” said Garg.

Garg levelled allegations against the Congress as well. He said by not participating in the mayoral election, the Congress, too, gave the advantage to the BJP’s candidate.

“It proved that both BJP and Congress were fighting elections together in Chandigarh. Both of them plotted against the AAP to keep it out of the mayoral post. But people are watching them. the people of Punjab, where assembly polls will soon be held, will teach them lesson,” said Garg

Did AAP fail to keep its house in order?

Even as AAP has been crying foul, it is possible that someone from the AAP camp has shifted allegiances. In the election to the senior deputy mayor, the BJP candidate won by 15 votes to 13. Since the BJP had a maximum of 14 votes, one AAP councillor must have voted for the BJP candidate. This raises the possibility that the same councillor might have deliberately submitted an invalid ballot paper to pave the way for the BJP candidate’s win.

In the deputy mayor’s election, both the parties once again polled 14 votes each. But the BJP’s luck was evident again, as it won the seat in the draw of lots.

The BJP, on the other hand, has been celebrating and their leaders are claiming that their victory is a result of the party’s development work over the past five years.

Addressing the house, mayor-elect Kaur claimed that the party would continue with development initiatives.

The mayoral term expires in one year. Fresh elections will be held again next year.