An audit of tweets, handles and hashtags the government wants Twitter to block makes it clear that official censorship is being deployed not just against terrorism but legitimate political speech as well. 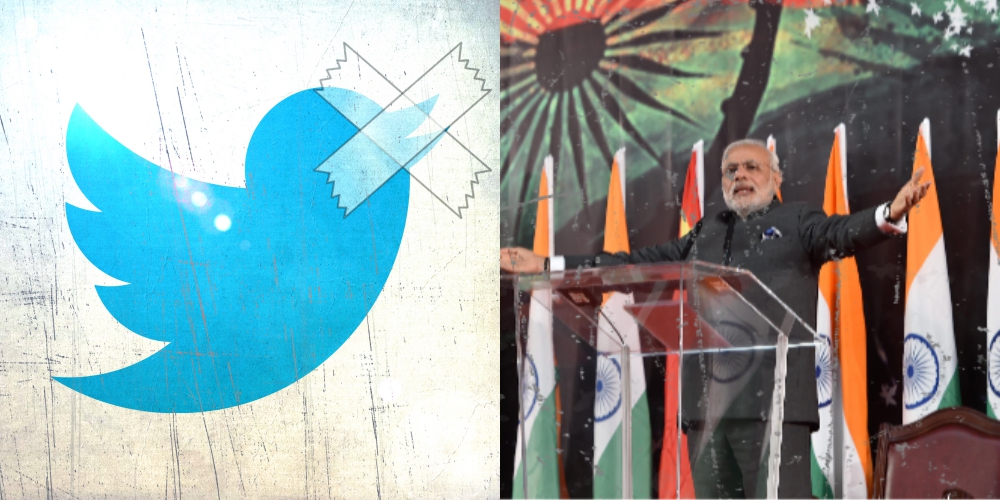 This move is being seen by many as a violation of the freedom of expression in the context of the Kashmir issue as a majority of the accounts targeted tweet regularly about the Indian government’s “apathy towards the residents of the Valley”, share videos and photos of “brutal acts by Indian army”, etc.

A few of the handles also appear to be linked to terrorist organisations like the Jamaat ud Dawa (a front of the Pakistan-based Jaish-e-Mohammed) – it is common for Twitter and governments around the world to block known handles and domains used by terror groups – but others on the block list are journalists, human rights activists and seemingly unaffiliated individuals.

The letter sent to Twitter by the Ministry of Electronics & Information Technology on August 24 orders the social media company to block 115 handles/tweets under Section 69A of the IT Act because they “were found propagating objectionable content”.

However, a review of several of the tweets the government wants blocked makes it clear that its definition of “objectionable content” is rather sweeping and that the blocking order might be driven not simply by a desire to curb terror threats but also the flow of information about human rights violations in Kashmir. Consider these two examples, drawn from the August 24 list:

14 yr old girl blinded after being shot by pellet guns in #Kashmir 500+ have been partially blinded so far. https://t.co/Qpp62jjXOJ pic.twitter.com/eCBC0gdM8C

#Pepper #Pava #Pellet is going to be followed by #StinkBomb #KashmirCrimes
https://t.co/SbXOzTyvdf

It’s unclear how many accounts or tweets on the list Twitter has officially blocked. Many of the tweets linked in the official complaint are still accessible while others lead to suspended accounts or blocked tweets.

Upon investigation, The Wire found another similar request made by the government of India on August 16. This time the Centre requested the removal of 133 accounts, tweets and hashtags. 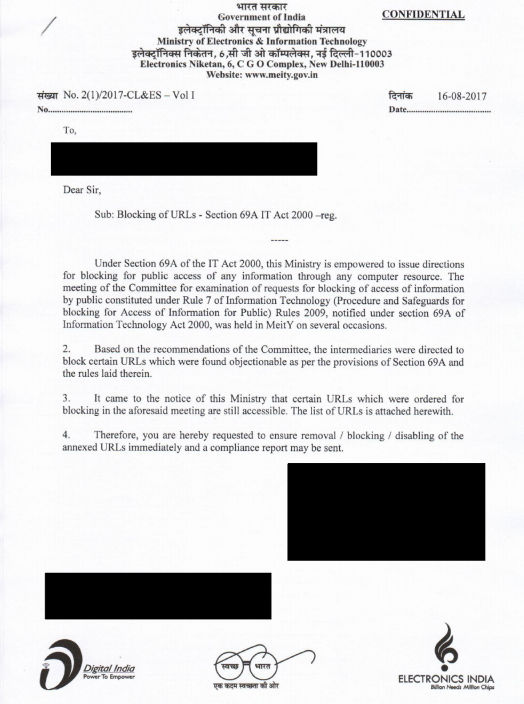 A copy of the letter the IT ministry sent to Twitter on August 16, 2017. Credit: Lumen database.

Certain unusual requests were made by the government in the letter, which suggests this wasn’t the first time the GoI and Twitter had worked together on such issues.

To begin with, the Modi government requested Twitter to block all image searches for ‘Rohingya Muslims’ along with a tweet by a Detroit-based law professor, Khaled A. Beydoun, on the ‘genocide’ in Myanmar. This hypersensitivity is of a piece with India’s controversial stance on the Rohingya issue.

Many Rohingya, who had fled to India after previous bouts of violence and temporarily settled in Jammu, Hyderabad, Haryana, Uttar Pradesh, Delhi-NCR and Rajasthan are now facing the threat of deportation.

The government on Monday said in the Supreme Court that it will not give an assurance to Rohingya refugees that they won’t be deported back to Myanmar. Violent attacks, allegedly by Myanmarese army men, have led to an exodus of Rohingya people from the western Rakhine state to India and Bangladesh. A recent attack by ARSA, a Rohingya militant group, that took the lives of over 70 Myanmar soldiers, has further exacerbated the situation.

Also on the government’s August 18 block list is an account with almost 50,000 followers that shares crowdsourced images and videos from Jerusalem. It is unclear how the images, tweets and videos shared by them violate Indian law.

Amongst the 100 odd objectionable tweets and accounts, one tweet flagged was not about Kashmir at all, but instead focused on rising cow vigilante violence in India.

The government also wishes to crack down on political party gossip it seems. They requested Twitter to block @11AshokaRoad, @LutyensSpice and @LutyensMasala.

Front page of all news-paper booked for Propaganda Ads tomorrow. If u crosscheck, 80% of figures quoted with boss photo, going to be fake!

Popular within the media circles for sharing unverified but juicy gossip about what goes on behind the scenes in Lutyens’ Delhi, two out of these handles haven’t been active in a while.

Self censorship has become a contentious issue among the staff of a popular News channel. Roy under pressure.

@LutyensSpice tweeted the last time in November and @LutyensMasala too has been missing from the Twitter soirée since March 2017.

Who runs these handles has been a topic of speculation since they were launched. @LutyensSpice was one of the first to ‘leak’ details of Arnab Goswami’s tiff with former boss and managing director of the Times Group, Vineet Jain. 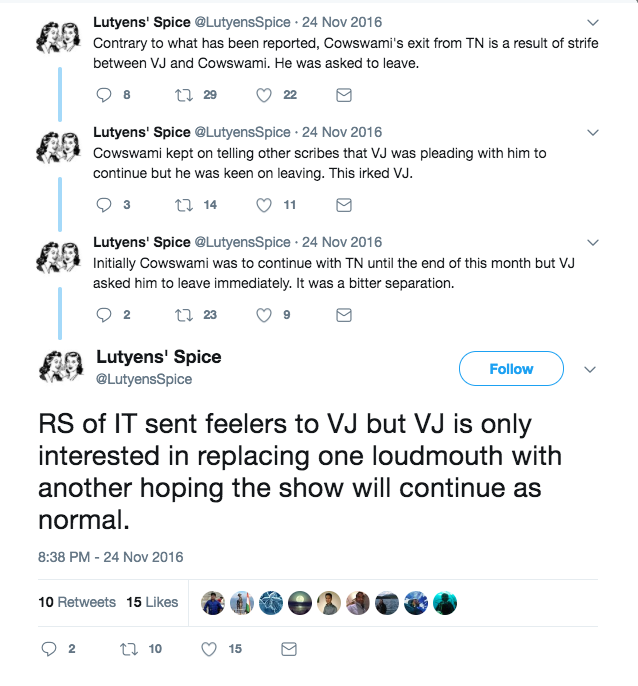 The two parties have been stuck in a dirty courtroom fight ever since Goswami was ‘asked to leave’ Times Now. He now works for NDA MP Rajeev Chandrashekhar’s new channel, Republic TV.

In the same mail, the Centre also ordered Twitter to block twelve hastags, a sweeping demand with serious implications for freedom of expression in the country. 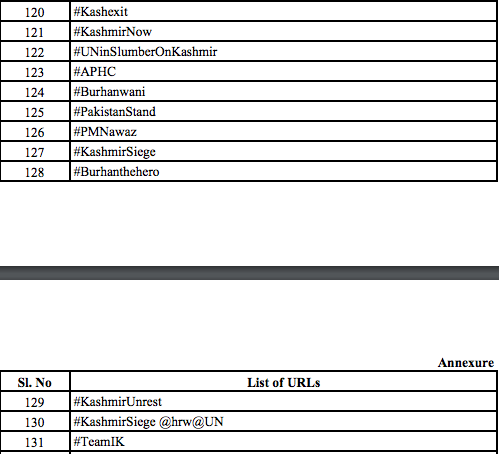 List of the hashtags the Modi government wanted blocked.

Predictably, all of these hashtags are used to tweet on issues related to Kashmir. The hashtag ‘#KashmirUnrest’ for instance has been used by multiple Indian TV news channels in the past and is a common, largely politically-neutral, means by which mainstream media convey security-related developments in the Jammu and Kashmir on Twitter.

Manner and means of blocking

There are two broad implications that we can draw from this recent Twitter censorship episode.

First, the Indian government’s penchant for overbearing and broad-based censorship continues. Both lists were ostensibly drawn up by Indian law enforcement agencies and passed onto the IT ministry for blocking in “the interest of public order”. Why then did The Wire find tweets and handles on beef-related violence, Rohingya Muslims and BJP and Delhi-related gossip on the block list? This is content that in no way harms public security; there is no way these blocks can pass the “reasonable restrictions” test when it comes to freedom of expression.

The government’s latest action comes on the heels of a ‘John Doe’ Madras high court order that ordered the blocking of the whole of the Internet Archive’s Way Back Machine website, just because a section of the website may or may not have engaged in copyright infringement violations.

In both cases, the same flawed principle applies: wide-ranging censorship to deal with one specific issue. Even within the ambit of a specific issue, say Kashmir in this case, the IT ministry has clearly erred. How could it have asked Twitter to take action on general-purpose hashtags such as #KashmirUnrest? While such blocking orders may ostensibly spring from a desire to maintain public security, they also have the effect of censoring and severely limiting how the media and general public talk about politically divisive or contentious issues.

While Twitter has yet to act on these omnibus and clearly unreasonable government demands, freedom of expression is too precious an ideal to allow technology companies to act as the final arbiters of what is appropriate and what is not – as we saw with the Facebook-Kashmir blocks in 2016.

On the face of it, of course, the social media messaging service company appears to have done a decent job so far. It has largely ignored the Indian government’s unreasonable requests to block non-Kashmir related content and even within the realm of contentious or potentially inflammatory Kashmir tweets and accounts, it appears to have taken a considered case-by-case judgment call.

On the other hand, for a company that has reveled in its role as a free speech defender – with its employees referring to themselves as the “free speech wing of the free speech party” – its India team has done a questionable job of living up to Twiter’s global reputation. Most Indian users were introduced to the concept of “withheld tweets” yesterday. 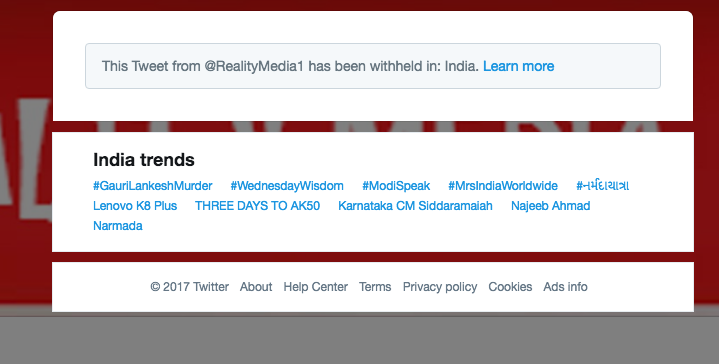 Though seemingly elegant – and certainly less ham-fisted a solution when compared to Facebook – the ‘withheld tweets’ method also raises troubling concerns. What Twitter is telling its Indian users is that it doesn’t have the time, resources or inclination to fight the Indian government in court, the way it has done in the US and across the world. Or perhaps it is sending a more subtle message to Indian users – that they need to argue with their government and fight for free speech by themselves. Both options don’t cover Twitter in glory.

This also isn’t the first time a government has made a ‘block hashtag’ request of Twitter .

Twitter received 91 ‘hate speech’ reports concerning tweets that used the hashtag #rushmoney to encourage Indonesian citizens to withdraw money from foreign-owned banks from July to December 2016. However, the social media company did not take any action on the legal requests. “The reported Tweets did not violate our Terms of Service and were considered political speech in the form of protest against the Government,” it said.

Data on information requests made by India from 2012-2016. Courtesy: Twitter transparency report

Removal requests include worldwide legal requests received from governments and other authorised reporters to remove or withhold content, says Twitter.

The maximum number of removal requests were made by Turkey and France in the same time period, followed by Russia.

With inputs from Devirupa Mitra.