Media coordinator M.A. Salim and former MP V.S. Ugrappa discussed these allegations while waiting for a press conference to start, seemingly unaware that the mics were on. 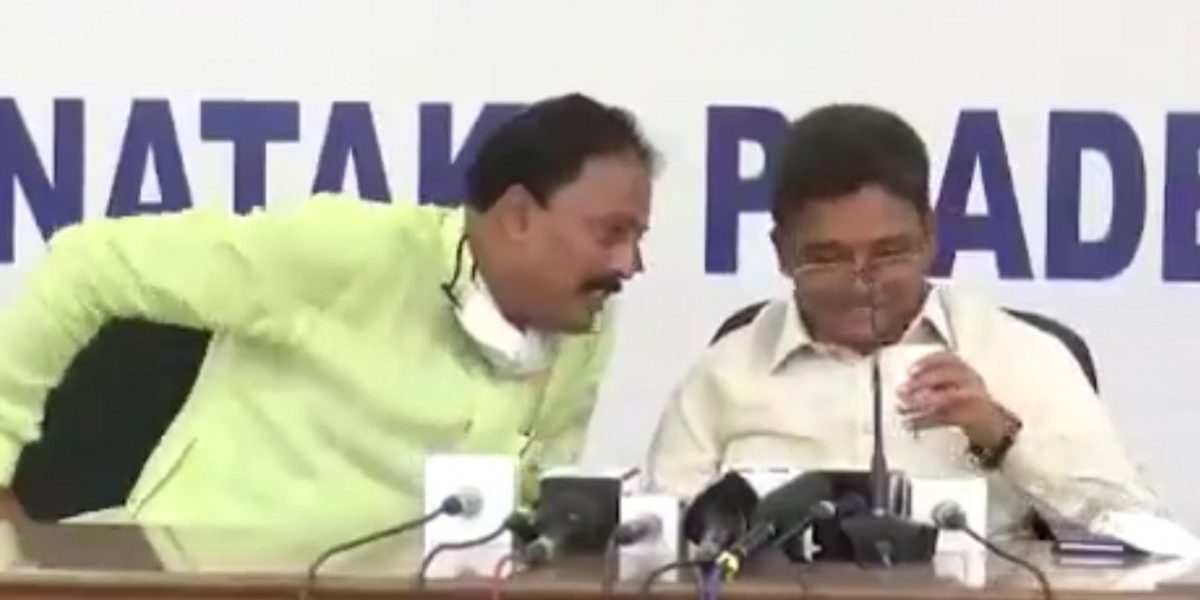 New Delhi: In what will cause major embarrassment to the Congress party, two party leaders from Karnataka were caught on camera discussing alleged bribes taken by the state unit president D.K. Shivakumar, describing him as a ‘collection agent’.

Former Lok Sabha member V.S. Ugrappa and the state unit’s media coordinator M.A. Salim were to address a press conference. While waiting for the conference to start, they began conversing, apparently unaware that the mics were hot.

According to The News Minute, the duo talked in Kannada about income tax raids in Karnataka, especially on a political consultancy firm called ‘Designboxed’. They say that an aide of Shivakumar “made around [Rs] 50-100 crore” and wonder how much Shivakumar himself made. The leaders also discuss Shivakumar style of speaking.

The News Minute has translated their discussion into English, which The Wire has reproduced below:

MA Salim: DK has many adjustments. Uppar, G. Shankar, Hanumanthappa who is from Ballari.

Ugrappa: Uppar is from Bijapur

Salim: Yes but he was in S.M. Krishna’s house recently…This is a big scandal. If we start digging his name also will come.

Ugrappa: Let me tell you something

Salim: Sir you don’t know….(inaudible) is worth Rs 50 to 100 crore. If he has made so much money, then imagine how much the other guy has. He is just a collection agent.

Ugrappa: We all were adamant and made him party president. But he is not rising because of all these reasons.

Salim: No sir, he is not. He stammers when he speaks. Don’t know if he has low BP or sugar. You see when he talks.

Ugrappa: That is what I said now.

Salim: Yes. Media persons ask me if he is drunk. He is not drunk, that is just his talking style.

According to NDTV, Shivakumar did not want to comment on this matter, but said that “the disciplinary committee will take strict action”.

According to The News Minute, a show-cause notice was issued to Ugrappa by the Disciplinary Committee chairman Rahman Khan. It sought an explanation from him within the next three days regarding the conversation, which the notice says “brought embarrassment” to the party. It adds that the two leaders have insulted the KPCC president D.K. Shivakumar by making “baseless allegations which the Congress party denies and condemns”. Salim’s primary membership of the Congress party has been suspended for the next six years, the website reported.

Ugrappa, according to NDTV, claimed that his colleague was simply making him aware of the allegations that have been levelled against Shivakumar by the BJP.

“I came to address a press conference yesterday… our media coordinator, Salim, whispered (to me) that some people were saying DK Shivakumar’s people were taking money… this is the allegation that the BJP is making, and he was just telling me this,” Ugrappa said.

“After the press conference I spoke with Salim… even now you (the media) can speak to him… he made it very clear it was not his allegation… it is the allegation made by BJP and others. He told me, ‘If you take questions from the media, better you should have information… that is why I told you’.”

Meanwhile, the BJP has seized upon the allegations made by the two Congress leaders. Former saffron party spokesperson S. Prakash demanded Shivakumar’s resignation and called for a formal inquiry into the corruption allegations.

“D.K. Shivakumar’s corruption… has been completely exposed… both leaders (Ugrappa and Salim) are strong supporters of (former chief minister) Siddaramaiah. This is viewed as a conspiracy by Siddaramaiah supporters… the feud between the two has been taken to new highs… D.K. Shivakumar must resign and there must be an inquiry,” Prakash said in a video of his own, according to NDTV.