While a section of Congress leaders feel that he can deliver for the party in certain assembly segments, others rue that he may only add to the prevailing factionalism in the party.

In fact, it is a homecoming for him, as he was part of 10 Congress MLAs who left the party in 2016 to join BJP, resulting in the toppling of the then government headed by Harish Rawat. His re-induction into the party has left Congress leaders divided over the impact he may have on the party’s prospects in the upcoming elections. While some say he may not have any major impact, others believe it may cost the party dearly at the hustings.

On the other hand, a few Congress leaders, especially Harish Rawat, are visibly upset with his comeback while others expressed happiness, saying that he could boost the party’s prospects. Given this backdrop, the road ahead for Harak Singh Rawat may not be easy, navigating through the web of complex power dynamics in Congress.

It is also worth noting that his daughter-in-law Anukriti Gusain too joined Congress along with him, triggering speculation that she may well seek a ticket in the upcoming assembly polls. Gusain has been frequenting the Lansdowne assembly segment and accusing the sitting BJP legislator Dalip Singh Rawat of neglecting the welfare of the constituents.

On Friday, Harak Singh Rawat’s induction event ended in a few minutes after he read out an emotionally-charged apology at the party office. He said he would apologise “one lakh times to my elder brother Harish Rawat for what I had done”.

“I am joining Congress as a worker and not seeking anything,” said Harak Singh Rawat.

Harak Singh Rawat is a Garhwali Thakur leader from Pauri. His political career spanning over three decades has been punctuated by several controversies. He is infamous for changing parties, constituencies, and is also known to nurse an ambition to become chief minister of Uttarakhand. His political decisions from time to time have landed him in soup many a time.

In 2016, Harak Singh Rawat along with former chief minister Vijay Bahuguna had pulled off the biggest coup in Uttarakhand to topple the Congress government headed by Harish Rawat before joining the BJP.

Once in BJP, he shared a strained relationship with former chief minister Trivendra Singh Rawat. The differences between them had become a major discussion point in the local media back then. Several controversies, including financial irregularities in the labour ministry he handled, put the media spotlight on him for the last five years.

Although there are no permanent friends or foes in politics, there is a view that his rejoining wouldn’t have any major impact on Congress’ prospects in the ensuing elections.

Nonetheless, Congress has been working on a strategy to woo back those who left the party earlier. The recent reinduction of Yashpal Arya and his son Sanjeev Arya, both MLAs who had shifted their allegiance to the BJP in 2016, goes on to prove this point. So, bringing back Harak Singh Rawat should not come as a big surprise.

However, there are already doubts expressed by many party men if Congress’ magnanimity, as it were, would cost the party dearly in February 14 elections.

Although Congress’s faction led by Pritam Singh has been jubilant over the induction of Harak Singh Rawat, the Harish Rawat camp has been visibly upset. “We don’t know what are the compulsions of the party that Harak Singh Rawat – who had toppled the Congress government with help of eight other Congress MLAs – has been brought back today,” says a senior Congress leader in Dehradun. 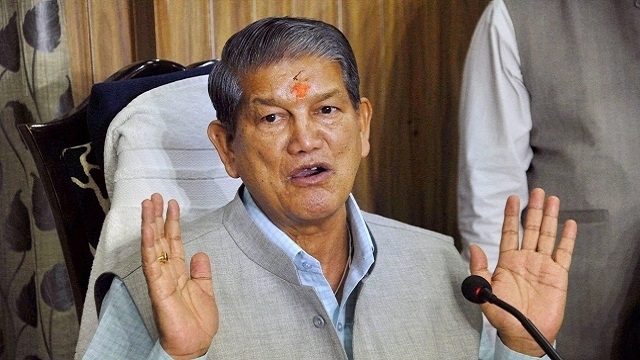 Explaining this further, a party leader from the Ganesh Godhiyal camp says that the party has already made it clear that Congress’s doors are open for those who left the party in 2016. “This is the reason why Yashpal Arya and his son were welcomed in the party before the election. They both are winning candidates,” the Congress leader adds.

However, it does not mean that Congress is likely to give Harak Singh Rawat a ticket to the seat of his choice like in the case of the other two MLAs who recently joined the party. The Congress leader has, however, added that only one ticket will be given, either to him or to his daughter-in-law.

“The compromise formula is clear that only one ticket would be taken, and the constituency would be decided by the high command after a discussion,” says the Congress leader, privy to the discussions behind the scenes.

Apparently, the time taken to decide on Harak Singh Rawat’s induction indicates how tricky the issue would have been for the Congress’s top brass in Delhi.

Now that Harak Singh Rawat is in the party, the most obvious question is what kind of impact will he have on Congress’ prospects in the elections, and how will the internal power dynamics within the Congress state unit change.

“His rejoining would intensify the internal feud, because now Harak Singh Rawat would join the trio of Pritam Singh, Ganesh Godhiyal and Ranjit Rawat who are anyway perennially at war with Harish Rawat in Uttarakhand. What I am more worried about right now is which group in the party will now call shots in finalising tickets,” says another senior Congress leader on the condition of anonymity.

Senior journalist D.S. Kunwar is of the view that Harak Singh Rawat’s decision to rejoin the Congress party after a gap of six years may help the party win or improve its vote percentage in several pockets in the Garhwal region, like in Lansdowne, Rudraprayag and Kedarnath assembly segments, where he has a good hold.

“He has a knack to win from any difficult seat. His comeback to Congress has not come as a surprise to me,” says Kunwar.

On the likely changes the party may face due to re-induction, Kunwar says, “Harak will not only help strengthen the Congress party but may also replace senior leader Harish Rawat. Harak may well become the real face of Uttarakhand Congress in the days to come.”

However, social activist Ratan Aswal has a different perspective.

“In my opinion, he should have fought the election as an independent candidate along with others for whom he was lobbying for tickets while being in the BJP. Now in the Congress, his wings would be clipped and it would not be easy for him to get a bigger role which he aims for desperately.”